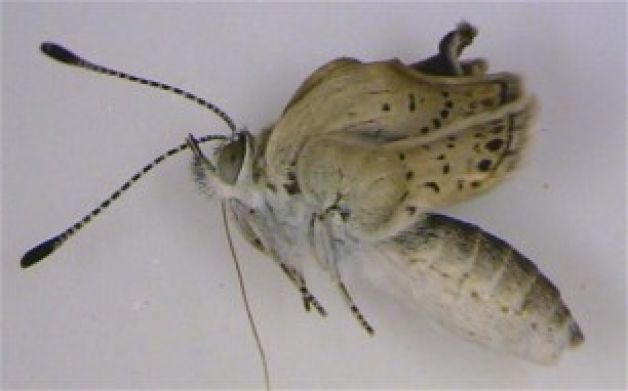 A new study published in Scientific Reports – Nature last week said that genetic mutations have been found in three generations of butterflies near Japan’s crippled Fukushima nuclear plant. Researchers concluded that artificial radionuclides from the Fukushima Nuclear Power Plant caused physiological and genetic damage to pale grass blue Zizeeria maha, a common butterfly in Japan. Scientists have also raised fears that radiation could affect other species as well. This study is one of the first to explore the genetic impacts of the disaster.

Features such as stunted wings, irregularly developed eyes, disfigured antennas and different color patterns found in butterflies from irradiated regions have led scientists to say they have found evidence to suggest a link between the genetic mutations and the radioactive material that was leaked into the environment last year.

Around 12 percent of pale grass blue butterflies that were exposed to nuclear fallout as larvae immediately after the tsunami-sparked disaster had abnormalities, including smaller wings and damaged eyes, researchers said.

The insects were mated in a laboratory well outside the fallout zone and 18 percent of their offspring displayed similar problems, said Joji Otaki, associate professor at Ryukyu University in Okinawa, southwestern Japan. That figure rose to 34 percent in the third generation of butterflies, he said, even though one parent from each coupling was from an unaffected population.

The researchers also collected another 240 butterflies in Fukushima in September last year, six months after the disaster. Abnormalities were recorded in 52 percent of their offspring, which was “a dominantly high ratio”, Otaki told AFP. “It has been believed that insects are very resistant to radiation,” Otaki told the BBC. “In that sense, our results were unexpected.”

Otaki said the high ratio could result from both external and internal exposure to radiation, from the atmosphere and in contaminated foodstuffs.

Otaki later carried out a comparison test in Okinawa exposing unaffected butterflies to low levels of radiation, with the results showing similar rates of abnormality, he said. “We have reached the firm conclusion that radiation released from the Fukushima Daiichi plant damaged the genes of the butterflies,” Otaki said. 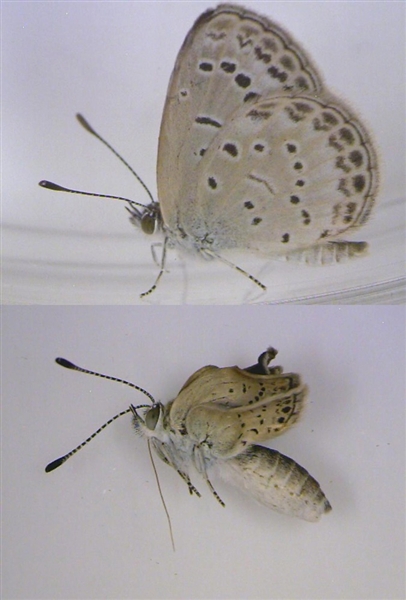 There are claims that the effects of nuclear exposure have been observed on successive generations of descendants of people living in Hiroshima and Nagasaki when the US dropped atomic bombs in the final days of World War II. But Otaki warned it was too soon to jump to conclusions, saying his team’s results on the Fukushima butterflies could not be directly applied to other species, including humans.

He added he and his colleagues would conduct follow-up studies including similar tests on other animals. Kunikazu Noguchi, associate professor in radiological protection at Nihon University School of Dentistry, also said more data was needed to determine the impact of the Fukushima accident on animals in general.

“This is just one study,” Noguchi said. “We need more studies to verify the entire picture of the impact on animals.”

Prompt and reliable evaluation of the biological influences of the artificial radionuclides from the Fukushima Daiichi NPP is lacking, and only a few studies have been performed to date. In the case of the Chernobyl accident, changes in species composition and phenotypic aberration in animals and an increase in the incidence of thyroid and lymph cancers in humans have been reported. Similarly, an increase in the incidence of cancers has been reported for atomic bomb survivors in Hiroshima and Nagasaki, Japan. However, the effects of low-dose radiation exposure on animals, including humans, are still a matter of debate despite the relatively rigorous documentation of physiological damage to animals from external high-dose radiation exposure. Moreover, one of the greatest concerns is the possible inheritance of the adverse effects of exposure by the offspring of the exposed individuals. However, experimental demonstration of genetic mutations in the germ-line cells that are inherited by the offspring of radiation-exposed parents has been scarce, although the germ-line damage was shown in barn swallows.

We address these important issues in connection with the recent Fukushima Dai-ich NPP accident. We use the pale grass blue butterfly Zizeeria maha (Lepidoptera, Lycaenidae) as an indicator species to evaluate the environmental conditions. A reliable rearing method has been established for this species. Butterflies are generally considered useful environmental indicators, and this species is particularly suitable for this purpose because it is widespread in Japan, including the Fukushima area, and because its wing colour patterns are sensitive to environmental changes. In the past, this species was used to evaluate the ecological risk associated with transgenic maize pollen.

The meltdown and explosion of the Fukushima Daiichi NPP occurred on 12 March 2011, when Z. maha was overwintering as larvae. On that date and thereafter, these larvae were exposed to artificial radiation not only externally but also internally from ingested food. In this study, we examine possible physiological and genetic changes in this butterfly in the Fukushima area resulting from damage by artificial radionuclides from the Fukushima Dai-ich NPP. We also evaluate the risk of external exposure and that of internal exposure to ingested radionuclides. 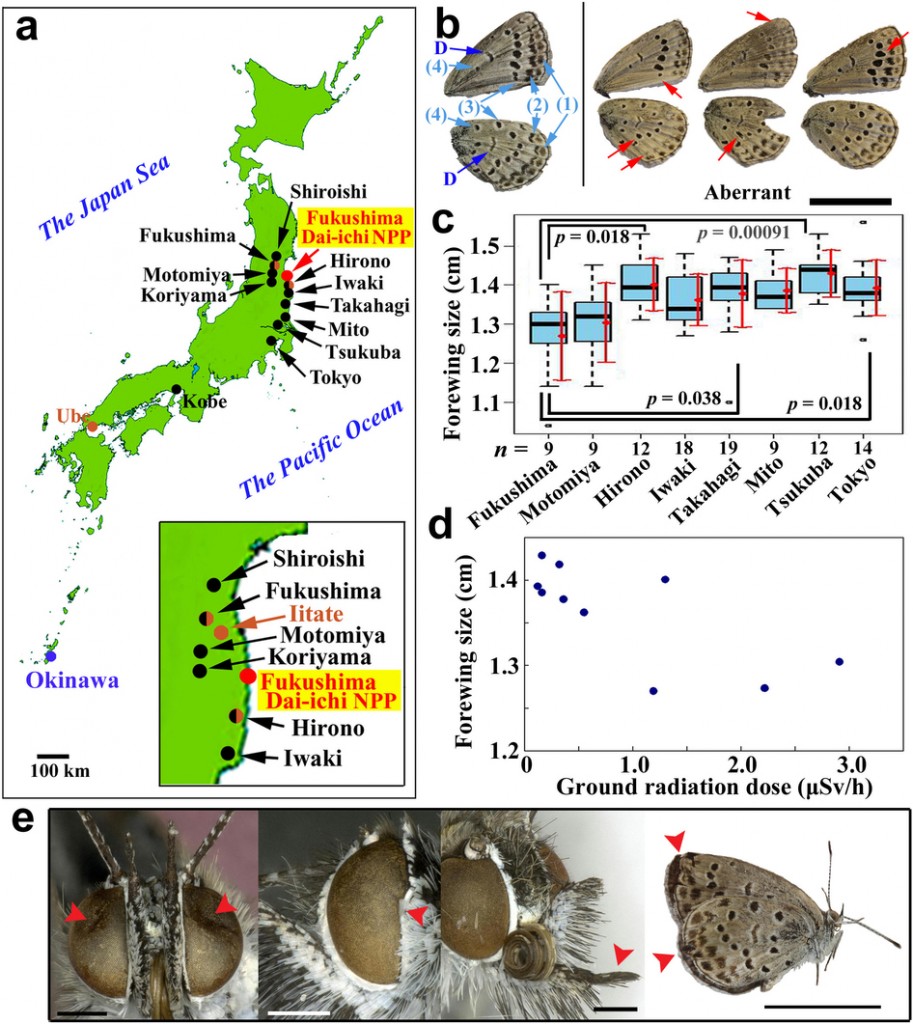