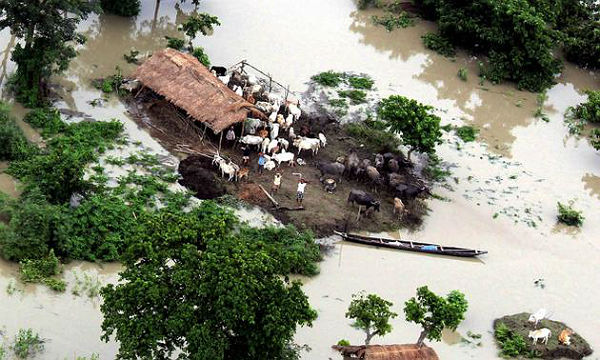 Floods and landslides caused dozens of casualties in northeastern India in late June and early July 2012. Local media reported 80 casualties. 2.2 million people are displaced from their homes as flooding monsoonal rains struck northeastern India hard. India’s Assam state has endured the worst of the flooding as the monsoon season kicked into high gear during the last week of June.

The Brahmaputra River and its tributaries had breached more than 40 levees. Thousands of homes, mostly made of bamboo and straw, had washed away in days of torrential rains. The floods also breached roads and bridges, and downed power lines. By July 2, 2012, the Brahmaputra River had spilled over its banks throughout the region. Water pooled on floodplains north and south of the river, with especially extensive areas of flood water south of Tezpur. 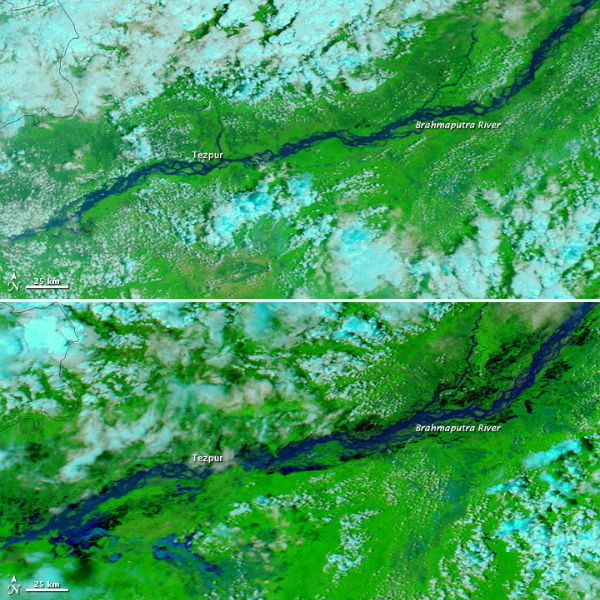 While the Indian state of Assam coped with severe floods, other parts of the country experienced monsoon rains that were lower than average, and the dry conditions jeopardized some crops. Flood waters also submerged more than 70 percent of the Kaziranga National Park, known for its tigers, one-horned rhinos and elephants.

The monsoon season, where rich moisture from the India Ocean streams onshore and contributes to torrential rainfall, had a slow onset with India drier than normal in early June. However, the opposite took place toward the end of the month with the monsoon hitting hard and fast. The situation worsened when a weather disturbance entered the picture and significantly enhanced the rainfall. 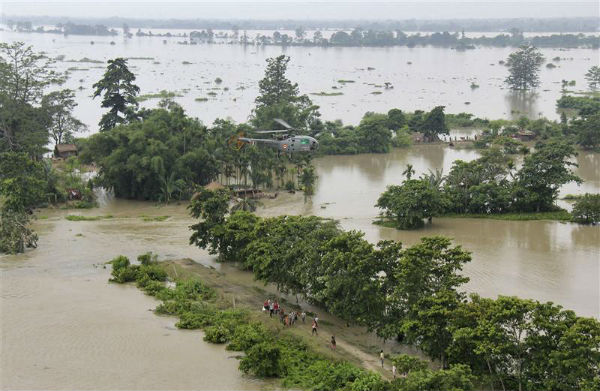 Even if this week’s forecast featured sunshine not rain, new flooding problems are sure to arise across Assam and neighboring Bangladesh as runoff from the heavy rain drains downstream in the swollen Brahmaputra River.

Featured image: People, stranded near a cattle shed, wave at a helicopter for help in the flood-affected area of Tezpur, in Assam recently (Credit: PTI)