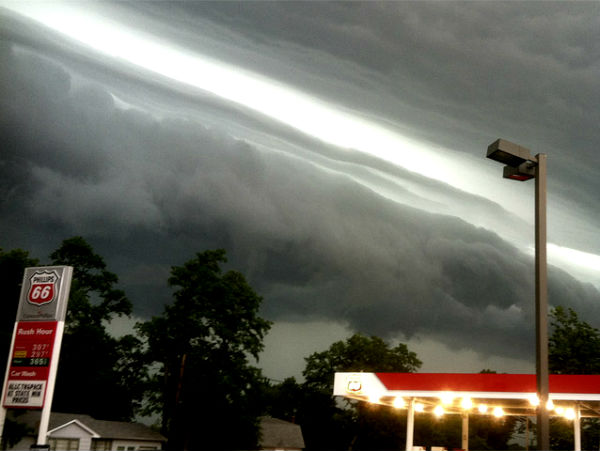 On June 29, 2012, a windstorm started in northwestern Indiana, and traveled more than 1,000 kilometers (600 miles) eastward across the Midwest and mid-Atlantic, cutting power to millions and killing thirteen people. More than 500 damaging wind reports were received by NOAA’s Storm Prediction Center (SPC) as the derecho took roughly 12 hours to race from northern Indiana to the southern mid-Atlantic coast.

The fast-moving storm toppled trees, downed power lines and left more than a million residents without power in the District of Columbia alone. Power companies warned it could take several days to restore electricity completely in some areas as much of the United States sweltered in a record-breaking heat wave. About 2.2 million homes and businesses from Illinois to New Jersey were still without power Monday morning, with the biggest concentration of outages in the Washington area. 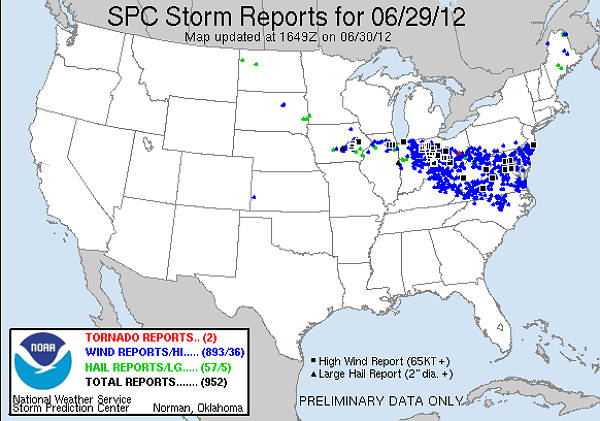 The storm was what meteorologists call a derecho. A derecho is defined as a widespread and long-lived wind storm that accompanies rapidly moving showers or thunderstorms. The most severe derechos are given the adjective “super.” Deriving its name from the Spanish term for “straight ahead,” derecho storms generally blow in one direction. They do not swirl like tornadoes, but they can cause tornado-style damage. The U.S. National Oceanic and Atmospheric Administration (NOAA) reported that the wind gusts in the June 29 derecho rivaled those of an EF-1 tornado. Winds gusted to 146,5 km/h (91 mph) at the Fort Wayne International Airport, Ind., Friday afternoon. 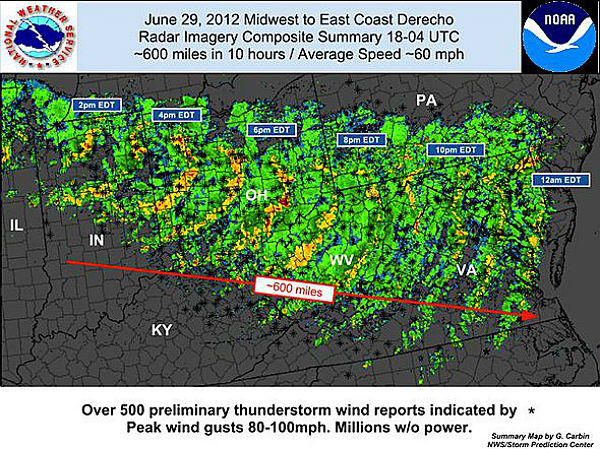 The June 29 derecho occurred along the boundary of two air masses. In the north, the air was stable and dry. In the south, the air was unstable and moist. And hot. The Capital Weather Gang reported that, before the derecho began, areas affected by the southern air mass were facing record-high temperatures – 43 degrees Celsius (109 degrees Fahrenheit) in Nashville, Tennessee, and Columbia, South Carolina; and 40 degrees Celsius(104 degrees ) in Washington, DC. This hot, humid air provided fuel for the windstorm, which pulled the air skyward, then returned it in violent downdrafts.

Derechos have occurred before, and were actually given their name in the late nineteenth century. They occur most often in the Midwestern and Great Lakes regions of the United States, between May and July. To qualify as a derecho, a storm must cause damage over 400 kilometers (240 miles) and pack wind gusts of at least 93 kilometers(58 miles ) per hour. The June 29 derecho damage extended over a much greater length, and the storm brought wind gusts of more than 145 kilometers(90 miles ) per hour. The June 29 storm did not just qualify as a derecho. It was, according to the Capital Weather Gang, “one of the most destructive complexes of thunderstorms in memory.” Derechos are most common in the Midwest and Great Lakes between May and July. The National Weather Service indicates they occur about once every four years in the D.C. area. They often form along the northern boundary of a hot air mass, right along or just south of the jet stream – where upper level winds zip along at high speeds. This derecho event is likely to go down as not only one of the worst on record in Washington, D.C. but also along its entire path stretching back to northern Indiana.

Derechos likely occur in other areas of the world where meteorological conditions are favorable for their development. However, only one such event has been formally documented in recent years. On July 10, 2002, a serial derecho occurred over eastern Germany and adjacent portions of neighboring European countries. In Berlin and surrounding areas, 8 people were killed and 39 were injured, mainly from falling trees. In Bangladesh and adjacent parts of India, a type of storm known as a “Nor’wester” occasionally occurs in the spring. From various descriptions and knowledge of the meteorological environments involved, it appears that some of these storms may be progressive derechos.

Derechos in the United States most commonly occur along two axes. One extends along the “Corn Belt” from the upper Mississippi Valley southeast into the Ohio Valley, and the other from the southern Plains northeast into the mid Mississippi Valley (figure below). During the cool season (September through April), derechos are relatively infrequent but are most likely to occur from east Texas into the southeastern states. Although derechos are extremely rare west of the Great Plains, isolated derechos have occurred over interior portions of the western United States, especially during spring and early summer. 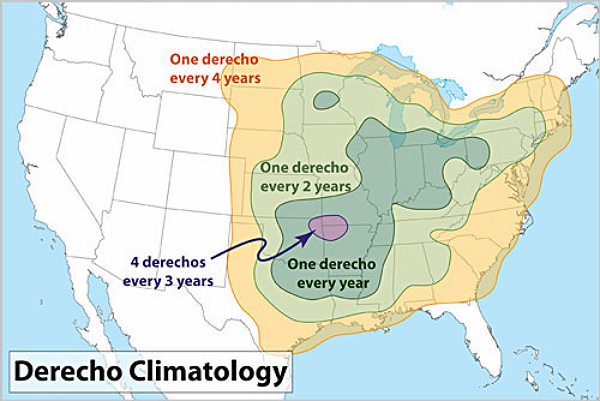 Here is a list of selected of scientific papers about derechos and the convective systems responsible for their development. In addition to presenting analyses of some well-documented events, these papers describe what is known about the formation and mechanics of derecho-producing convective systems.