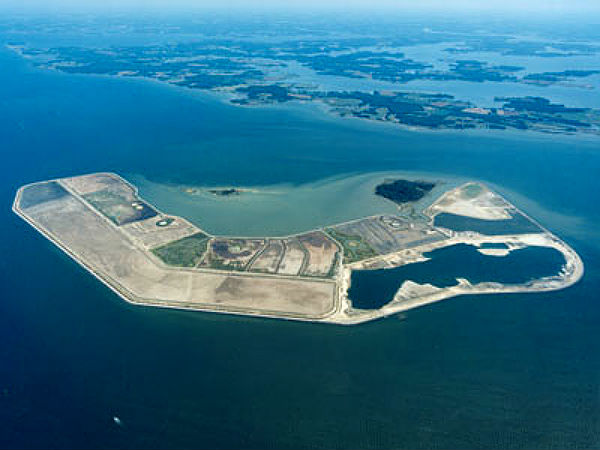 The crust under the Chesapeake Bay is sinking, while sea levels are rising. Made of clay and silt, the islands erode quickly, and many have disappeared altogether. Small islands were once a nesting  habitat for water birds and turtles, while the larger islands supported fishing communities along with wildlife. These islands are now eroded under the combined forces of geology and climate change.

Poplar Island ranks among those that would have been gone a decade ago if not for a massive restoration project. In the 1800s, the island had an area just over 1,000 acres and held a small town of about 100 people. By the 1990s, the island was nearly gone, containing a mere 10 acres of land. 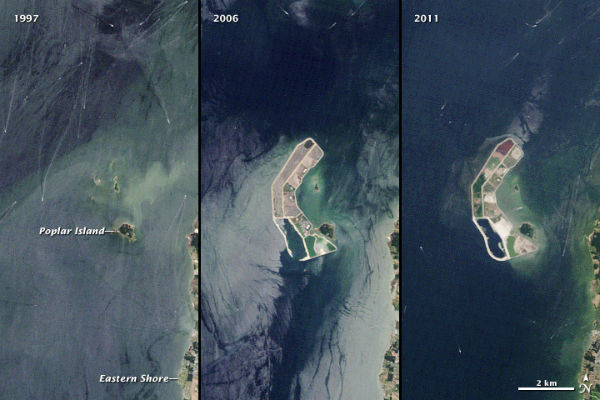 In 1998, the U.S. Army Corp of Engineers began to restore Poplar Island. Besides restored habitat to birds and turtles, it provides a use for material dredged from Baltimore Harbor and Chesapeake Bay shipping lanes. Engineers built dikes around sections of the island and have been gradually filling in the center with dredged silt. By 2006, the island had regained the shape it held in the 1800s. Approximately 68 million cubic yards of dredged material will be placed to develop 735 acres of wetlands, 840 acres of uplands and 140 acres of open water embayment.

As each cell is filled with new soil, the Army Corp of Engineers plants vegetation. Poplar Island now has an area of 1,140 acres and may continue to expand by another 500 acres before the restoration is completed in 2027. Upon completion, Poplar Island will be half wetlands and half uplands covered by forest.

Submerged aquatic vegetation (SAV), also called bay grass, supports a diverse community of fish, shellfish, invertebrates and waterfowl. Ospreys, egrets, terns, herons, eagles, double-breasted cormorants, black ducks and other wild fowl have already discovered an enlarged Poplar Island, unfazed by workers and heavy equipment that move and shape the dredge material that is bulldozed onto the island from barges. Diamondback terrapins are nesting in large numbers on the island, predominantly along the sandy beaches of the southeast shoreline. 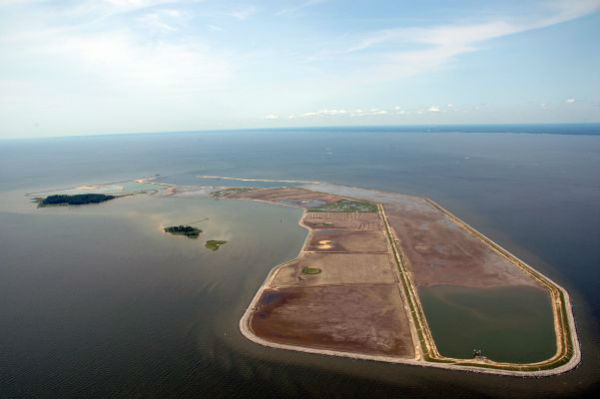 Islands and shorelines in the Mid-Atlantic may become increasingly vulnerable to erosion. Sea levels are rising as the ocean warms and expands – and as glaciers and ice sheets melt. Currents, salinity, and topography create areas where sea levels are increasing more quickly.

Here you can watch short animation of the Poplar Island restoration by the NASA Scientific Visualization Studio.