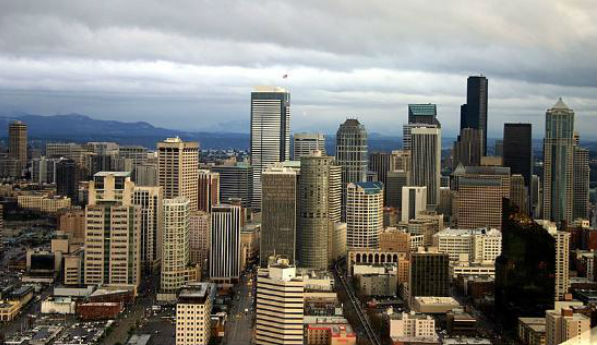 The Seattle Fault, a zone of east-west thrust faults under the Puget Sound and Seattle, last ruptured in a magnitude-7.0 to -7.5 earthquake about 1,100 years ago. It’s due for another one, but scientists don’t know when that might happen. However, they warn that an expected big quake could be even bigger than previously thought. The biggest concerns are landslides and tsunamis.

The deep basin that lies beneath Seattle is a source of seismic worry for scientists because the shape and material of the basin amplify ground shaking. The basin under Seattle essentially holds complex layers of sediment within a bowl of rock. Such basins can trap and focus seismic energy within them. This is due to how different materials conduct seismic waves — they move slower in sediment layers than in solid rock.

Scientists from the University of Washington point that the quake could be larger and affect a wider area than they had calculated. They used to think that the Seattle Fault had a very narrow zone that was deformed during the last major earthquake, but new evidence shows that the zone of deformation was actually several kilometers wider. 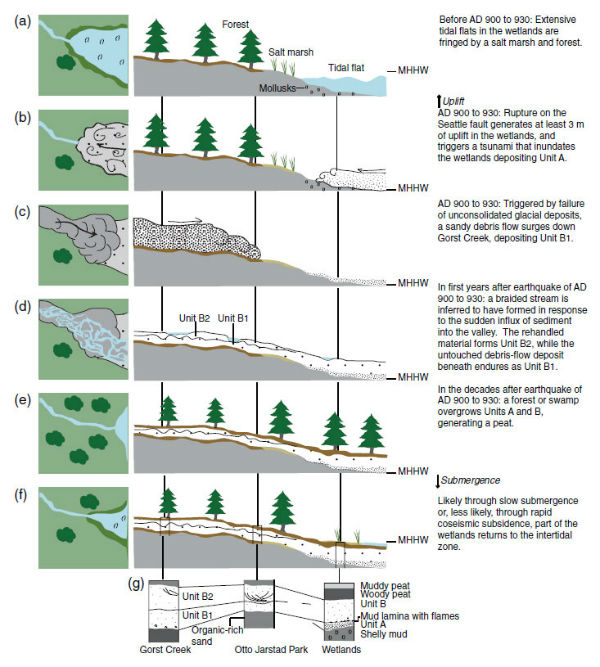 Scientists looked for evidence in a coastal marsh near Gorst, Washington. Geophysical models of the fault predicted that the prehistoric quake didn’t deform this area. They found a layer of big cedar trunks, forest peat and seeds and leaves from land plants directly on top of a layer full of clams, mussels and mud. Together, the two layers are evidence that the quake suddenly lifted land in an intertidal zone, turning it into a forested zone. Parts of the marsh had been lifted about 3 meters (10 feet) during the quake. And a sandy layer deposited by a tsunami and a layer of forest turf torn up during a landslide showed that at least two violent events accompanied the major earthquake.

Research by a geologist Maria Martin Arcos indicates that a zone 10 to 12 kilometers (6 to 7 miles) wide could be deformed in a future quake with a magnitude up to 7.5. Previous estimates showed the danger zone was only about 7 to 8 km (4 to 5 miles) wide.

“We know where most of the big plate boundary faults are, and we have some ideas as to how they behave. But for these smaller faults, we don’t really know where all of them are or how all of them behave. This fault runs right under the city of Seattle, and we’re still finding new things almost every year.” geologist Maria Martin Arcos

Arcos’ research is detailed in the June 2012 issue of the journal Bulletin of the Seismological Society of America. 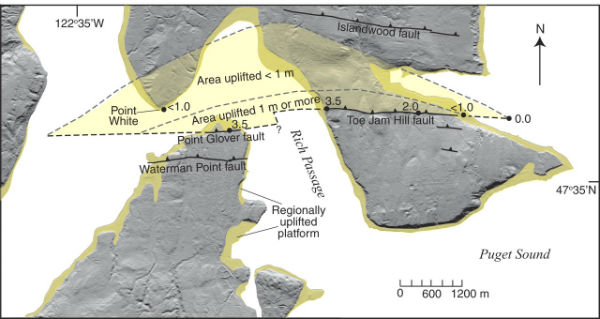 The Seattle Fault is a zone of multiple shallow east-west thrust faults that cross the Puget Sound Lowland and through Seattle in the vicinity of Interstate Highway 90. The Seattle Fault was first recognized as a significant seismic hazard in 1992 when a set of reports showed that about 1100 years ago it was the scene of a major earthquake of about magnitude 7, an event that entered Indian oral legend. Extensive research has since shown the Seattle Fault to be part of a regional system of faults.

The Seattle Fault (and the related Tacoma Fault) is not the only source of earthquake hazard in the Puget Lowland. Other faults in the near surface continental crust, such as the  South Whidbey Island Fault (near Everett), and the yet to be studied Olympia Fault (near Olympia), though historically quiescent, are suspected of generating earthquakes of around magnitude 7. Others, such as the 2001 Nisqually earthquake, originate about 50 to 60 km below Puget Sound in the Benioff zone of the subducting Juan de Fuca plate; being so deep their energy is dissipated. And there are the infrequent but very powerful great subduction events, such as the magnitude 9 1700 Cascadia earthquake, where the entire Cascadia subduction zone, from Cape Mendocino to Vancouver Island, slips.