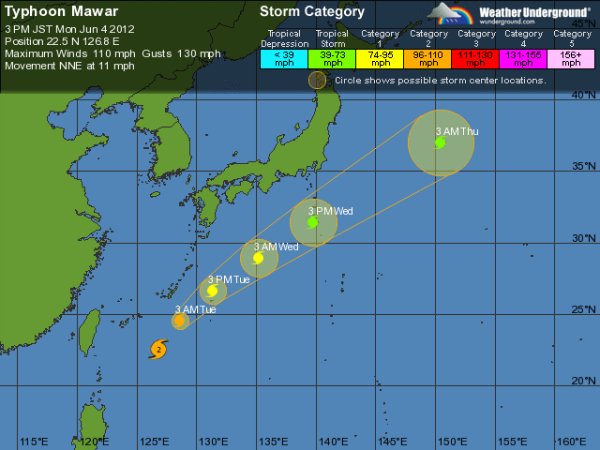 According to PAGASA,  Typhoon Mawar was estimated based on satellite and surface data at 490 km east-northeast of Basco, Batanes (22.7°N, 126.6°E) with maximum sustained winds of 140 km/h near the center and gustiness of up to 170 km/h. It is forecast to move north-northeast at 17 km/h. Meanwhile, the Low Pressure Area (LPA) was estimated based on satellite and surface data at 760 km east of Southern Mindanao (6.8°N, 133.0°E).  Minimum pressure is 960 hpa. Favorable conditions surrounding the storm could allow it to further intensify over the next 24 hours as it passes to the east of Taiwan. Although the storm's center will remain several hundred kilometers east of Taiwan, rain and gusty winds will be possible, especially for the eastern half of the island and the mountains during Monday and Monday night. Reports from the Taiwan Central Weather Bureau show rainfall amounts in excess of 287 mm (11 inches) have already fallen in some of the mountainous areas of the northeast with heavy rain possible through Monday night. 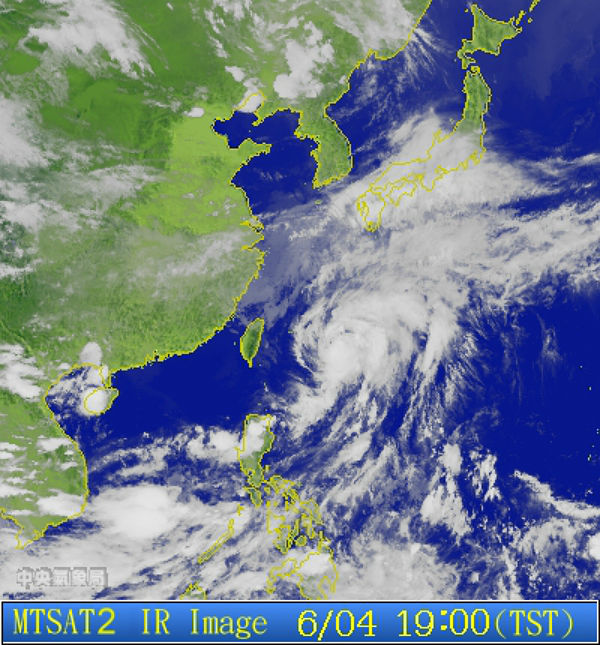 The storm will then approach the Ryukyu Islands of Japan on Monday night into Tuesday where damaging winds and flooding rainfall are expected. A trough to the northeast of Japan is expected to turn Mawar more to the northeast later on Tuesday and cause the storm to track off the Japan coastline on Tuesday night into Wednesday. The storm is not expected to make a direct landfall, however strong winds and heavy rainfall are possible especially near the eastern coastline of southern Honshu, including areas as far north as Tokyo.