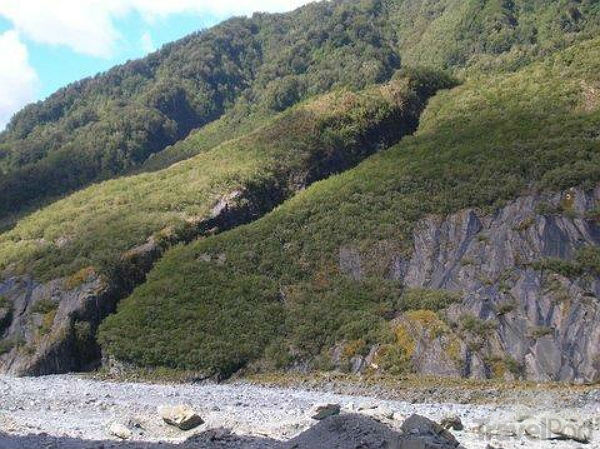 Researchers recorded New Zealand’s deep tremors lasting up to 30 minutes on its biggest fault line – the Alpine Fault, which runs the length of the South Island. The quakes, which caused no surface damage, occurred 20-45 kilometres (12-28 miles) beneath the Earth’s crust and continued for as long as half an hour, much longer than ordinary earthquakes. Scientists have been puzzled for decades by an apparent absence of earthquakes in the central section of the Alpine Fault, between Fox Glacier and Whataroa Valley 50km to the north. The Alpine Fault has ruptured four times in the past 1000 years.

Researchers from Wellington’s Victoria University had to place sensors in boreholes 100 metres deep to pick the quakes because the quakes could not be measured by regular seismic monitoring devices. An array of 11 stations, called the Southern Alps Microearthquake Borehole Array  – or SAMBA –  were installed in late 2009 and are still producing data. To date, SAMBA has recorded around 2,500 small earthquakes which are taking place in a 30 kilometre-wide area under the Southern Alps, rather than on the Alpine Fault. It’s only the second time that this type of seismic activity has been recorded on a strike-slip fault, which are those with walls that move sideways rather than up or down. The other is the San Andreas Fault in California. The research shows that between large earthquakes, the fault is still moving. It’s not yet clear what this means for future earthquakes – it could be that constant tremor builds up stress and may trigger a major fault movement or, alternatively, the activity may decrease the likelihood of a major quake by acting as a release valve for stress.

The government’s GNS Science agency estimates the Alpine Fault has generated four quakes of magnitude 8.0 or higher in the past 900 years, most recently in the early 1700s, and another is overdue. There is a high probability one will occur in the next 40 years, producing “one of the biggest earthquakes since European settlement of New Zealand (which) will have a major impact on the lives of many people”. The 6.3-magnitude quake that killed 185 people in the South island city of Christchurch in February last year lasted just 37 seconds and struck at a depth of about five kilometres. The Christchurch earthquake was not caused by the Alpine Fault but a previously unknown fault line, part of a network of seismic fractures criss-crossing New Zealand, which lies on the junction of two tectonic plates. (Victoria University of Wellington)

The research findings have been published in a top-rated American journal, Geophysical Research Letters, which specialises in short papers on recent and important discoveries. 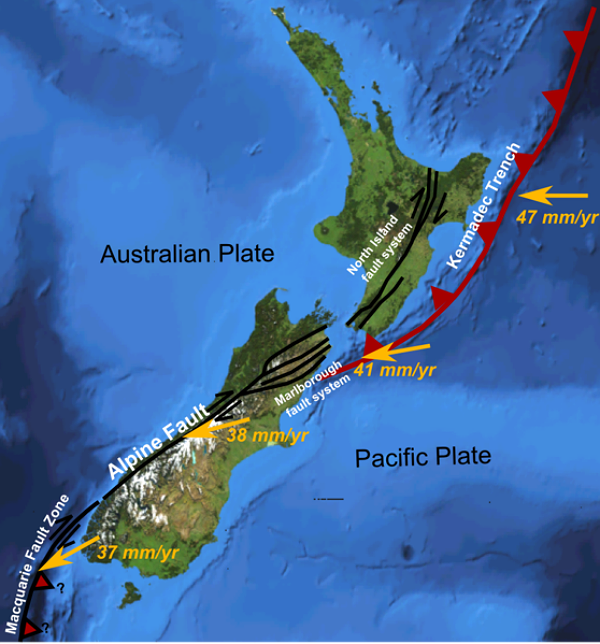 The Alpine Fault runs through the Southern Island of New Zealand from the latitude of 44°S – 42°S and the longitude of 168°E – 173°E. It’s the transform boundary between the Pacific Plate and the Indo-Australian Plate. Transform boundaries mean that plates are moving side to side against each other, instead of colliding with one another or splitting apart. Earthquakes occur on this fault, from the plates sliding against each other, and have formed the Southern Alps.

The Alpine fault connects two “subduction” margins where the ocean floor descends into the Earth’s mantle. At this point the surfaces of the two plates making up the South Islands alpine fault meet. The Pacific Plate on the easterly area of New Zealand is moving westwards and the Australian Plate, on the western side of New Zealand moves eastwards. They move at a relative rate of about 45mm per year.

As these two plates move against each other enormous pressure builds up which must eventually be released through earth movement. The result is a major earthquake along the Alpine fault. The pressure has been continually building for about 280 years since it was last released by a large earthquake in 1717 AD.

The Alpine Fault has had 5 major earthquakes in the past century—the most recent occurring in 2009. Aside from direct earthquakes, there has been four large ruptures along the fault line, which can offshoot high magnitude earthquakes. From looking at the time of past ruptures, scientists predict that the next major rupture could happen at any time, since it has been the longest time between ruptures in  the last thousand years.

According to Associate Professor Tim Davies at Cromwell, Wanaka and Queenstown, the next earthquake centred on the Alpine Fault should begin in South Westland and will probably have a magnitude of 8+. 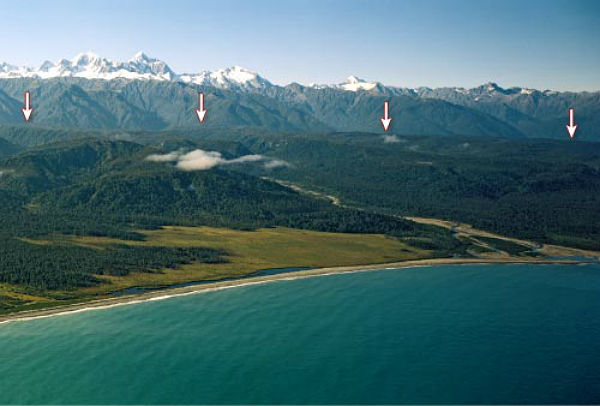