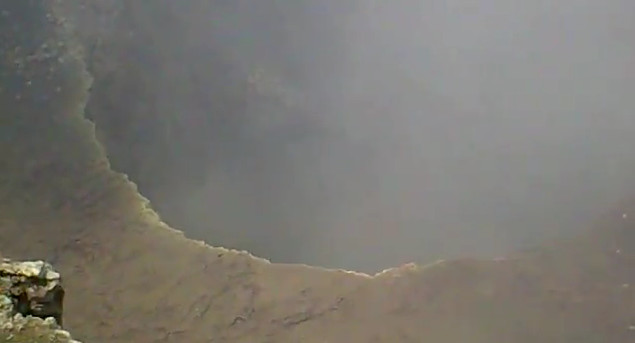 Nicaraguan experts reported Sunday, April 29, 2012 more seismic activity at Masaya volcano, about 20 kilometers south of Managua, with an increase in expulsions of sulfur gases, which keeps the disaster warning system in high alert.

According to the report, a crack in the main crater causes higher emissions and a sound similar to a jet engine.

Specialists of the National System for Prevention, Mitigation and Attention to Disasters (SINAPRED) and the Nicaraguan Institute of Territorial Studies (INETER), told the press that they detected this unusual behavior several days ago, but for now there is no reason for alarm.

The INETER geophysics director, Angelica Munoz, told the site El 19 Digital they monitor Masaya situation closely because of rising emissions and temperature above the normal range.

Technical teams assess the seismic tremor, but there is no emergency declared and the gates of Masaya Volcano National Park remain open to the public, said the director of INETER, Jorge Castro, and the executive secretary of SINAPRED, Guillermo Gonzalez.

Masaya is one of Nicaragua’s most unusual and most active volcanoes. It lies within the massive Pleistocene Las Sierras pyroclastic shield volcano and is a broad, 6 x 11 km basaltic caldera with steep-sided walls up to 300 m high. The caldera is filled on its NW end by more than a dozen vents that erupted along a circular, 4-km-diameter fracture system.

The twin volcanoes of Nindirí and Masaya, the source of historical eruptions, were constructed at the southern end of the fracture system and contain multiple summit craters, including the currently active Santiago crater. A major basaltic plinian tephra was erupted from Masaya about 6500 years ago. Historical lava flows cover much of the caldera floor and have confined a lake to the far eastern end of the caldera.

A lava flow from the 1670 eruption overtopped the north caldera rim. Masaya has been frequently active since the time of the Spanish Conquistadors, when an active lava lake prompted attempts to extract the volcano’s molten “gold.” Periods of long-term vigorous gas emission at roughly quarter-century intervals cause health hazards and crop damage.

In 1979, Masaya became Nicaragua’s first National Park, named Masaya Volcano National Park (Parque Nacional Volcan Masaya). The National Park has an area of 54 km² includes two volcanoes and five craters, as well as a range of elevations between 100 and 630 meters above sea level. It is the only volcano in the western hemisphere where you are able to drive to the rim.