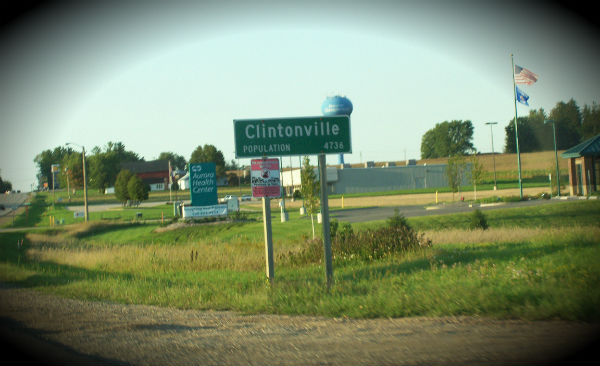 Unidentified booms, rumbles, shakes and sounds resembling explosions were reported by residents in the City of Clintonville on the evening of Sunday, March 18. Five loud, mysterious booms thundered through the town at approximately two-hour intervals starting at around 8 p.m. They occurred again the following night, and, much to the sleepless residents’ relief, finally stopped Tuesday night. The town thought it was over, but then it started again Wednesday night. Accompanying the sounds are vibrations that have shaken homes and household objects in the northeast corner of town, city manager Lisa Kuss said. There are indications from witnesses that the booming is spreading to areas south and west of the original locations, reported WTAQ. The original area of the booms was in the northeast part of the city. 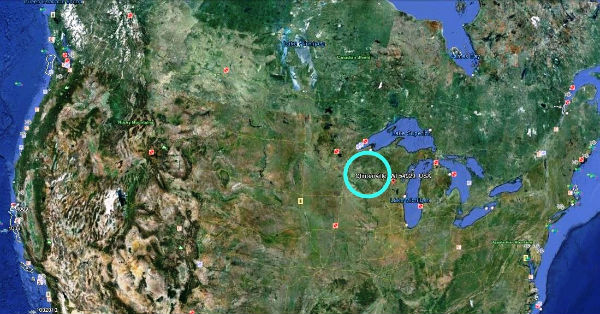 (Clintonville residents describe what the rumbling felt like and their possible explanations in this video.) And here is a link to map of reported incidents.

Mysterious sounds and rumble have been reported in Montello, 80 miles south of Clintonville on March 21.  A loud rumble around 5-thirty last night immediately triggered calls to the police department. University of Wisconsin-Madison seismologist Harold Tobin said at this point he is not aware of any seismic readings or reports of the boom near Montello. 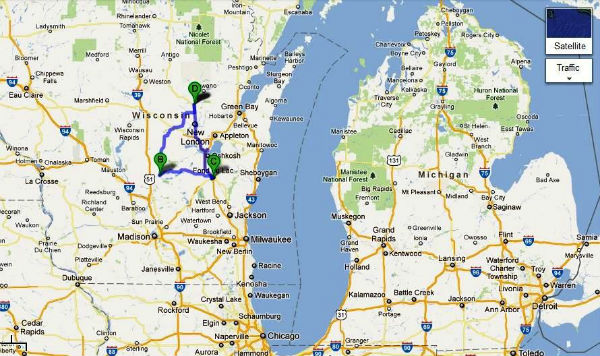 A similar incident was reported in Marion, near Clintonville, about two decades ago, and in Georgia more recently. The vast majority of unexplained sounds are faint, ambiguous, and transitory. For example there’s the Taos Hum, a low-frequency rumble heard by some residents in Taos, N.M. since the early 1990s. Not everyone hears it, but those who do variously describe it as sounding like a running refrigerator or a buzzing bee. Recent media accounts include reports from North Carolina, Idaho, Tennessee and others. In some cases, videos of supposed “mystery noises” have been revealed as hoaxes. 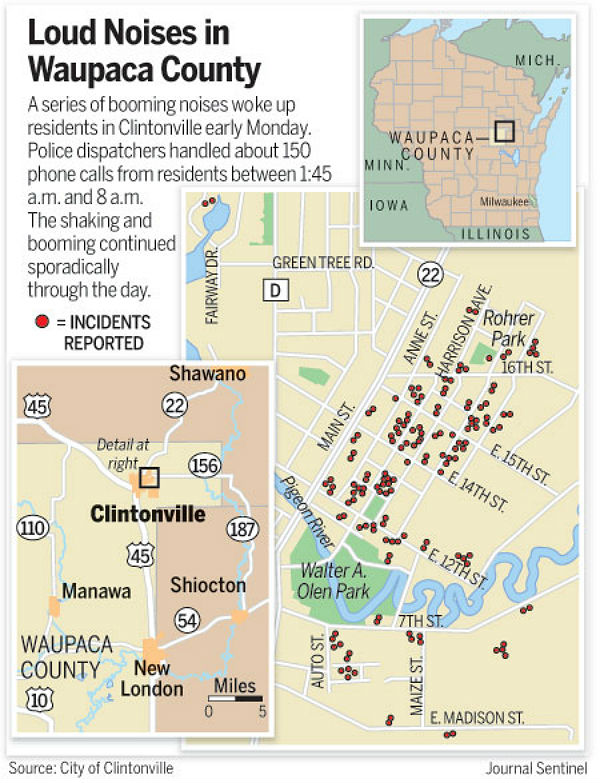 After receiving hundreds concerned calls about the sounds, police investigated and found nothing. There were no known gas or sewer explosions, no landslides, no military exercises, nor mining explosions. Some think it might be related to sonic booms, groundwater, or earth settling – though no earthquakes have been recorded. The U.S. Geological Survey confirms it recorded a low-level, 1.5-magnitude earthquake at 12:15 Tuesday morning at depth of 5 km (3.1 miles)(44.627°N, 88.757°W). University of Wisconsin-Madison geologists said the noises and vibrations were not typical of earthquake activity. An earthquake in Wisconsin is extremely rare. The USGS says the last time a quake struck in Wisconsin was in 1947.   A seismic station in Shiocton, about 15 miles southeast of Clintonville, recorded unusual ground shaking in the area.  They say the quake was so small that you had to be within a five-mile radius of the quake’s epicenter in order to feel it.

Clintonville City Administrator Lisa Kuss states that the underground activity has been confirmed and is not an earthquake. During a public meeting Thursday night, several citizens said they’ve felt vibrations for the last six months.  No one had ever reported this type of activity until this week.  In fact, the number of reports has dramatically gone down: 150 called police early Monday morning, 100 on Tuesday, 40 on Wednesday, and only 4 on Thursday morning. Even though a 1.5 magnitude quake isn’t typically felt, Kuss says the granite 3 miles under Clintonville may have intensified the vibrations. City administrator Lisa Kuss, addressing a crowd of about 400 people Wednesday night at a public hearing to talk about the phenomenon, said the city will spend $7,000 to hire Waukesha-based engineering firm Ruekert & Mielke. The firm will place four seismometers around the city to try to locate the epicenter of the strange sounds. According to Tom Evans, Assistant Director with the Wisconsin Geological and Natural History Survey (WGNHS), Wisconsin has experienced about a dozen minor events attributed to low seismic activities in the last 100 years. He says Wisconsin sits on a relatively stable part of the continent.

U.S. Geological Survey scientist David Hill published a paper in 2011 called, “What is That Mysterious Booming Sound?” Such sounds are so commonplace in upstate New York, they earned the nickname “Seneca guns.” They’re also well enough known to be named by residents of Belgium, the countries around the Bay of Bengal, Italy and Japan, among other places. One possible explanation is gas explosively escaping from underground rock formations. Another is a rock burst, which can happen when mining or quarrying uncovers long-buried rock, suddenly relieving stress and resulting in “locally loud, explosive reports.” Others include meteorites, a phenomenon known as “booming sands” or even distant thunder, sounds that can be carried for significant distances under proper atmospheric conditions.

Why is it hard to locate the sound?

Sound travels in waves, and identifying the source of a sound can be very difficult in urban areas where concrete, glass, and buildings can reflect, change, and amplify sound waves.Those nearest the sound will, in theory, hear it the loudest. However there are confounding factors; for example people farther away may hear it more loudly than people living closer but who have large buildings in between them and the source of the sound that dampen the volume. Without some objective measure of how loud the sound is, witnesses may have difficultly describing variation in volume: was it “loud” or “really loud?” To most people awakened in their beds very early in the morning by the boom, the most likely response would be an annoyed “too damn loud.”

The first step to locating the source of the sounds would be to place a dozen or more carefully calibrated audio recorders on a grid system throughout (and surrounding) the town. The next time a mysterious boom is recorded, scientists can collect data from all the recorders, determine which microphones recorded the highest volume, and triangulate the location from that information.