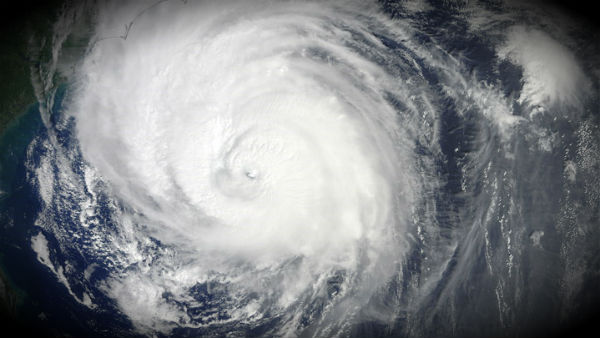 The Saffir-Simpson Hurricane Wind Scale (SSHWS) is undergoing a minor modification in 2012 to resolve “awkwardness” associated with conversions among the various units used for wind speed in advisory products. The new modification is to help clarify categorization of wind speed measurements based on miles per hour (mph), kilometers per hour (km/h) and knots. There is an inherent uncertainty when estimating wind speeds for tropical cyclones. Wind speeds are basically rounded because it’s to hard to identify exact wind speeds.

The change broadens the Category 4 wind speed range by one mile per hour (mph) at each end of the range, yielding a new range of 130-156 mph. This change does not alter the category assignments of any storms in the historical record, nor will it change the category assignments for future storms according to NHC. (The reasoning behind this change and a tabulation of the old and new scales is available here).

The new categories are shown in this NHC graph below: 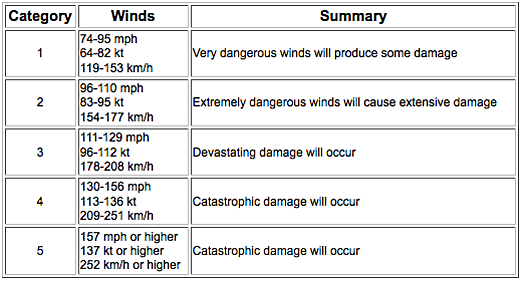 The Saffir-Simpson Hurricane Wind Scale is a 1 to 5 categorization based on a hurricane’s intensity at an indicated time. The classifications can provide some indication of the potential damage and flooding a hurricane will cause upon landfall. It classifies hurricanes that exceed the intensities of tropical depressions and tropical storms — into five categories distinguished by the intensities of their sustained winds. To be classified as a hurricane, a tropical cyclone must have maximum sustained winds of at least 74 mph (33 m/s; 64 kn; 119 km/h) (Category 1). The highest classification in the scale, Category 5, is reserved for storms with winds exceeding 156 mph (70 m/s; 136 kn; 251 km/h).

Officially, the Saffir–Simpson Hurricane Scale is used only to describe hurricanes forming in the Atlantic Ocean and northern Pacific Ocean east of the International Date Line. Other areas use different scales to label these storms, which are called “cyclones” or “typhoons”, depending on the area. 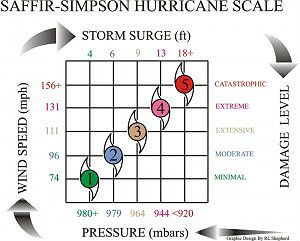 Most weather agencies use the definition for sustained winds recommended by the World Meteorological Organization (WMO), which specifies measuring winds at a height of 10.1 m (33 ft) for 10 minutes, and then taking the average. By contrast, the U.S. National Weather Service defines sustained winds as average winds over a period of one minute, measured at the same 10.1 m (33 ft) height.

Central pressure and storm surge values are approximate and often dependant on other factors, such as the size of the storm and the location. It is not uncommon for a pressure to be significantly higher or lower than expected for a specific category. Generally, large storms with very large radii of maximum winds have the lowest pressures relative to its intensity.

According to Robert Simpson, there are no reasons for a Category 6 on the Saffir-Simpson Scale because it is designed to measure the potential damage of a hurricane to manmade structures. If the wind speed of the hurricane is above 155 mph (249 km/h), then the damage to a building will be “serious no matter how well it’s engineered”. (Wikipedia)