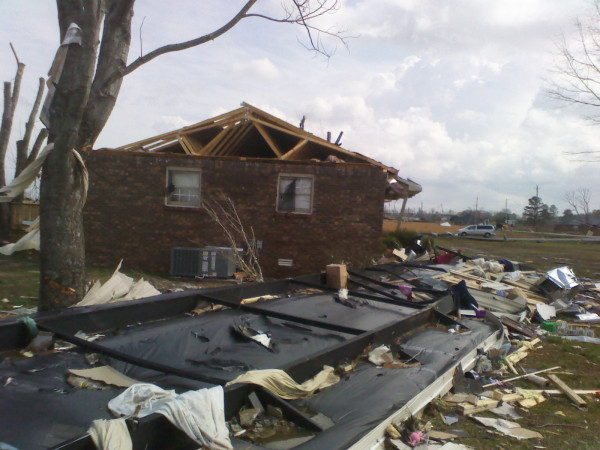 Reports of serious damage are pouring in and situation is getting worse. Storms are headed towards huge population centers like New York City, Boston, Philadelphia…

Severe storms started hammering an area from Missouri into Illinois, Indiana, Tennessee, Kentucky and South Carolina with large hail up to the size of baseballs early this morning.

Powerful storm system stretching from the Gulf Coast to the Great Lakes flattened buildings in several states, wrecked a small Indiana town and bred anxiety across a wide swath of the country in the second powerful tornado outbreak this week. Authorities in Indiana say at least three people have been killed by tornadoes raking the southern portion of the U.S. state.

Widespread damage was reported in southern Indiana, where Clark County Sheriff’s Department Maj. Chuck Adams said the town of Marysville is “completely gone.” Dozens of houses were also damaged in Alabama and Tennessee two days after storms killed 13 people in the Midwest and South.

After a relatively benign February, the 2012 Severe Convective Storm season in the United States has brought damage and possible significant losses with eight tornadoes reported yesterday and about 43 tornadoes reported today. This brings the season total through March 1 to 195, higher than the average of 117 over the past six years according to latest EQECAT report.

At 4:56 am CST, February 29, an EF-4 tornado that was part of a larger extra-tropical cyclone, struck the town of Harrisburg, Illinois with population of 9000 people. Initial surveys indicate the tornado was accompanied by estimated winds of 180 mph (300 kph). Preliminary reports indicate that the tornado killed six people and injured nearly 100 in the city of Harrisburg. According to the Harrisburg sheriff’s office, 250-300 houses were damaged or destroyed. Additional surveys will be conducted by the National Weather Service in the next day or two.

The NWS has confirmed well over 50 tornado reports (separate).. right now at 5:45pm CST — there are over THIRTY (30) active TORNADO WARNINGS issued by the National Weather Service.. … these are WARNINGS … not just tornado watches… but actual confirmed tornadoes developing.

The time to prepare is now for these areas in the path of this outbreak. (sincedutch.wordpress.com)

5:20 p.m. CST: A tornado was reported on the ground in Crockett, Ky. The storm produce 3 inch hail.

4:22 p.m. CST: A tornado was reported on the ground in Bentonville, Ohio.

12:07 p.m. CST: An unconfirmed report came in about a funnel cloud in Cape Girardeau, Mo.

11:06 a.m. CST: A tornado was reported by the public 6 miles northeast of Ellsinore, Mo.

10:19 a.m. CST: Trees were downed, cars were damaged and a farm house was destroyed near Buckhorn High School, located 4 miles east-northeast of Moores Mill, Ala. People were trapped in rubble with injuries.

9:56 a.m. CST: Rain-wrapped tornado reported on the ground 4 miles southeast of Harvest, Ala.

9:40 a.m. CST: Law enforcement spotted a tornado near Route 1 in Meridianville, Ala.

9:25 a.m. CST: A very dangerous storm with strong rotation, potential tornado on the ground north of Huntsville, Ala. It strengthened east of Athens and was headed toward Harvest.