Tropical cyclone Funso still a danger to Mozambique and Madagascar

Tropical Cyclone Funso intensified to the strength of a Category 4 hurricane as it churns off the coast of southern Africa with winds in excess of 130 mph. TC Funso slammed the nation's north-central provinces, particularly Zambezia, last Friday into Monday with high winds, torrential rain and pounding waves. Tropical depression Dando landed with flooding rain and damaging winds near the country's capital of Maputo early last week. This two tropical systems have claimed at least 25 people in Mozambique according to local media. Funso remains active in the Mozambique Channel and at 10am on 25 January was about 230km off the coast of Inhambane Province. Its intensity decreased from category four to category three with sustained winds exceeding 155km/h. Rain with thunderstorms and strong winds, above 70km/h, will continue to affect the Inhambane districts of Inharrime, Panda, Jangamo, Homoíne, Inhambane City, Maxixe, Morrumbene, Massinga Vilankulo and Inhassoro. 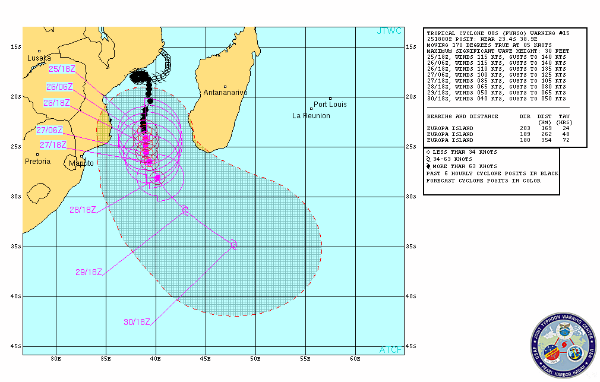 The storm system is located aproximately 370nm northeast of Maputo, Mozambique and has tracked southward at 5 knots over the past six hours according to JTWC. Significant wave height is 30 feet. The warm waters of the Mozambique Channel, which lies in between southern mainland Africa and Madagascar, continues to fuel Funso's intense strength. TC Funso still remains over the open waters of Mozambique Channel but if it were to strike land, lives and property would be in severe peril. Extremely dangerous surf  pound both coastlines. Conditions will improve throughout the Mozambique Channel later Friday into this weekend as Funso pushes away from Africa and into the open waters of the southern Indian Ocean.

Tropical depression Dando, which made landfall on 16 January north of the capital Maputo, was the fiercest tropical storm to strike the area since Storm Domoina in 1984. A few days later Cyclone Funso veered from an expected landfall in the north of the country and headed back into the Mozambique Channel, but the effects of the weather system were still felt. Dando has washed away about 60 metres of the main north-south road about 100km north of Maputo, where wind speeds of up to 70km/h and heavy rainfall led to flooding and damage to houses and schools. 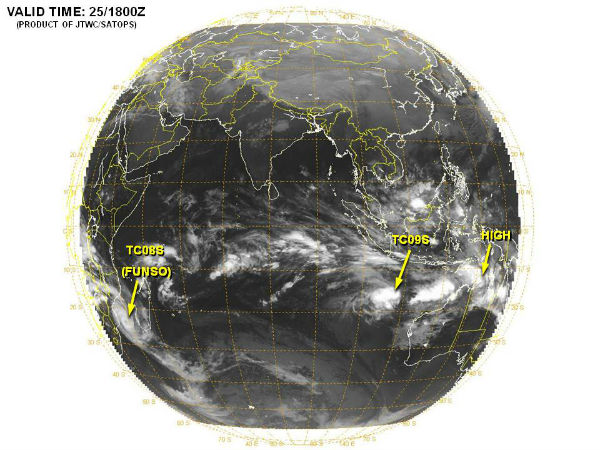