Light pollution not only threatens our “right to starlight”, but also affects energy consumption, wildlife and health. For the past six years, the GLOBE at Night campaign has been involving people in 115 countries. The GLOBE at Night program is an international citizen-science campaign designed to raise public awareness of the impact of light pollution on our night skies. GLOBE at Night aims to raise awareness by inviting citizen-scientists to measure their night sky brightness and submit their observations to a website from a computer or smart phone.  People in 115 countries have contributed 66,000 measurements, making GLOBE at Night one of the most successful light pollution awareness campaigns. You can join too, and here is how! 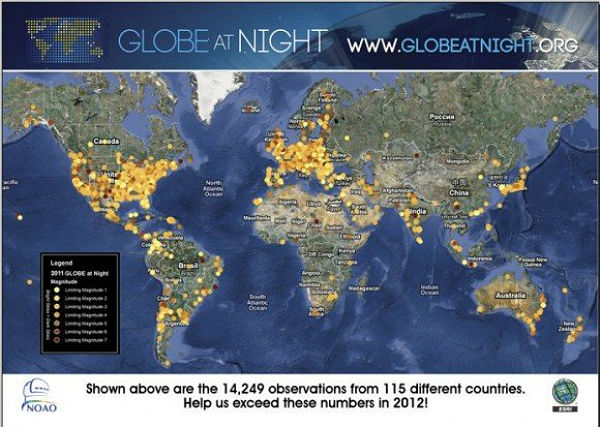 Participating in GLOBE at Night requires only five easy steps:

1) Find your latitude and longitude.

2) Find Orion, Leo or Crux by going outside more than an hour after sunset (about 8-10pm local time).

3) Match your nighttime sky to one of the provided magnitude charts.

5) Compare your observation to thousands around the world. 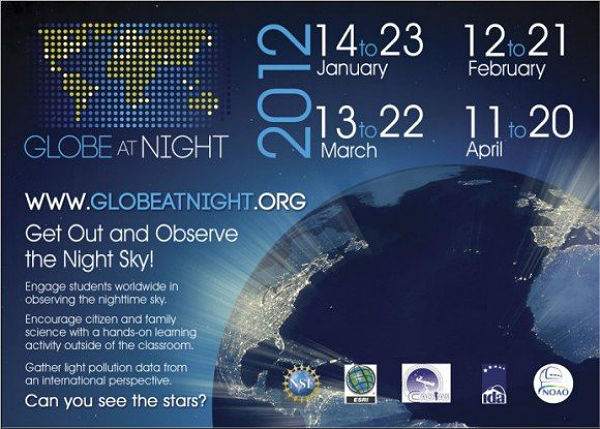 Magnitude is a term astronomers use to describe the brightness of an object. The magnitude scale for stars was invented by the ancient Greeks, possibly by Hipparchus around 150 B.C. The Greeks grouped the stars they could see into six brightness categories. The brightest stars were called magnitude 1 stars, while the dimmest were put in the magnitude 6 group. So, in the magnitude scale, lower numbers are associated with brighter stars.

Exceptionally bright objects, like the Sun, and very dim objects, such as faint stars that can only be seen with telescopes, have driven astronomers to extend the magnitude scale beyond the values of 1 through 6 used by the Greeks. We now recognize magnitudes less than one (including negative numbers) and greater than six. Sirius, the brightest star in our nighttime sky, has a magnitude of -1.4. The largest modern ground-based telescopes can spot stars as dim as magnitude 25 or higher. The human eye, without the aid of a telescope, can see stars as faint as 6th or 7th magnitude. 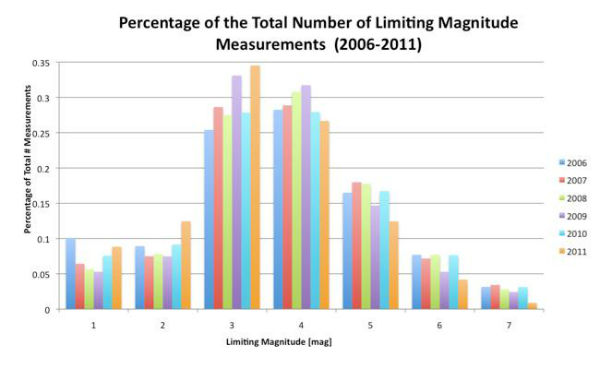 Analysis of the 6 years of GLOBE at Night showed that on average, the people who participated in GLOBE at Night saw brighter skies and less stars over time. The analysis was done by examining separately each of the limiting magnitudes (1 through 7) over all of the campaign years. Each of the limiting magnitudes corresponds to each chart (1 through 7) used in the campaign. The brighter the sky, the lower the number. A Chart 1 measurement (or Limiting Magnitude 1) would be what you would expect from New York City. A Chart 7 measurement (or Limiting Magnitude 7) is what you would expect from a national park.

Looking at the percentage of total number of measurements taken, binning those percentages in terms of the limiting magnitude (or chart number), and then color coding by year, produces the histogram in Figure 1. 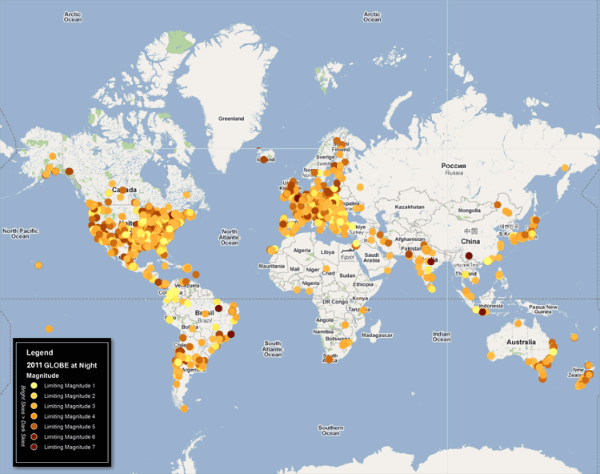 GLOBE at Night Results for 2011