Huge atmospheric rivers that wind their way through the skies have been linked to the 10 largest winter floods in the UK since the 1970s. A study of similar systems in California suggests that such floods could become more frequent and severe if greenhouse gas emissions accelerate.

An atmospheric river is a narrow corridor or filament of concentrated moisture in the atmosphere at least 2000 kilometres long and several hundred kilometres across, which move water across the mid-latitudes. They flow in the lower troposphere, where winds with speeds in excess of 12.5 metres per second can carry as much water as the Amazon river. Atmospheric rivers consist of narrow bands of enhanced water vapor transport, typically along the boundaries between large areas of divergent surface air flow, including some frontal zones in association with extratropical cyclones that form over the oceans.  At any given time, four or five ARs carry nearly 90 per cent of the moisture that is moving towards the poles. 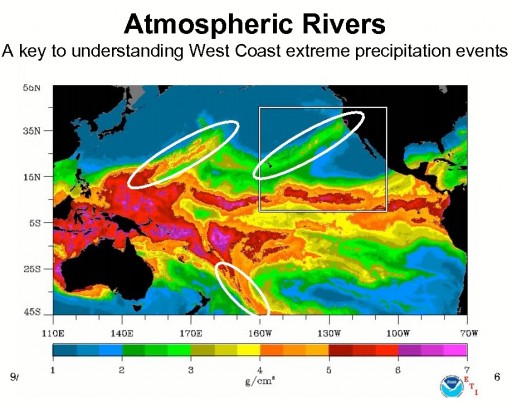 They also are the major cause of extreme precipitation events which cause severe flooding in many mid-latitude, westerly coastal regions of the world, including the West Coast of North America, western Europe, and the west coast of North Africa. A strong AR transports an amount of water vapor roughly equivalent to 7.5–15 times the average flow of liquid water at the mouth of the Mississippi River.

NOAA research (NOAA Hydrometeorological Testbed and CalWater) uses satellite, radar, aircraft and other observations, as well as major numerical weather model improvements, to better understand atmospheric rivers and their importance to both weather and climate.

Scientific research yields important data that helps NOAA National Weather Service forecasters issue warnings for potential heavy rain and flooding in areas prone to the impacts of atmospheric rivers as many as five to seven days in advance.

David Lavers of the University of Reading, UK, and colleagues combined historic river flow and weather data with computer simulations of ARs. They found a strong link between extreme floods and ARs that were flowing at the time. 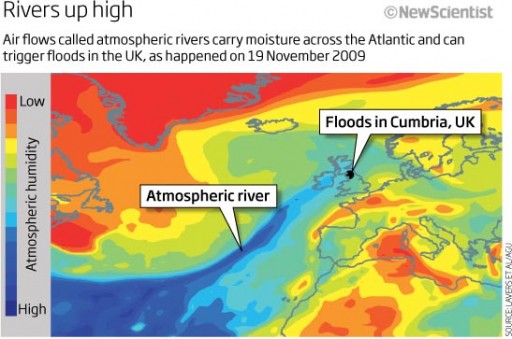 In November 2009, for example, the county of Cumbria received record rainfall that caused floods. This coincided with an extra-tropical cyclone which funnelled an AR towards the UK. Together with the Cumbrian mountains, the cyclone forced the AR to rise, cooling its moist load and forming rain. Unusually, the river dumped rain for several days, triggering the floods.

Michael Dettinger of the Scripps Institution of Oceanography in La Jolla, California, studied the “Pineapple Express”, an AR that brings water from the tropics near Hawaii to California. He used seven global circulation climate models to look at the changes in AR-induced storms if greenhouse gas emissions accelerate during the 21st century.

What he found was that more evaporation due to higher temperatures could cause AR-induced storms to become more frequent in California. There is no reason to expect any different in the UK. (NewScientist)