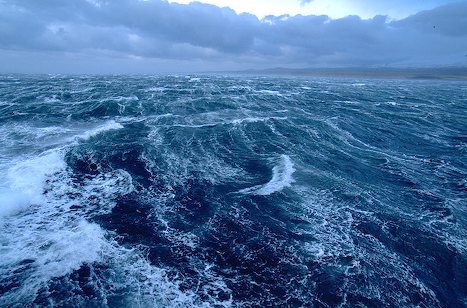 The historic Bering Sea storm everyone’s been talking about since Tuesday has begun to batter the coast of western Alaska, with the Bering Strait, Seward Peninsula, Norton Sound and Yukon Delta areas expected to take the brunt of it. Current forescasts expect the storm to continue through Wednesday and diminish by Thursday. 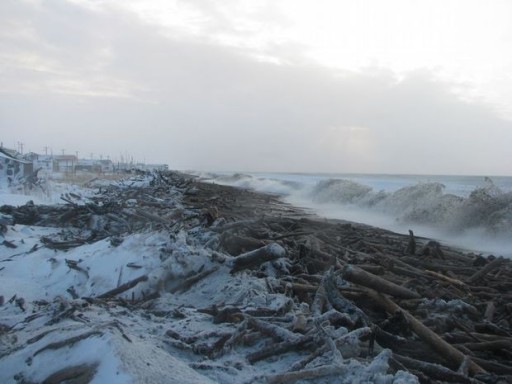 The NWS has analyzed the central surface pressure of the storm as of Wednesday night and found it at 944 millibars as it passed west of St. Lawrence Island. That pressure result is as low as a strong hurricane’s would be at lower latitudes.

The potentially historic ‘superstorm’… is making ‘landfall’ in Alaska today with a pressure equivalent to a Category 4 Hurricane reports  AccuWeather.com. 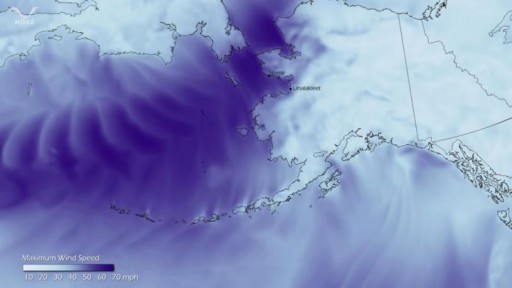 There were that widespread power outages hit for a while overnight in Noma area, some cars went in the ditch, and roofs have been at least partially blown off several houses and water at the base of a lot of houses. Blizzard conditions were in effect at Nome from the middle of Tuesday evening to early Wednesday morning, but now visibility is up to one mile. The power was out for at least several hours overnight, and estimated winds gusted to as high as 61 mph.

Water has been reported at the base of a lot of low-lying houses in Nome, is spreading over the sea wall, and high seas and waves pushed some water into town. High tide overnight Wednesday is expected to be about 7-1/2 feet, and tides are expected to rise about 7 feet higher than normal tonight, which will bring total water level to about 8 feet, AlaskaDispatch reports.

Communities affected by the storm since Tuesday: 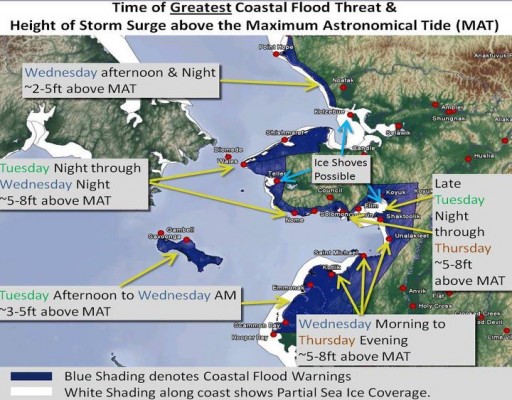 The Alaska Division of the Homeland Security and Emergency Management has posted a summary map on its Facebook page,with detailed information about flood danger, ice shoves, and expected flood surges across the threatened area. Here’s a satellite image / weather map from CIMSS.

Water is expected to rise about 2 more feet this evening in Nome, where water already has moved to the base of some buildings, National Weather Service forecasters told the Anchorage Daily News.

If you’re not an avid arctic-storm watcher, it’s hard to know where to turn for information about the storm’s progress. Here’s a quick guide to keeping up with the situation. 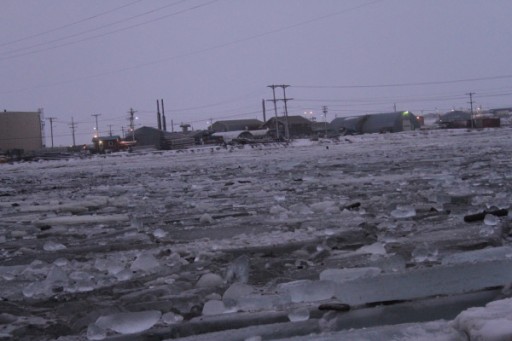