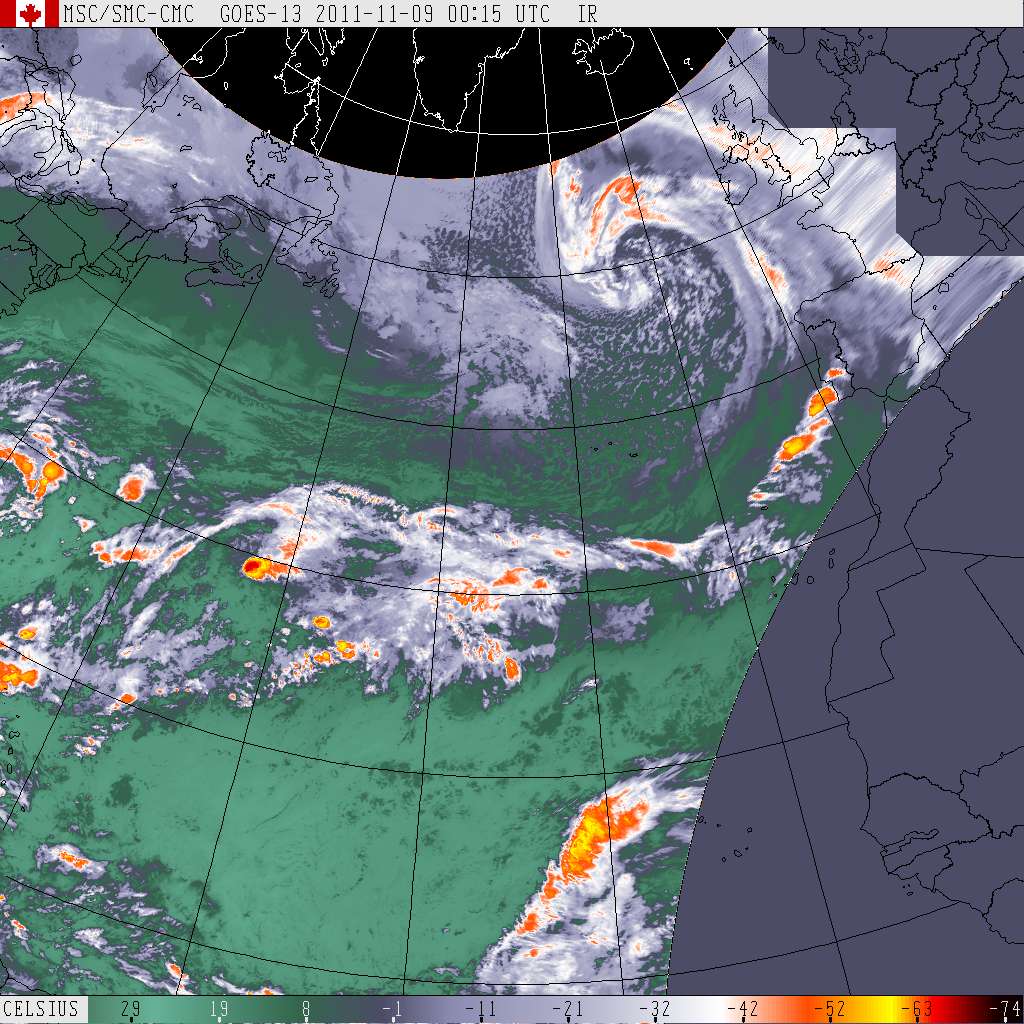 Referred to as the “Bering Sea Superstorm” by the National Weather Service Office in Fairbanks (NWS), damaging winds, severe beach erosion and major coastal flooding are expected. In some locations, heavy snow and blizzard conditions are also forecast. The storm is predicted to deepen at an incredible rate, with its central pressure crashing from 973 mb this morning to 945-950 mb tonight.

National Weather Service forecasters were predicting the area could be in for one of the most powerful storms ever to originate in the North Pacific. Coastal residents along the Bering and Chukchi seas were urged to "not delay in taking needed precautions for this unusually severe and potentially life-threatening storm. 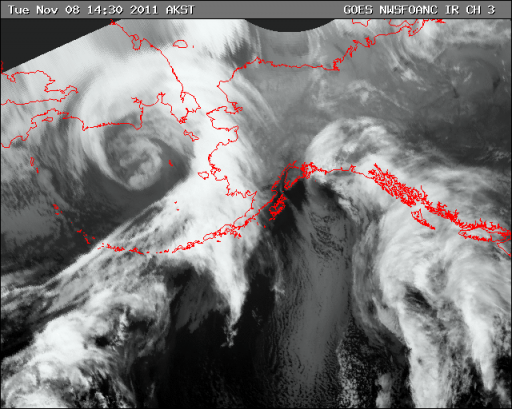 A storm surge of 8 to 10 feet is predicted along the coast. The combination of wind, waves, and high sea levels will create many hazards as described by the NWS in a Special Weather Statement:

A direct hit is forecast for Nome, Alaska where the conditions will resemble a snow hurricane. Sustained winds of 45-60 mph (with higher gusts) and 8-14 inches of snow are forecast along with a storm surge as high as 8 feet early Wednesday evening (local time) at the coast. The NWS likens the storm to the November 11-12, 1974 storm which is the strongest in that city’s 113 years of records. 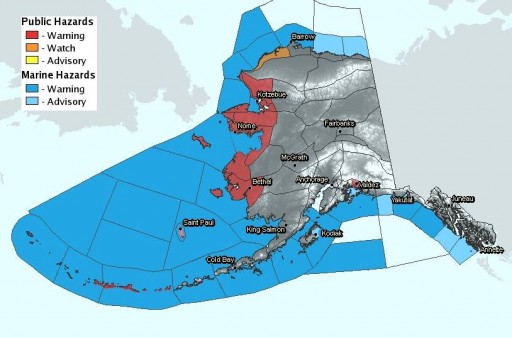 A RAPIDLY DEVELOPING STORM LOCATED ABOUT 600 MILES SOUTHWEST OF SHEMYA THIS AFTERNOON WILL INTENSIFY INTO ONE OF THE MOST SEVERE BERING SEA STORMS ON RECORD AS IT MOVES NORTHWARD ACROSS THE CHUKOTSK PENINSULA TUESDAY NIGHT. THIS STORM HAS THE POTENTIAL TO PRODUCE WIDESPREAD DAMAGE.

WINDS ARE EXPECTED TO APPROACH HURRICANE FORCE OVER THE CHUKCHI SEA AND NORTHERN BERING SEA. THE STRONG WINDS WILL GENERATE SEAS TO AS HIGH AS 20 FEET OVER THE CHUKCHI SEA…AND TO 15 TO 25 FEET OVER THE NORTHERN BERING SEA. THE STRONG WINDS WILL PUSH LARGE AMOUNTS OF WATER INTO NORTON SOUND…RAISING SEA LEVELS TO AS HIGH AS 8 TO 9 FEET ABOVE NORMAL TUESDAY NIGHT THROUGH WEDNESDAY NIGHT.

AGAIN…THIS IS AN EXTREMELY DANGEROUS AND LIFE THREATENING STORM WHICH WILL BE ONE OF THE WORST ON RECORD OVER THE BERING SEA AND THE WEST COAST. 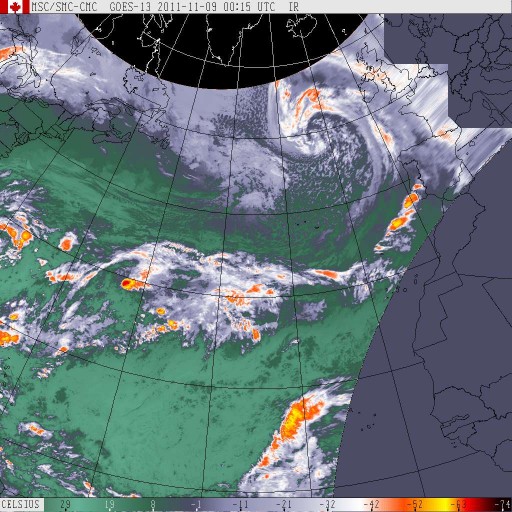 Smaller coastal towns were also threatened, including Kivalina, whose 400 residents live on a spit of land jutting into the Chukchi Sea. Reduced sea ice levels there in recent years have meant more shoreline erosion from storms. The Inupiat Eskimo village of about 700 people has no sea wall and no evacuation road.

Weather service map of the region

The remote Pribilof Islands are among the possible targets for a brewing Arctic hurricane. The weather service warned that seas that batter the islands were likely to build to 32 feet higher than many three-story buildings. The people of the Pribilofs were getting ready as best they could reports AlaskaDispatch.

The harsh weather is expected to last through Wednesday. Conditions could improve Thursday.

According to AccuWeather, the part of a storm blasting the Bering Sea into Friday may slam the Northwest with gusty winds, heavy rain and mountain whiteouts in time for the weekend. The Bering Sea storm will break up into several pieces late in the week. One of the larger pieces of that storm will turn southeastward toward British Columbia Saturday. While it is early to speculate a great deal, it could become another snowstorm for the central Rockies and the Denver area around this time next week as this storm merges with another storm aiming for Southern California late this week with rain.