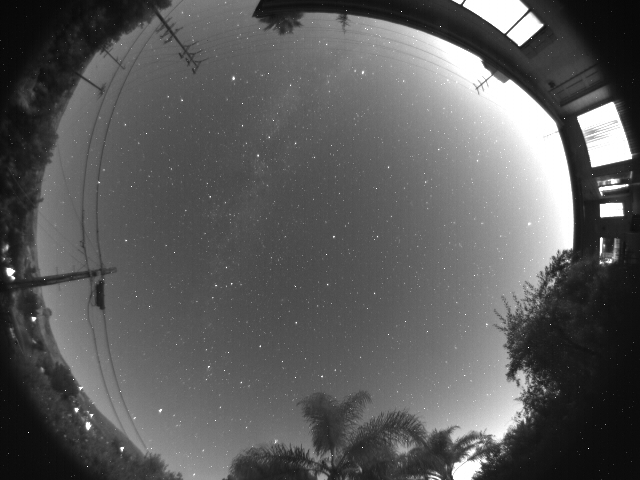 All-sky camera (ASC) often records strange flashes. What could it be?

“They are not iridium flares because they are stationary,” said James Beauchamp, an amateur astronomer who hosts the meteor camera for Sandia National Labs and New Mexico State University, and who posted this video on You Tube. “And they are not geosynchronous satellites because the azimuth/elevation are too far North. They are reflective because they always happen just prior to or after sunrise/sunset. Whatever it is, it’s slow and BIG.”

Beauchamp says he see a flash like this about once every month or so. Some are really bright like this one, and others are just small blinks.  He’s guessing it is a satellite with a big, reflective panel that appears at the right place and time for a direct reflection from the sun to the camera. And the five points that are visible could be the object with the four corners overlaid.

But the cool, mysterious part here, said Beauchamp, is that no one can figure out exactly which satellite it is. It likely is a “secret” spy satellite that the coordinates and overhead pass times aren’t listed on places like Heavens Above or CalSky.

Beauchamp has come up with a few ‘Sherlock Holmes’ facts that narrows down a few things:

1. Unlike most flares, it is stationary when it flashes, which means a high earth orbit, or elliptical one. Most satellites are in low Earth orbit, which means they are moving fast, and this is not one of them, so it is not a GPS, Iridium, or research satellite.

2. The flashes always occur within a couple of hours of sunrise/sunset – which means they are in direct sunlight. So it’s not some strange atmospheric thing.

3. The elevation over the Earth is too far North to be a satellite in geosynchronous orbit. This particular flash in the video above was about +30 degrees.

4. Cross-check with freeware such as Orbitron and NORAD TLE’s show no satellites around that would make such a flare – e.g. they are all LEO or not in the line of sight and general direction.

But he considers it a fun mystery to try and solve. Can you help?(UniverseToday)