Two sailors died when their 35-foot sailboat capsized in a storm, while six crew members were pulled from Lake Michigan by another boat competing in the annual Race to Mackinac, the Coast Guard said on Monday. Themidnight storm generated four- to six-foot waves andWingNuts, a boat registered out of Saginaw, Michigan, capsized and issued a distress signal. The crew from the boat “Sociable” radioed authorities and pulled six people from the temperate lake waters, Coast Guard Petty Officer Lauren Jorgensen said. Two Coast Guard vessels and a helicopter found WingNuts overturned 13 miles northwest of Charlevoix, Michigan, and the bodies of the two sailors were discovered close by. The victims were WingNuts captain Mark Morley, 51, and Suzanne Bickel, 41, both of Saginaw, race organizers said. Morley had 44 years of sailing experience, including six Mackinac races. Several other boats had abandoned the race to help in the search, race organizers said. Several boats retired and others were “limping home” following the violent storm that produced torrential rains, high winds, and sheet lightning. 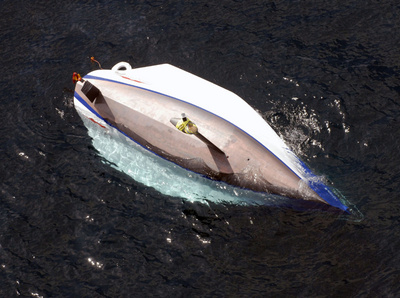 Lake Michigan generates some of the steepest waves of any body of water anywhere, because of its geography and depth, according to sailing experts. (Reuters)

549 cities under state of emergency due to severe floods, Brazil

More than 549 cities in Brazil are now under a state of emergency due to severe floods affecting the country over the past couple of weeks. Dozens of people have been killed and more than 133 000 forced to evacuate their homes. In addition, 200 cities in the state...

The City and Borough of Yakutat in Alaska, U.S. has declared a local disaster emergency on January 11, 2022, after accumulating approximately 1.5 - 1.8 m (5 - 6 feet) of snow over the last several weeks. Yakutat is isolated and off the road system, and all local...

China is stockpiling food at historically high levels and now has more than half of the world's maize and other grains. By mid-2022, the country is estimated to hold 69% of the world’s corn reserves, 60% of rice, and 51% of wheat. At the end of 2021,...

A strong, quick-hitting winter storm is expected to bring heavy snow and gusty winds to the Northern Plains into the Upper and Mid-Mississippi Valley, U.S. that may cause some hazardous travel beginning Thursday night, January 13, 2022, through Friday night. The...

Sequence of tectonic earthquakes under the summit of Ruapehu volcano, New Zealand

Tectonic earthquakes are being registered beneath the summit area of Ruapehu volcano in New Zealand since December 30, 2021. While these earthquakes are uncommon, none of the monitoring data suggests that the volcano is exhibiting increased levels of activity....