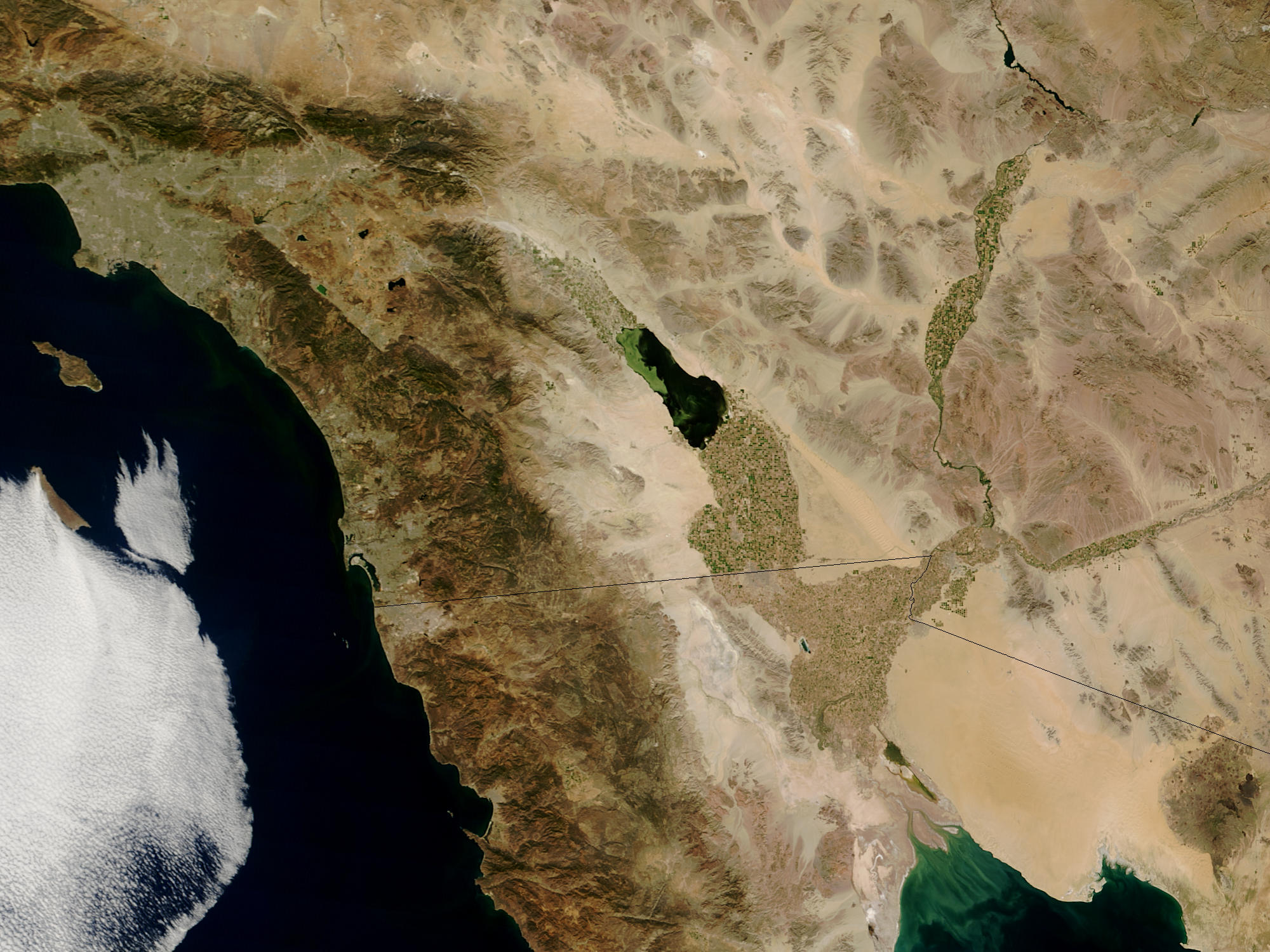 Study finds that faults beneath the Salton Sea ruptured during Colorado River floods and may have triggered large earthquakes on the southern San Andreas Fault. 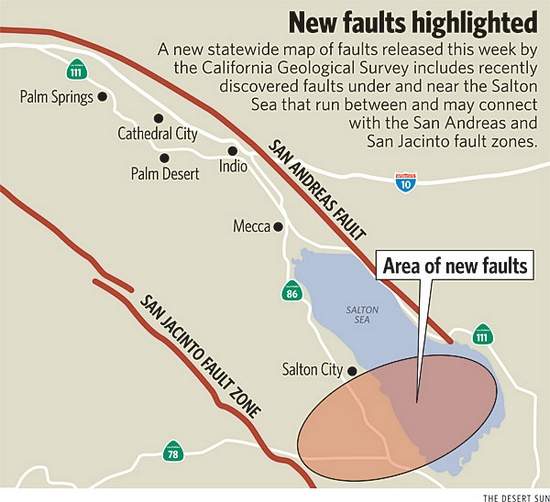 It all comes down to the Salton Sea, which lies to the east of San Diego. The Salton Sea lies directly on the San Andreas Fault and covers more than 350 square miles.  A big earthquake has hit the lake bed about every 180 years. But when officials started damming the Colorado River to reduce floods downstream (including in the Salton Sea), the moderate earthquakes stopped for the Salton. But seismologists think the damming stopped moderate stress-relieving earthquakes on the Salton. Now, they fear the pressure is building and the area could be as many as 100 years overdue for a mega-quake, measuring 7.5 or larger. (Weather.com)

This sobering news comes just as a new poll is released that details Californians fears about earthquakes and other natural disasters.

The findings were published in the scientific journal “Nature Geoscience.”

Southern California’s Salton Sea, once a large natural lake fed by the Colorado River, may play an important role in the earthquake cycle of the southern San Andreas Fault and may have triggered large earthquakes in the past.

Researchers at Scripps Institution of Oceanography, UC San Diego, the U.S. Geological Survey (USGS) and the University of Nevada, Reno, discovered new faults in the Salton Sea near the southern end of the San Andreas Fault. By examining displacement indicators preserved in pristine sedimentary deposits, the team reconstructed their earthquake history and found evidence for coincident timing between flooding of the ancient Salton Sea and fault rupture. Rupture on these newly discovered “stepover” faults has the potential to trigger large earthquakes on the southern San Andreas Fault.

The report appears in the online version of the journal Nature Geoscience on June 26. 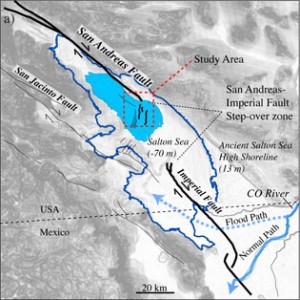 The Salton Sea covers a structural boundary at the southern end of the San Andreas Fault where it takes a southwestward step to the Imperial Fault. The region is closely monitored because the last large earthquake on this section of the San Andreas occurred approximately 300 years ago and the fault is considered by many experts to be overdue for another.

By imaging beneath the Salton Sea, the study identified the key role of stepover faults that run at an angle to the San Andreas Fault. The smaller faults rupture relatively frequently and, at times, they ruptured in concert with Colorado River flooding of the Salton Trough. The current dimensions of the Salton Sea located in California’s Imperial Valley are but a fraction of the natural lake that preceded it.

Through cycles of flooding and evaporation, the historical Lake Cahuilla was once one and a half times the size of Lake Tahoe at its maximum. What is left since the beginning of the 20th Century – when local authorities redirected the Colorado River away from the lake – is less than 1/25th that size.

When its natural dimensions were in place, Lake Cahuilla and its surrounding region experienced in a 1,000-year period five earthquakes on the Southern San Andreas that are believed to have been larger than magnitude 7. The temblors occurred about 180 years apart. It’s been more than 300 years since the last one. Diversion of the Colorado River and the lack of flooding events in the local basin known as the Salton Trough may be one possible explanation. 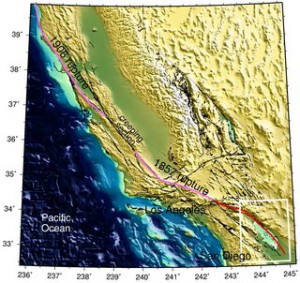 The researchers studied the sediments deposited over several millennia on the lake floor and found coincident timing between several flooding events and rupture of step-over faults, which in turn, may have loaded the San Andreas. Stress models showed that the predominantly normal faults with vertical displacement in the Salton Sea are more vulnerable to sudden increases in vertical loads caused by lake filling. Those failures may have triggered the movement of California’s primary fault in several instances, the researchers said. No such sequence has taken place since the lake assumed its current dimensions.

“We’ve been baffled as to why the Southern San Andreas hasn’t gone. It’s been compared to a woman who is 15 months pregnant,” said Scripps seismologist Debi Kilb, a report co-author. “Now this paper offers one explanation why.”

The researchers cautioned that failure of the stepover faults is ultimately driven by tectonic forces and could still set off a major rupture of the San Andreas Fault independently of any lake level fluctuations. Other research teams have estimated that stress buildup in the area is still great enough to produce a quake between magnitude 7 and 8. The idea that the San Andreas is triggered by stress loading in the Salton Sea supports the assumption by many scientists that a future quake sequence could propagate northward and potentially cause significant damage in the Los Angeles area. 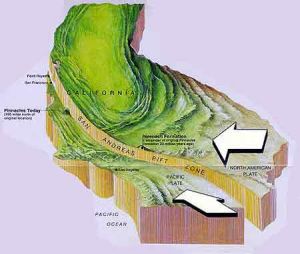 “Earthquake simulations reveal that shaking of large metropolitan areas such as Riverside and Los Angeles will be larger if the earthquake propagates from south to north – our research suggests that the Salton Sea stepover zone may provide a trigger for such a propagation direction,” said Scripps geologist Neal Driscoll, a report co-author.

Brothers said that one of the most immediate applications of the research is as a guide to development in the Salton Sea region, which has been the subject of environmental restoration efforts in recent years.

“Large earthquakes on the southern San Andreas most likely will be accompanied by liquefaction in the Imperial Valley. In addition to ground shaking, the liquefaction will cause damage to water conveyance systems and existing infrastructure in the region and is likely to affect Salton Sea restoration efforts,” he said.

“Not only were we able to address seismic hazards issues along the San Andreas Fault, but this research also highlights the broader use and capabilities of new techniques and technologies to study hazards under bodies of water,” added Graham Kent, director of the Nevada Seismological Laboratory at the University of Nevada, Reno and a co-author of the report. “This can have application for other regions where the presence of water has left problems undetected.” (ScrippsNews)