A new earthquake swarm started beneath the Salton Sea in California on August 10, 2020. The risk of a larger earthquake over the next 7 days is considerably elevated due to the swarm when compared to background levels. The southernmost section of the San Andreas Fault is capable of rupturing in large magnitude earthquakes (M7+), the last of which occurred more than 300 years ago, USGS said.

The San Andreas Fault is considered as one of the most dangerous faults in the world. It stretches around 1 200 km (750 miles) and marks the boundary between the Pacific and North American tectonic plates. There are three major cities on the fault– Los Angeles, San Francisco, and San Diego, along with other towns.

The USGS has been monitoring an ongoing earthquake activity beneath the Salton Sea near the fault, with the largest quake recorded on August 10 as M4.6. 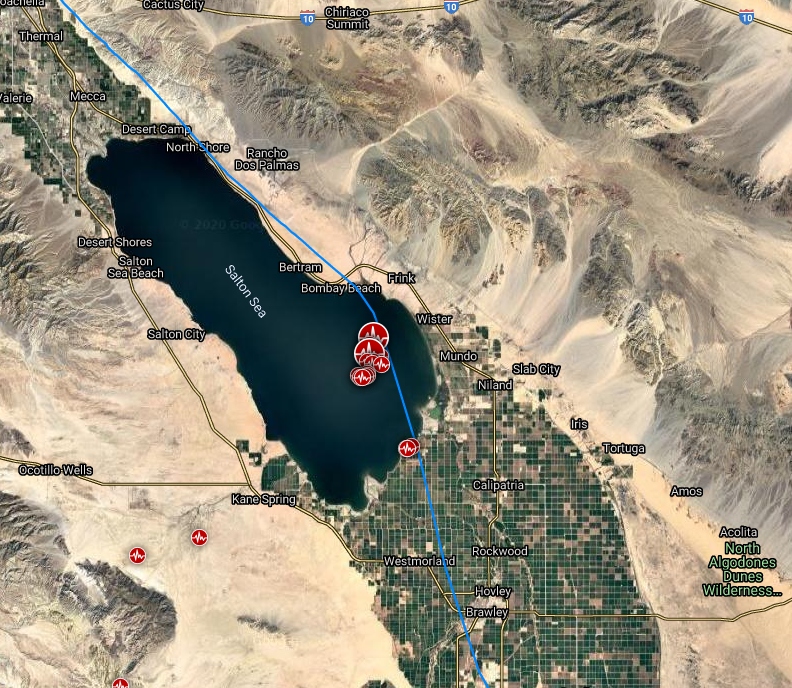 This portion of San Andreas is capable of generating tremors of M7.0 and above. The last time an earthquake of this size hit the area was over 300 years ago.

"Historically, this area has seen swarms before– most recently in 2001, 2009, and 2016.  During the last swarm in 2016, there were three bursts of activity separated by relatively quiet periods before the swarm ended," USGS wrote.

"Past swarms in this area have remained active for 1 to 20 days, with a typical duration of about a week, so this swarm may have future bursts of activity that will in turn impact the probabilities discussed below."

The agency warned that there are three possible scenarios of what could happen from August 12 to August 19.

The first scenario has a 98 percent chance of happening: earthquakes continue but will not be greater than M5.4 within the next week. The most likely scenario is that the rate of quakes in the swarm will decrease over the coming week.

Some moderately sized earthquakes may happen, within the range of M4.5 to M5.4. This may cause localized damage, especially in weak structures. Smaller earthquakes around M3.0 may be felt by people near the epicenters.

The second scenario has about a 2 percent chance of occurring: a larger earthquake could occur, ranging from M5.5 to 6.9. Earthquakes of this size may inflict damage around the Salton Sea area and may be followed by aftershocks that would increase the number of smaller quakes each day.

Scenario Three has less than 1 percent chance of taking place: a much bigger earthquake with M7.0 or higher could occur within the next seven days.

While the scenario has a very small probability, it would have major impacts on nearby communities if such a quake were to happen. It would be followed by aftershocks that would also increase the number of smaller shakes per day.

"No one can predict the exact time or place of any earthquake, including aftershocks or events in swarms. Our earthquake forecasts give us an understanding of the chances of having more earthquakes within a given time period in the affected area. We calculate this earthquake forecast using statistical analysis based on past earthquakes," said USGS.

"We are carefully monitoring activity throughout the region and will continue to provide information to help people stay safe and care for themselves and each other."