Scientists at the University of South California (USC) have detected that the earthquakes registered alongside California’s San Andreas Fault occur much deeper than previously understood. The previous knowledge of the fault indicated that earthquakes are registered in the first 16 km (10 miles) of the crust, but a new study shows that some tremors on the San Andreas Fault take place much deeper.

The infamous San Andreas Fault is causing distress to the inhabitants of the adjacent cities, particularly Parkfield, due to often and strong earthquakes.

From 1857 to 2004, Parkfield has been struck by several earthquakes magnitude 6.0 and more, according to the U.S. Geological Survey.

This has made the Parkfield the central point of investigation of the San Andreas Fault, as the fault slices past the town.

For now, the scientists have been centered on the first 10 miles of the crust, but a new study shows that minor tremors are detected much deeper, says the Assistant professor of Earth sciences at the USC Dornsife College of Letters, Arts and Sciences, Sylvain Barbot. 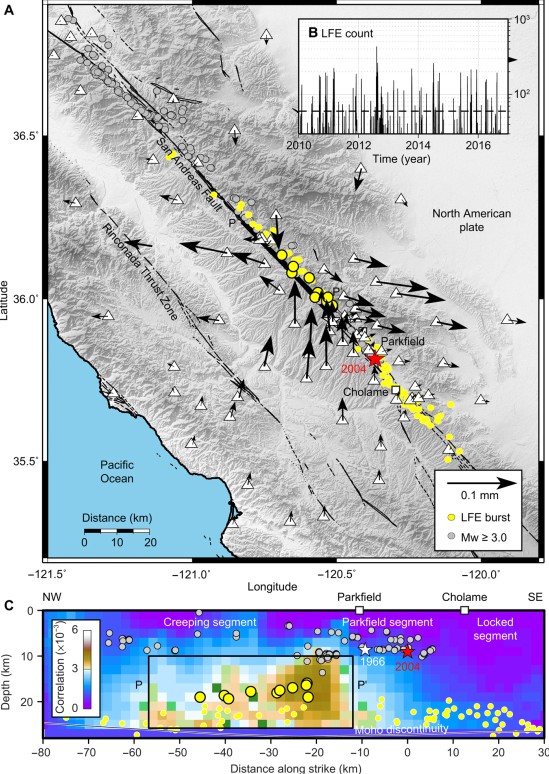 Fig. 1. Deep LFEs and slow slip along the San Andreas fault. (A) LFE (yellow circles) and Mw ≥ 3 seismicity from the Northern California Earthquake Data Center (NCEDC) catalog (gray circles) for the period 2004–2017. The 10 LFE families above 20 km depth are marked with a black contour. The Mw 6.0 Parkfield earthquakes of 1966 and 2004 are marked by the white and red stars, respectively. The displacements (black vectors) at GPS sites (white triangles) are due to a simulated large slow-slip event of Mw 4.72, whose slip distribution is shown in

Figure 3B. (B) Temporal behavior of the shallowest 10 LFE families northwest of Parkfield. (C) Vertical cross section along the San Andreas fault. The background color, associated with a correlation coefficient, indicates the likely location of a slow-slip event driving the shallowest LFE. Credit: The Authors, AAAS

So, what is causing it, and how to explain these new findings?

Well, scientists have conducted a number of simulations using mathematical models and laboratory experiments with rocks. Based on the evidence collected alongside the section of the San Andreas Fault, and beneath Parkfield to 26 km (16 miles).

They simulated the dynamics of fault activity in the deep Earth spanning 300 years to study a wide range of rupture sizes and behaviors.

The great earthquakes cause the tectonic plates to settle into a go-along, get-along phase, but as this lasts for a time, the plates glide past each other, they start to generate heat due to the constant friction. This then leads to a change of state of the rock blocks as they become more fluid-like, which increases friction and heat, making them pass each other at a faster speed, which in other words is the new earthquake.

The study shows that the deep section of the San Andreas Fault breaks frequently and melts the host rocks. Barbot is the corresponding author of the new study, alongside Lifeng Wang, who is the researcher at the China Earthquake Administration in China.

Sylvain Barbot has explained that the movements of the San Andreas Fault can be caused by large changes in temperature. With the newest study, the scientist is trying to explain all of the different types of motion seen in the ground and not just trying to predict the new earthquakes.

The newest findings can only improve and generate an advantage on the long-term goal of understanding how and where earthquakes are likely to occur. Furthermore, new information is meaningful in making new building codes and emergency preparedness in quake-ridden areas, such is California.

The relative motion of tectonic plates is accommodated at boundary faults through slow and fast ruptures that encompass a wide range of source properties. Near the Parkfield segment of the San Andreas fault, low-frequency earthquakes and slow-slip events take place deeper than most seismicity, at temperature conditions typically associated with stable sliding. However, laboratory experiments indicate that the strength of granitic gouge decreases with increasing temperature above 350°C, providing a possible mechanism for weakening if temperature is to vary dynamically. Here, we argue that recurring low-frequency earthquakes and slow-slip transients at these depths may arise because of shear heating and the temperature dependence of frictional resistance. Recurring thermal instabilities can explain the recurrence pattern of the mid-crustal low-frequency earthquakes and their correlative slip distribution. Shear heating associated with slow slip is sufficient to generate pseudotachylyte veins in host rocks even when fault slip is dominantly aseismic.