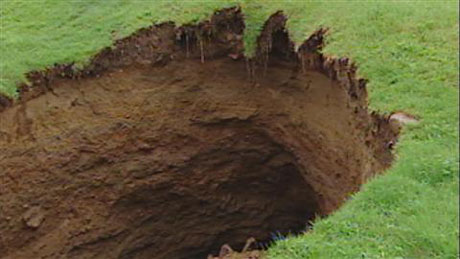 Engineers and geologists are examining dozens of deep holes that appeared in the ground in Quebec City’s north end this week, as residents are being urged to leave their homes for safer locations.

City officials served evacuation papers Wednesday to about 15 homes and one business in Quebec City’s Charlesbourg district, where nearly 40 holes have been reported. The holes, ranging between five and eight metres wide, have appeared this week in various fields, and on one residential driveway.

The deepest hole is about five metres deep. Some of the holes have closed, but the remaining gaps are mystifying officials.

Some of the affected fields used to be sandpits, but experts are running tests with surface radar instruments to analyze the soil. Evacuation is optional, but strongly recommended. At least 40 residents have heeded the optional evacuation recommendation. Other residents who chose to leave their homes are using Red Cross emergency services. (CBC)