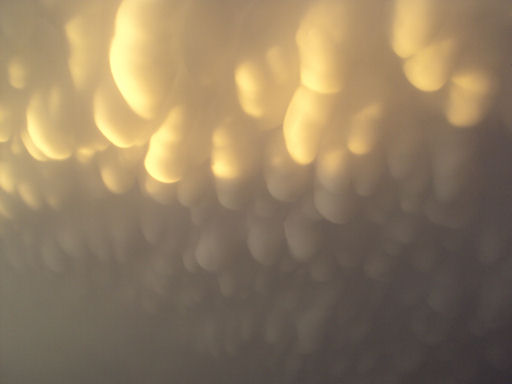 On May 10th, a severe storm captured national attention when it dumped golf-ball-sized hail on a Minnesota Twins baseball game.

"I missed the hail," reports John Rogers of New Hope, Minnesota, "but I got a nice view of the clouds that formed after the storm passed." He snapped this picture in waning twilight at 8:30 pm local time:

These are mammatus clouds. Named for their resemblance to a cow's underbelly, they sometimes appear at the end of severe thunderstorms when the thundercloud is breaking up. Researchers have called them an "intriguing enigma," because no one knows exactly how and why they form. The clouds are fairly common but often go unnoticed because potential observers have been chased indoors by the rain. If you are one of them, dash outside when the downpour stops; you could witness a beautiful mystery in the sky. (SpaceWeather) 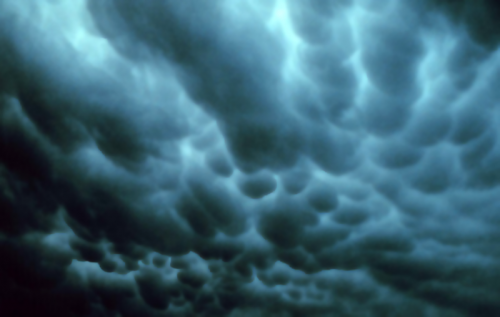 Mammatus, also known as mammatocumulus (meaning "mammary cloud" or "breast cloud"), is a meteorological term applied to a cellular pattern of pouches hanging underneath the base of a cloud. The name mammatus, derived from the Latin mamma (meaning "udder" or "breast"), refers to a resemblance between the characteristic shape of these clouds and the breast of a woman.

Mammatus are most often associated with the anvil cloud and also severe thunderstorms. They often extend from the base of a cumulonimbus, but may also be found under altocumulus, altostratus, stratocumulus, and cirrus clouds, as well as volcanic ash clouds. In the United States, sky gazers may be most familiar with the very distinct and more common cumulonimbus mammatus. When occurring in cumulonimbus, mammatus are often indicative of a particularly strong storm or maybe even a tornadic storm. Due to the intensely sheared environment in which mammatus form, aviators are strongly cautioned to avoid cumulonimbus with mammatus.

Mammatus may appear as smooth, ragged or lumpy lobes and may be opaque or semitransparent. Because mammatus occur as a grouping of lobes, the way they clump together can vary from an isolated cluster to a field of mamma that spread over hundreds of kilometers to being organized along a line, and may be composed of unequal or similarly-sized lobes. The individual mammatus lobe average diameters of 1–3 km and lengths on average of 0.5 km. A lobe can last an average of 10 minutes, but a whole cluster of mamma can range from 15 minutes to a few hours. They usually are composed of ice, but also can be a mixture of ice and liquid water or be composed of almost entirely liquid water. (Wikipedia) 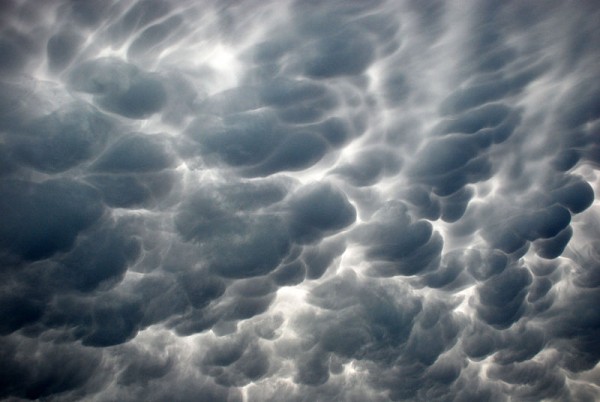