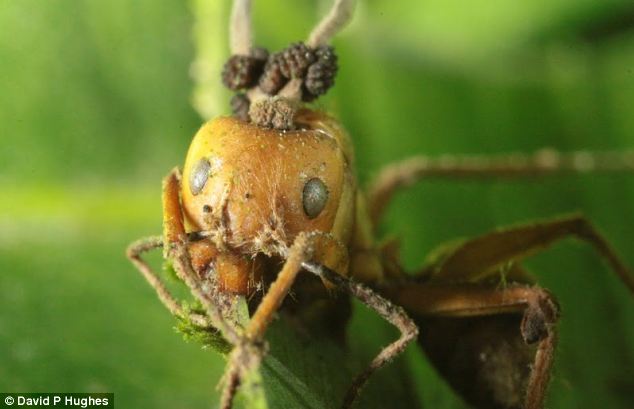 Parasites are destroying colonies of ants in the Amazonian rainforest. The fungus latches on to carpenter ants as they cross the forest floor before returning to their nests high in the canopy. The fungus then grows inside the ants, taking over their bodies and releasing chemicals to alter their behaviour. The fungus slowly turns host creatures into zombies before killing them off. Some of the insects wander off to find fresh leaves, while others fall from the tree tops on to leaves nearer the ground. It is all part of the mechanism used by the fungus to ensure its spores are spread as far and wide as possible.

The final stage of the parasitic death sentence is particularly grim. The fungus will ‘guide’ the infected ant to a leaf and lock their mandibles in a ‘death grip’ around the central vein, immobilising themselves and locking the fungus in position. Once an ant has died, the fungus sprouts from its head and produces a pod of spores, which are dropped at night on to the forest floor. The fungus cannot grow high up in the canopy or on the forest floor, but infected ants often die on leaves midway between the two, where the humidity and temperature suit the fungus. 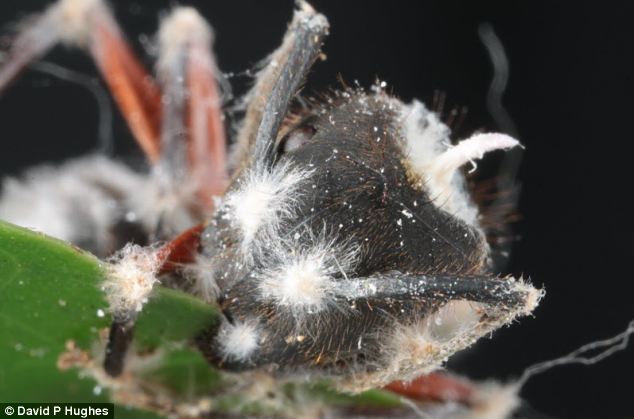 On a recent trip to the rainforest four new species in the genus Ophiocordyceps were found by David Hughes, from Penn State University, and Harry Evans, from the Centre for Agriculture and Biosciences International in Surrey. Their results have been published in the online journal PLoS ONE.
Scientists are not clear how the fungus controls the ants, but know that it releases alkaloid chemicals into the insect as it consumes it from the inside. The four new species all come from the rainforest in south-eastern Brazil, which is the most heavily degraded biodiversity hotspot on the planet. Ninety-two percent of its original coverage is gone. According to the scientists each of the species is highly specialised on one ant species and has a suite of adaptations and spore types to ensure infection.The life-cycle of these fungi that infect, manipulate and kill ants before growing spore producing stalks from their heads is remarkably complicated.
The present work establishes the identification tools to move forward and ask how forest fragmentation affects such disease dynamics.

Last summer the oldest evidence of such parasites was found on the leaves of plants that grew in Messel, Germany, 48million years ago. The scientists have also found six species of the fungus in the rainforests surrounding Cairns, Australia. (Daily Mail)