The U.S. Navy's Joint Typhoon Warning Center (JTWC) reported that, as of about noon Madagascar time on Feb. 14, Bingiza had maximum sustained winds of 98 mph (155 kilometers per hour) and gusts up to 120 mph (195 kph). 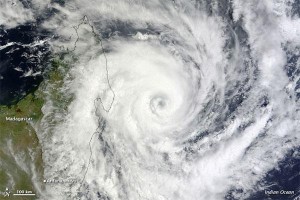 Although Bingiza would weaken somewhat over land, the storm was expected to re-strengthen after passing over northern Madagascar, thanks to high sea surface temperatures, according to a NASA statement. The JTWC forecast that, on the western side of Madagascar, the storm would travel southward, roughly tracing the island’s west coast.