A significant winter storm will bring snow and ice from the southern Plains to the Ohio Valley through Thursday night, February 24, 2022, with heavy snow for the Northeast U.S. Thursday night through Friday. Freezing rain and sleet ongoing from north Texas through the Mid-Mississippi Valley will shift to the eastern Ohio Valley through the central Appalachians. Dangerous travel and power outages are possible.

By Thursday afternoon, a storm over the South Rockies will move eastward to western Texas. Then the storm will redevelop over the Tennessee Valley, move northeastward to the Ohio Valley/Central Appalachians/Mid-Atlantic by Friday, February 25 and off the Mid-Atlantic Coast by Friday evening, NWS forecaster Ziegenfelder noted.1

On Thursday morning, the upper-level system will produce snow over the Southwest/Great Basin and Central Rockies. The snow will end over the area by the late afternoon.

Damaging ice accumulations across the Ozarks up to 13 mm (0.50 inches) leading to power outages and tree damage are possible.

This ice is within a swath of notable accumulations of rain/freezing rain and sleet expected from North Texas through the Mid-Mississippi Valley. 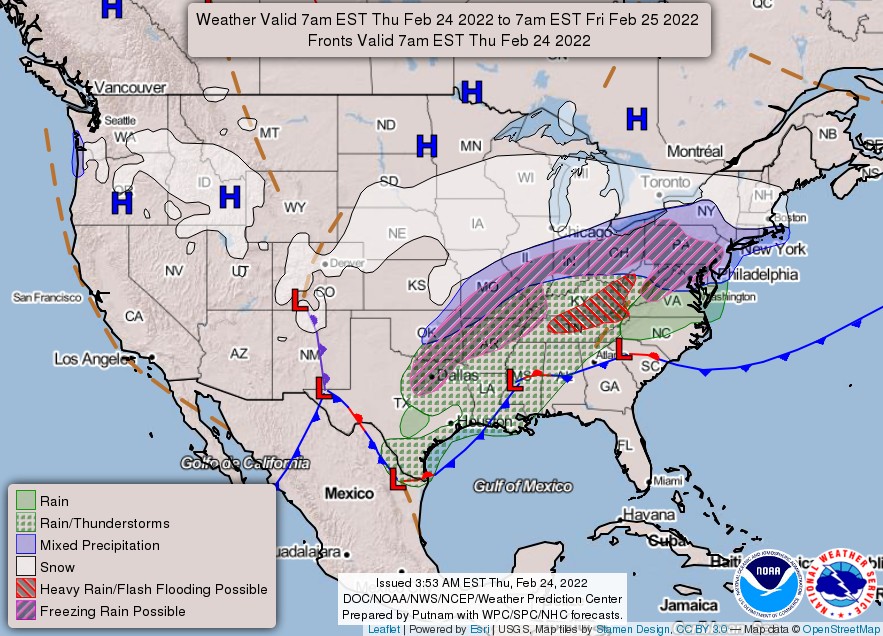 Overnight Thursday, the heavy snow will develop over parts of the Middle Mississippi Valley into the Great Lakes, moving into the Northeast early Friday morning.

As the system proceeds to the Central Appalachians/Mid-Atlantic on Friday morning, heavy snow will develop over parts of the Northeast into Southern New England. Widespread amounts greater than 15 cm (6 inches) of snow are likely.

Another rain/freezing rain area is expected from the Eastern Ohio Valley through the Central Appalachians. Significant ice accumulations are possible across south-central Pennsylvania and western Maryland.

"Prepare now for this major winter storm. Widespread hazardous travel and damage to the power infrastructure are expected," Ziegenfelder said.