Heavy snow and powerful winds in the Great Basin mountains, Rockies, and into the High Plains will create hazardous travel conditions, NWS warned on October 12, 2021. Severe storms developing in the Plains ahead of this front may have damaging winds, large hail, and a couple of tornadoes.

An early-season heavy snow event is in progress across the northern and central Rockies on Tuesday, October 12, as a large area of low pressure continues to develop just to the south, NWS forecasters Kong and Oravec noted.1

Snow is expanding in coverage across these areas and is expected to become heavier as the day progresses.

The low pressure system is forecast to intensify further through tonight as it tracks northeastward across central High Plains towards the northern Plains.

The snow is expected to be quite heavy to the west of the storm track over the northern High Plains tonight.

Winter Storm Watches and Warnings are currently in effect where snowfall totals of 30 – 60 cm (1 to 2 feet) are possible.

In addition, the heavy snow will be accompanied with very strong and gusty north to northwesterly winds during the height of the storm.

This will likely result in blowing and drifting of the snow as the storm continues to intensify.

By Wednesday, the heavy snow and high winds will likely spread further north into the western Dakotas and eastern Montana. 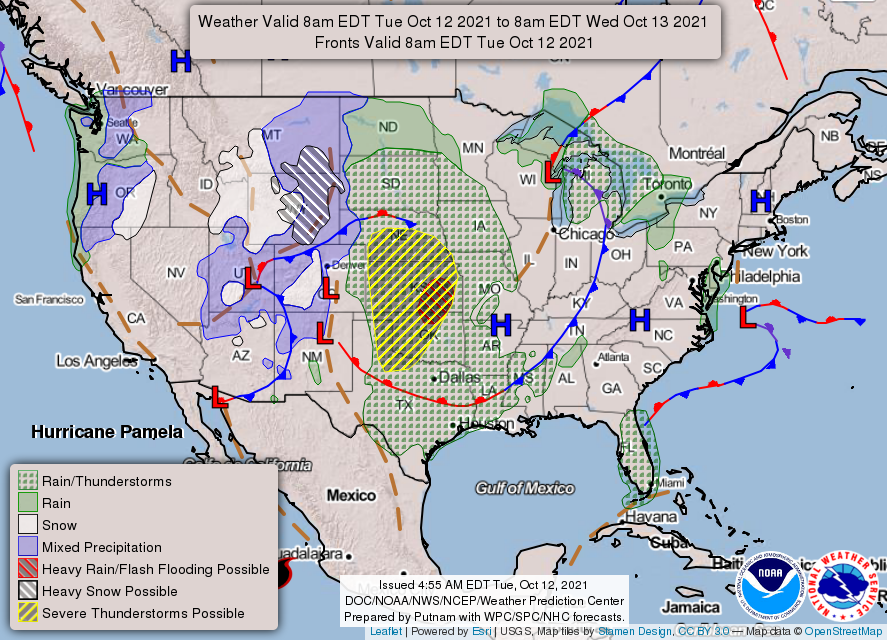 This same system will also support increasing thunderstorm activity tonight into Wednesday across large portions of the Plains ahead of a strong cold front pushing eastward across these areas.

Additional heavy rains and the risk of Flash Flooding will push back into portions of the southern Plains Wednesday night into Thursday as moisture associated with currently Hurricane "Pamela" off the west coast of Mexico is transported northeastward into the above-mentioned frontal zone which is forecast to become stationary over the southern Plains at this time.

While Pamela will likely weaken rapidly when it moves inland into western Mexico Wednesday, its associated moisture will have a longer-lived impact as it is transported northeast into the frontal zone across the southern Plains Wednesday night into Thursday, supporting the heavy rain and flash flooding potential.

This active pattern, producing weather conditions of both winter and summer, will also result in large temperature contrast across the nation over the next few days.