Seismic activity under Cumbre Vieja, La Palma, Canary Islands continues to migrate slightly to the northwest, at depths of around 8 km (5 miles), with 20 shallow earthquakes at depths between 1 and 3 km (0.6 – 1.8 miles). The maximum accumulated deformation reached about 6 cm (2.3 inches) on September 15, 2021. The Alert Level is still at Yellow for the municipalities of El Paso, Los Llanos de Aridane, Mazo, and Fuencaliente de la Palma.

From 03:18 UTC on September 11 when the current seismic episode started to 08:00 UTC on September 14, a total of 2 935 earthquakes have been detected in the southern area of ​​the island of La Palma, of which 61 were located.

Until 12:00 UTC on September 15, 4 222 earthquakes have been detected, of which 920 were located, Spanish National Geographic Institute (IGN) said.1

Activity continues to migrate in a northwesterly direction. 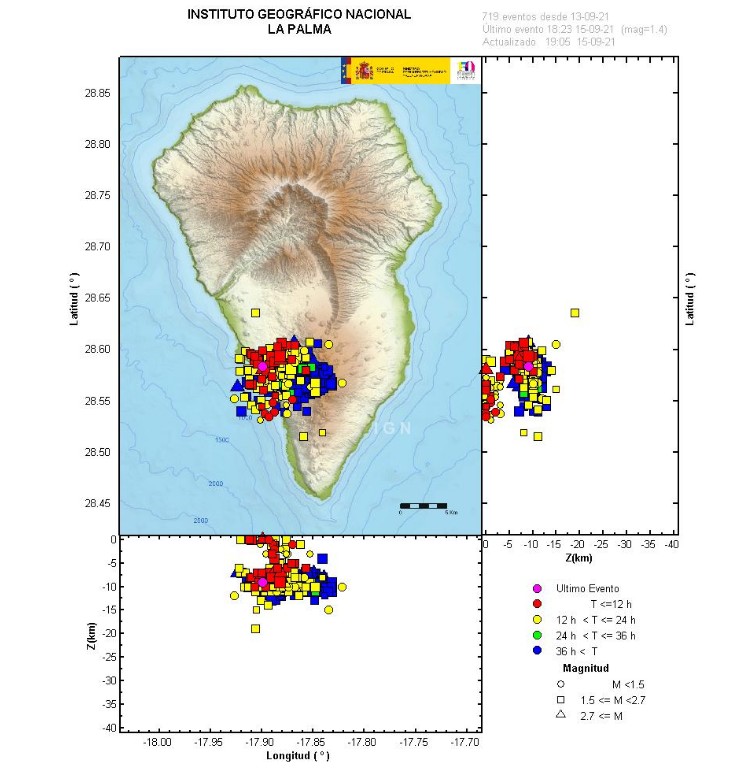 The maximum accumulated vertical deformation on September 15 is around 6 cm (2.3 inches), in the area close to seismicity and its distribution is still compatible with a center of pressure in this area. These movements have been observed both with the island's GNSS network and through InSAR data (Sentinel-1). Vertical deformation on September 14 was 1.5 cm (0.6 inches).

The eastern trend observed in previous days in the Cumbre Vieja inclinometer seems to have stabilized.

The figure below shows the horizontal (red arrows) and vertical (black arrows) displacement in some of the GNSS stations.

"This deformation pattern can be interpreted as the effect of the pressurization of a small magmatic reservoir, located inside Cumbre Vieja in the same area where most of the earthquakes of the recent swarm are located," the Volcanology Institute of the Canaries (INVOLCAN) said.2 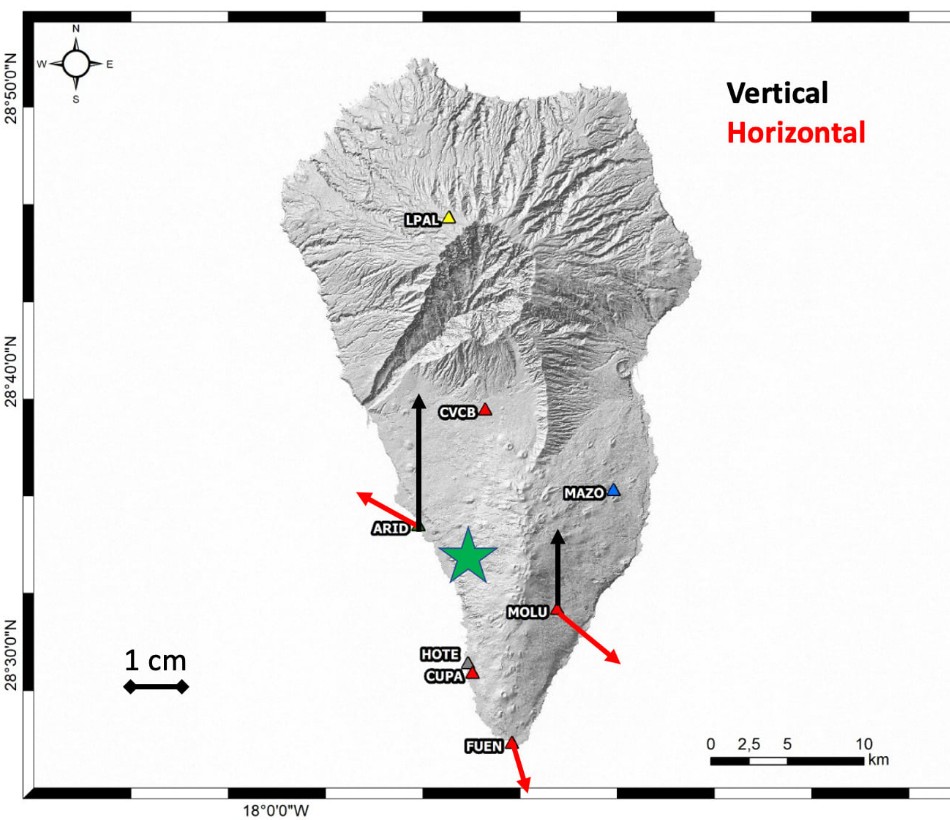 "This observation confirms that the source of this swarm has a magmatic origin and is related to the intrusion of a small volume of magma inside the Cumbre Vieja volcano.

"Remember that it cannot be ruled out that the seismicity felt in the coming days will intensify, depending on the evolution of the activity."

The Alert Level is still at Yellow for the municipalities of El Paso, Los Llanos de Aridane, Mazo, and Fuencaliente de la Palma.

Residents are advised to keep an eye on the information provided by Civil Protection authorities.

Seismic unrest at #LaPalma volcano (Canary Islands). #Sentinel1 Interferogram (asc. orbit) shows ~6 cm of signal in range decrease (toward the satellite) right above the swarm. Not sure if it is a real displacement, an artifact, or (more likely) a combination of the two. pic.twitter.com/uZPT5m3eB5