Claudette regained its tropical storm status on Monday morning, June 21, 2021, as it neared the coast of the Carolinas. This was after the storm left at least 13 people dead in Alabama; widespread damage and flooding in the neighboring states of Mississippi and Louisiana; and about 13 000 homes and businesses without power across the Florida Panhandle.

Tropical Storm Claudette formed at 09:00 UTC on Saturday, June 19, as the third named storm of the 2021 Atlantic hurricane season.

It made landfall in southeast Lousiana but weakened into a depression as it turned northeastward before moving through Mississippi, Georgia, and Alabama.

The storm brought gusty winds, flash flooding, and several tornadoes to much of the Southeastern U.S., with areas in Alabama and Mississippi as the worst hit. Several areas of the Gulf Coast were flooded as Claudette moved across land throughout the day. 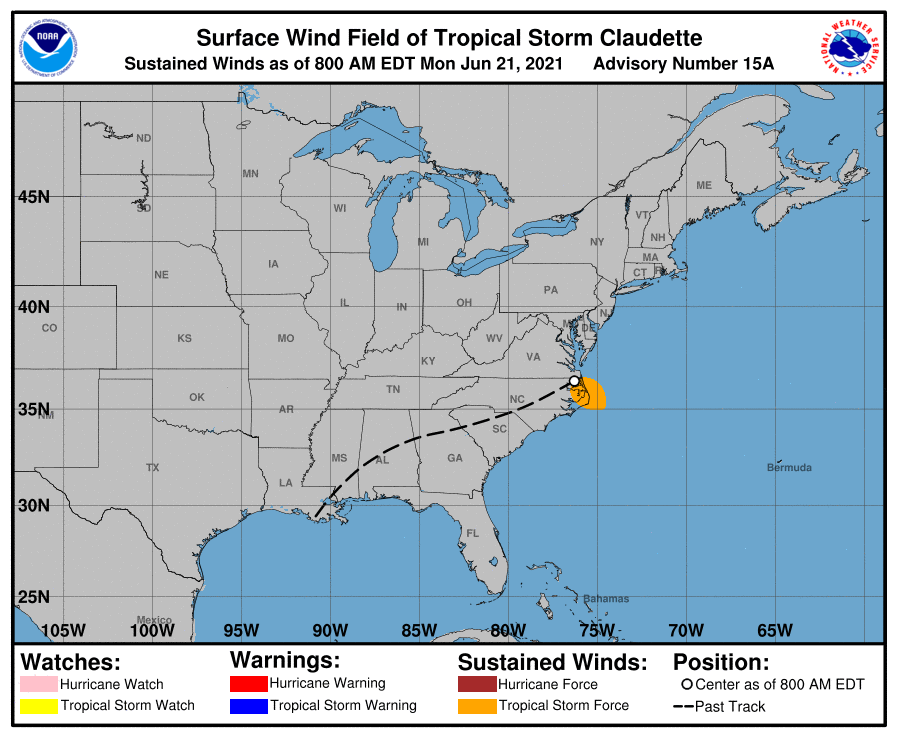 "You wouldn't even recognize them now," said Jackson. "Debris and broken branches were scattered across the neighborhood."

Tornado damage in East Brewton. We are all fine, but the trailer park is in bad shape. @rzweather @spann pic.twitter.com/6hm00s9gUZ

Many residents in the Shoreline Park community in Hancock County, Mississippi, are stuck inside their elevated homes because of river flooding caused by #Claudette. The streets have been overcome with water for hours. @sunherald @NWSNewOrleans #mswx pic.twitter.com/6xsa9N4odV

Crews are also working in a nearby neighborhood on Forest Avenue. pic.twitter.com/y8VbBCpy3y

At least 13 people died in the state of Alabama. According to Butler County Coroner Wayne Garlock, 10 of the victims– nine of whom were children– were involved in a multi-vehicle collision on Saturday. The children were in a van for a youth home for the abused when it likely hydroplaned, said Garlock.

In a separate incident, a 24-year-old father and his 3-year-old son died in their house after a fallen tree struck the residence in Tuscaloosa County.

A 23-year-old woman also lost her life after her car ran off the road into a flooded creek, DeKalb County Deputy Coroner Chris Thacker told WHNT-TV.

Search operations are underway for a man believed to have fallen into floodwaters in Birmingham. Crews were using boats to search Pebble Creek.

Tornadoes were also reported in several areas. In Pace, Florida, several houses were damaged. No injuries were reported.

Wind gusts of up to 130 km/h (80 mph) were recorded in Pensacola Beach, where some windows were blown away and at least one hotel and a tractor-trailer blew over on the I-10.

Highways and bridges were closed throughout the region, including portions of Highway 90 between Biloxi and Pass Christian, Mississippi. Flooding and sand engulfed much of the roadway, while elevated homes in Hancock were surrounded by floodwaters.

In Sidell, Louisiana, police deployed rescue vehicles due to widespread flooding. "We are currently clearing/have cleared approximately 40 to 50 vehicles out of the roadways due to them being flooded with water," said authorities.

"Last night/early this morning, we had to rescue multiple people from their flooded cars, along with a woman, who was on her way to the hospital, possibly going into labor."

The storm left around 13 000 homes and businesses without electricity across the Florida Panhandle counties of Santa Rosa and Escambia. Downed trees, power lines, and damaged buildings were reported after high winds and a possible tornado struck Saturday morning.

PHOTOS: We are now getting photos from the scene of yesterday's crash on Interstate 65 in Butler County that killed 10 people, including nine children. The coroner says it's likely that the rain caused the vehicles to hydroplane.#alnews #alabamanewsnetwork pic.twitter.com/wQQmbdp0v8

Several homes were damaged near Milton, Florida as #Claudette raced through the Pensacola area this morning. pic.twitter.com/TSpuvdNnqr

Video shows Tropical Storm Claudette bringing heavy rain and winds to Fairhope, Alabama. The storm battered the Florida panhandle and much of Alabama on Saturday, as the weather system moved toward the North Carolina coast. pic.twitter.com/s4qjT635Ej

Tropical Storm #Claudette made landfall in Louisiana today. The remnants will move across southeast states over the next few days bringing flooding, gusty winds and possible tornadoes.

This was the view at Navarre Beach, Florida earlierhttps://t.co/PYsbiU82l4 pic.twitter.com/mTmwPDWmvx

ICYMI: The outer bands of #Claudette brought scenes like this across Florida. #FLwx

Winds gusted up to 60 mph as this storm moved northeast. We are tracking how this storm is expected to strengthen and the potential impacts live on @WeatherNation. pic.twitter.com/LAS3TgxDdn

According to the National Hurricane Center (NHC), Claudette regained its tropical storm status and is located around 104 km (65 miles) east-southeast of Raleigh, North Carolina, packing maximum sustained winds of 65 km/h (40 mph) as of 09:00 UTC (05:00 LT) on Monday, June 21.

A tropical storm warning is in effect for Cape Fear to Duck in North Carolina and Pamlico and Albemarle Sounds. 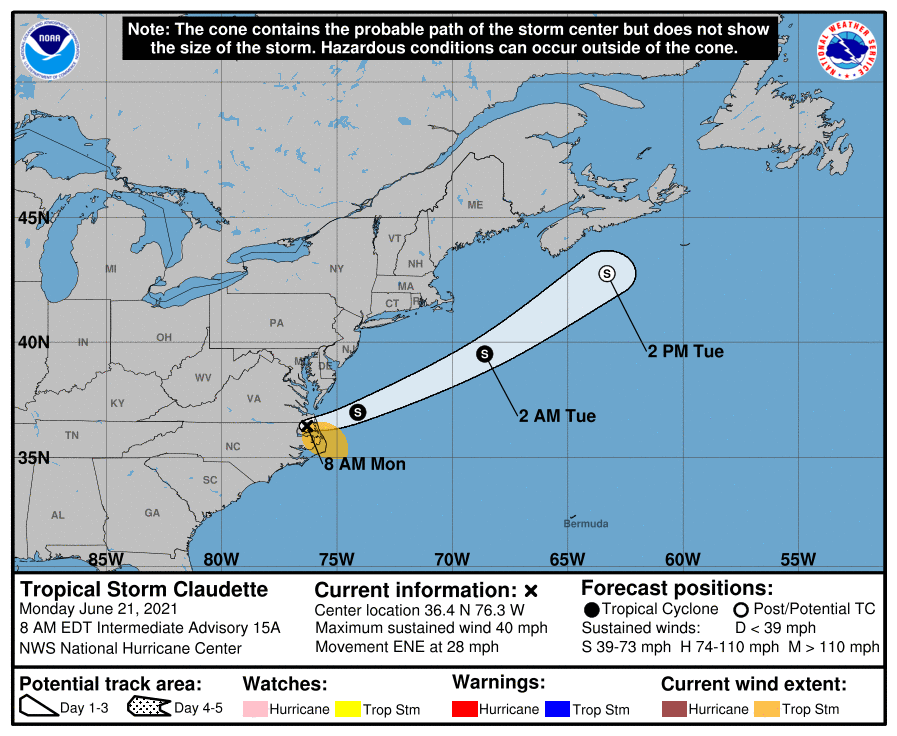 The storm system is forecast to cross into the western Atlantic Ocean and pass south of Nova Scotia by Tuesday, June 22.

Maximum sustained winds have increased near 65 km/h (40 mph), with higher gusts. The winds are mostly over water, southeast of Claudette's center. Some additional strengthening is likely over the western Atlantic Ocean.

Claudette is forecast to become a post-tropical cyclone on Tuesday afternoon and dissipate later that day. 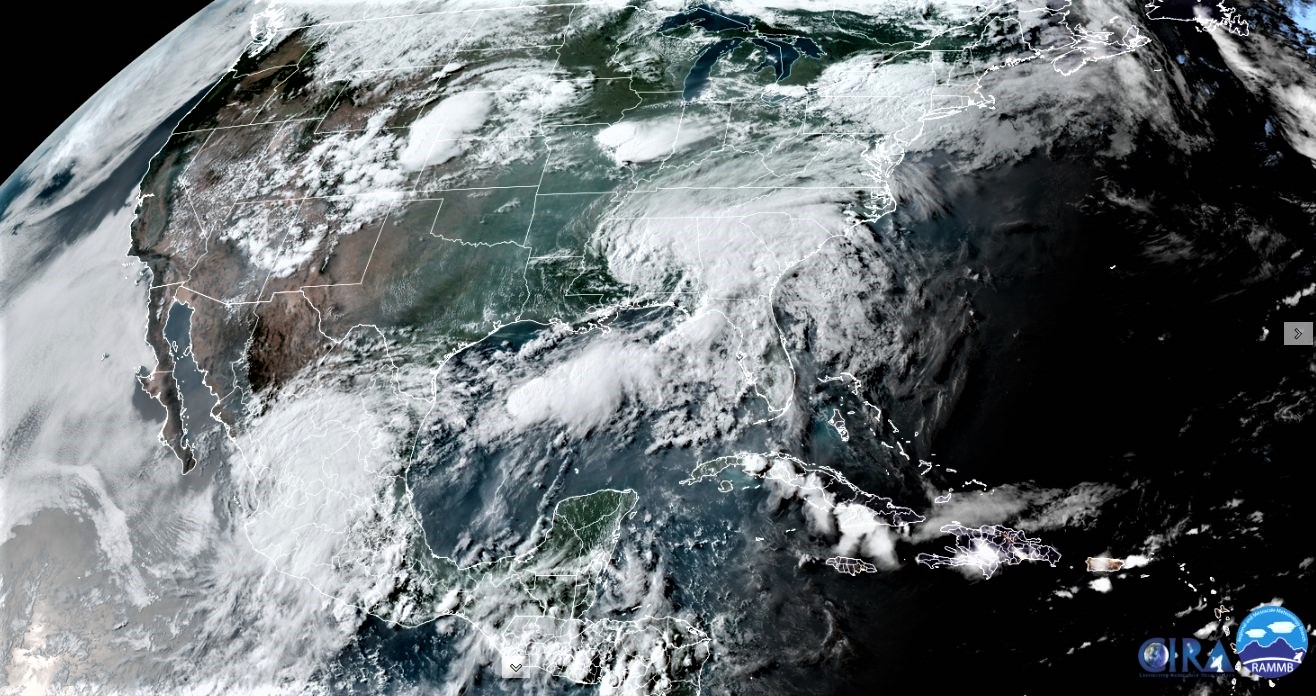