At least 6 people have been injured and 16 homes heavily damaged after a radar-confirmed tornado swept through suburban Chicago, IL at around 23:09 LT on Sunday, June 20, 2021. This could end up being the first strong tornado (EF-2+) in the metro Chicago counties since 2015.

The twister touched down near Woodridge and continued toward Naperville, where at least 6 people were injured and at least a dozen homes suffered extensive damage. 1 person is reportedly in critical condition while 5 sustained only minor injuries.

According to University of Oklahoma research meteorologist Sam Emmerson, the debris may have been lofted to at least 5.4 km (18 000 feet). This height is typically indicative of stronger tornadoes.

It's never good to have to do these analyses this late at night, but the tornado that hit Woodridge, IL and nearby suburbs of Chicago was likely a strong EF3 based on an impressive 18,000+ ft TDS and a 66 kt Vrot, both remarkable for a QLCS tornado! #ilwx pic.twitter.com/ICdv3V15y4

The tornado weakened as it moved toward the south side of Chicago. 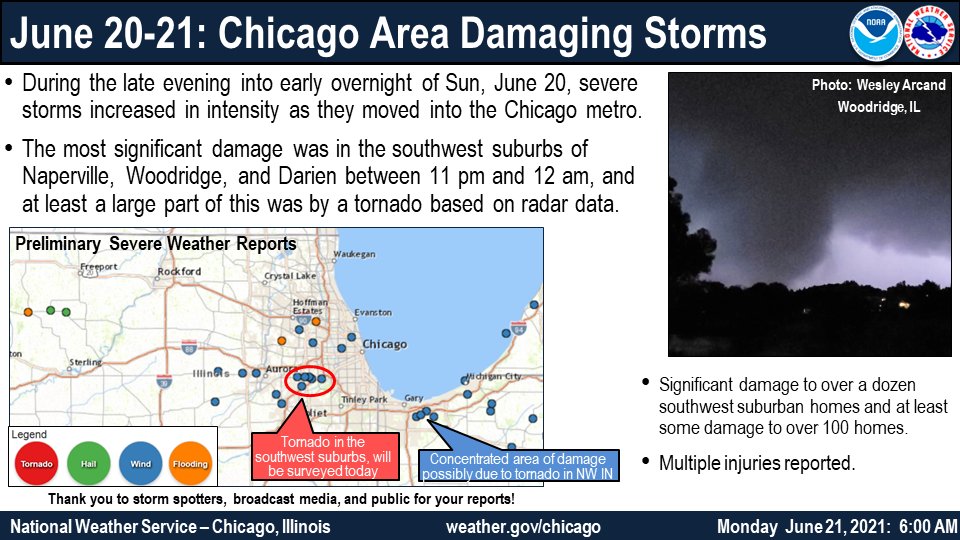 The most significant damage was in the southwest suburbs of Naperville, Woodridge, and Darien, between 23:00 and 00:00 LT, NWS Chicago said.

"We'll have some preliminary event information on our website and here on our Twitter feed by about 7 AM CDT and during the morning we'll be formulating plans for damage survey teams," NWS Chicago said.

First off, our thoughts are with those who experienced injuries or significant damage from these storms.

At least one damaging tornado occurred in the southwest Chicago metro & will be surveyed today.https://t.co/49AVS6R7rw #ILwx #INwx pic.twitter.com/UTrfwSDxKB