An outbreak of severe thunderstorms, rare for the month of May, struck southern Queensland on Wednesday, May 12, 2021, producing about 71 000 lightning strikes over Brisbane in just 4 hours. Intense thunderstorms were reported from southeast Queensland to far northeast New South Wales.

"It's unusual for an outbreak of severe thunderstorms to hit southeast Queensland in May. It's also unusual for the sky to be green. But on Wednesday, both happened," Weatherzone's Ben Domesino said.

Of those, 5 400 were cloud-to-ground strikes with the rest within or between clouds, causing 'arguably the most impressive feature' of yesterday's storms — huge green hue hanging over Brisbane.

It's time for a #ThrowbackThursday post: 24 hours ago, southern Queensland's skies were blackened by severe thunderstorms as this time-lapse video indicates. Presently, the skies over Brisbane are clear. Stay up to date with the latest #QLDweather https://t.co/rGe4v6Uf2B #TBT pic.twitter.com/oK0PqRgcXS

"When an intense thunderstorm containing large quantities of rain and hail occurs while the sun is low in the sky, the combination of red or orange light in the atmosphere and the light being scattered by the storm itself can produce a distinct green hue in the storm cloud," Domesino explained, adding that such phenomenon is usually only seen in mature and intense storms.

"Next time you see green storm clouds in the sky, it would be a good idea to find some shelter."

The storm produced damaging winds, up to 25 mm (1 inch) of rain within an hour, and dropped hail as big as 5 cm (2 inches) west of Brisbane. 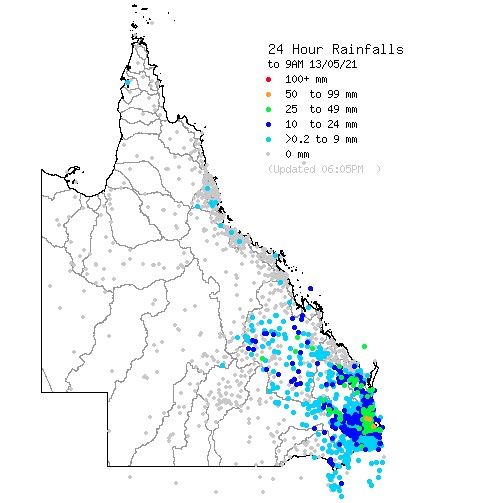 This is the second time severe storms hit the state since the start of the month — an unusual occurrence as such storms are more common in the period between October and April. "May is supposed to be a transitional month," said BOM meteorologist Shane Kennedy.

The current weather is being caused by the remnants of La Niña (warmer oceans off the coast) combining with cooler troughs moving up from the south, Kennedy said.

In the first half of the month, some areas of Queensland have received up to four times as much rain as the average monthly total.

Featured image: Thunderstorm over Brisbane, Australia on May 12, 2021. Credit: BOM