Post-tropical cyclone Isaias has moved into southeastern Canada after bringing heavy rains, powerful winds, and multiple tornadoes across much of the Eastern U.S., where more than three million people were affected by widespread power outages and at least nine people died. The storm barreled through the Caribbean, hitting Puerto Rico, the Dominican Republic, the Bahamas, and Florida from July 30 to August 3. It then made a historic landfall in North Carolina on August 4 as the first such storm to touch down in the state since 2011 Irene. At least 1 person died in Puerto Rico and 2 in the Dominican Republic.

As of 09:00 UTC on Wednesday, August 5, 2020, the storm was located near Lac-Croche in Quebec, packing maximum sustained winds of around 64 km/h (40 mph), moving north-northeast at 45 km/h (28 mph), according to the last advisory issued by the National Hurricane Center.

Isaias impacted an expansive area– from the Caribbean to the U.S. East Coast– leaving millions affected and at least 12 fatalities due to severe weather-related incidents. It became a tropical storm late on July 29, when it was centered south of Ponce, Puerto Rico.

The storm brought heavy rains that triggered major flash flooding in portions of Puerto Rico after it made landfall on July 30. Around 450 000 customers and 23 hospitals lost power supply, while about 150 000 people lost water service due to blackouts and blocked intakes.

Many surrounding towns in the eastern region were left without drinking water and electricity. A woman died after being swept away by a river in Rincon while attempting to cross a bridge.

Up to 90 km/h (56 mph) of wind gusts toppled trees and power lines. Due to extensive damage, President Donald Trump approved an emergency declaration for the nation. Thousands of people were evacuated.

Isaias lashed the Dominican Republic during the same day, causing widespread damage and at least two fatalities. One of the victims died when a power line fell on him and his horse in El Seibo Province. The other victim was a 5-year-old boy who was hit by a felled tree in Altamira.

In Haiti, about three dozen residential areas were damaged or destroyed by powerful winds across the northern and central departments, the UN OCHA reported.

From July 31 to August 1, Isaias passed over the Bahamas with winds up to 90 km/h (56 mph), impacting some areas that were still recovering from the catastrophic Hurricane "Dorian" in 2019.

Homes battered by Dorian may not survive another upcoming storm, said Paula Miller, director of Mercy Corps in the Bahamas. Initial damage assessments started on August 2, with reports showing damage in the Berry Islands and Andros Island. 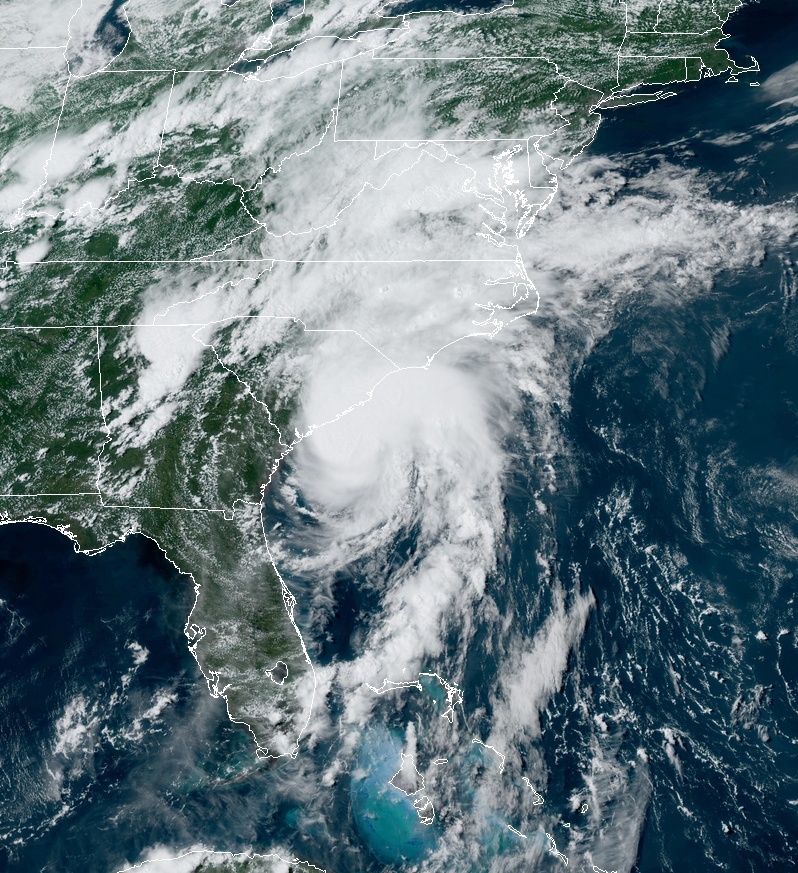 The storm brushed off the coast of Florida and Georgia with gusty winds and rain into August 3. On August 4, Isaias made historic landfall in North Carolina as a Category 1 hurricane, packing winds up to 137 km/h (85 mph).

The storm spawned a couple of tornadoes in Bald Had Island and Windsor, while another caused damage near Chowan University. A gauge near Myrtle Beach recorded its third-highest tide since it was set up in 1976.

The storm left at least nine people dead across the East Coast before heading to Canada. In Windsor, North Carolina, at least two people died when a tornado struck a mobile home park, Bertie County officials confirmed. 12 others were injured and were taken to the hospital.

In southern Maryland, a driver was killed when a tree collapsed on his vehicle.

At least three separate tornadoes were reported in the southern part of the state on Tuesday, August 4, of which two were in St. Mary's County while the other was in Calvert.

Six possible tornadoes were reported in Delaware and one in New Jersey. Multiple tornado warnings were issued throughout Virginia, Maryland, and Delaware.

In Courtland, an EF-2 twister caused major damage, while EF-0 and EF-1 tornadoes hit Downtown Suffolk. Another one hit Vienna and Mardela Springs, knocking down numerous trees and lifting a house off its foundation. As a result, one person was injured.

A 60-year-old was found dead by the New York Police Department due to trauma on the head and body, while an 83-year-old woman was found under a branch in a pond in Delaware.

Widespread flooding was reported in parts of the region, including in Pennsylvania, where water rescues were conducted in Belmont Hills and Chadds Ford. In Prospect Park, flooding swept across Lincoln Avenue.

A woman aged 44 lost her life when her vehicle was swept downstream in an inundated area of the Upper Saucon Township.

In New Jersey, wind gusts of around 114 km/h (71 mph) caused power outages. The storm spawned multiple tornadoes across the state, including one that left a trail of destruction in Cape May County. A cleanup operation is underway in the Upper Township after a twister ripped through the area.

A state of emergency was declared as around 1.4 million people lost power. Powerful winds brought down a church steeple in Ocean City.

Drone 6 footage of the damage left by the tornado that went through Marmora, NJ. @6abc pic.twitter.com/fzOJui3TUk

Employees working at this business took shelter in the basement as the roof was partially blown off in Marmora. No injuries. @6abc #6abcaction pic.twitter.com/g6VOdZJney

Nearly three million people lost access to power across the region. Across Virginia and Maryland, about 400 000 customers lost power supply and 100 000 in Delaware.

As of Wednesday morning, August 5, there were about 988 000 customers without power in New Jersey, more than 700 000 each in New York and Connecticut, and more than 100 000 each in Pennsylvania and Massachusetts.

As Isaiah left, the U.S. Geological Survey crews from South Carolina to New York assessed waterways to measure the effects of the storm and determine whether it has impacted water quality. The samples gathered will be tested for flood-borne sediment, which is a potential contributor to pollution.

From August 3 to 4, the Storm Prediction Center received at least 40 tornado reports, most of which were from the East Coast. More than 20 were from North Carolina to Pennsylvania.

At 09:00 UTC, the center of the post-tropical cyclone was located near Lac-Croche in Quebec, Canada, with maximum sustained winds of 64 km/h (40 mph), moving north-northeast at 45 km/h (28 mph).

The storm has brought significant amounts of rain over several regions of Quebec, according to Environment Canada.

Power was disrupted to more than 50 000 customers and more outages may occur as the storm barrels inward, but crews are ready to restore electricity, said Hydro Quebec.

The Canadian Hurricane Center forecasts that Isaias will continue moving north-northeast until Thursday morning, August 6, with winds weakening along the way. 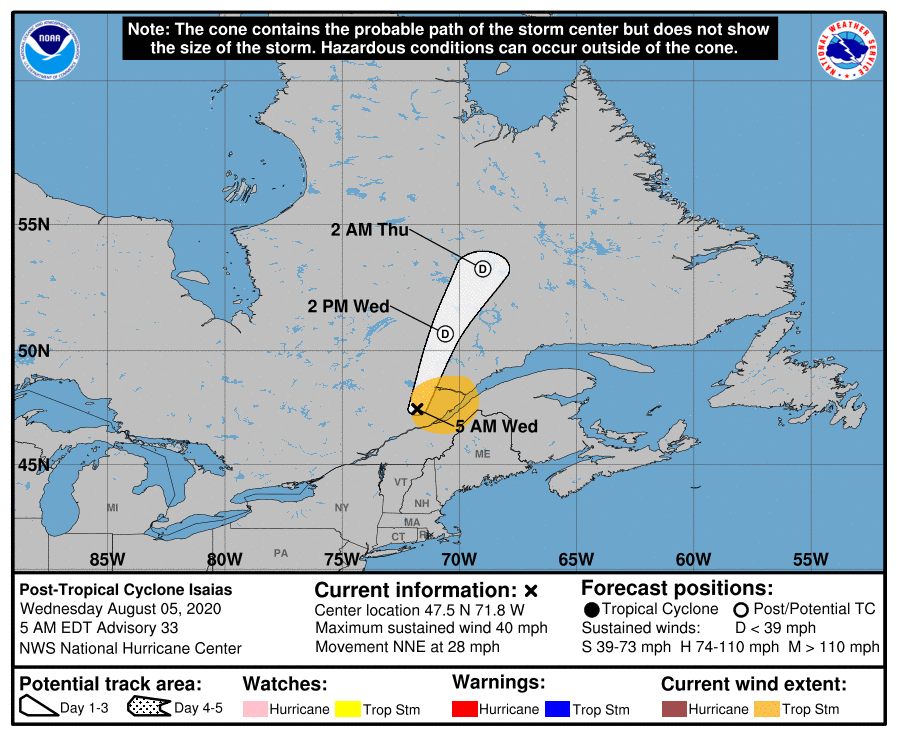 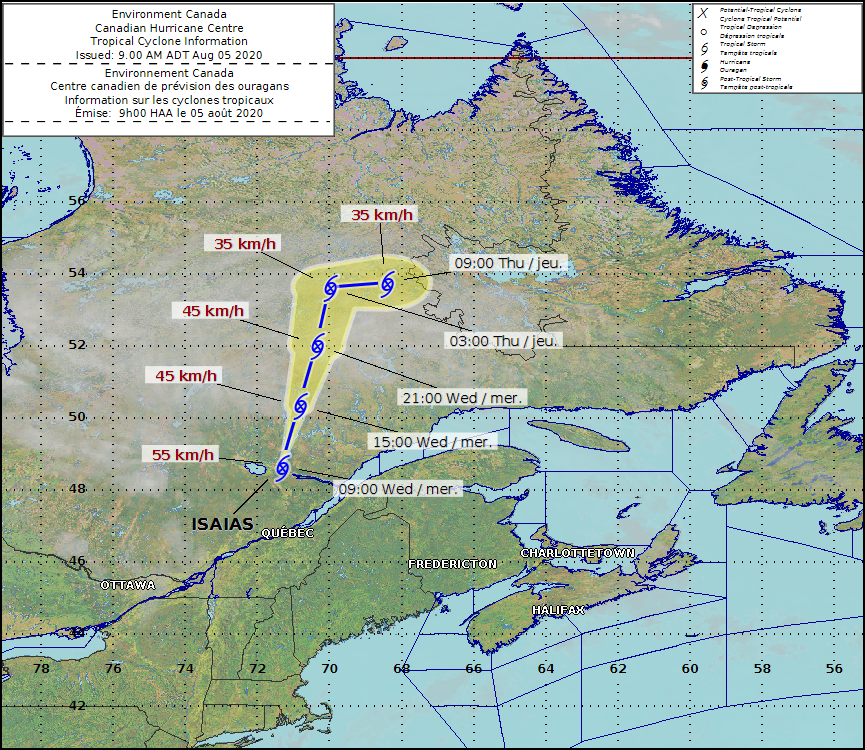 Isaias was the earliest named ninth Atlantic tropical cyclone on record. The previous record was held by Irene. The ninth named tropical storm usually occurs in the Atlantic basin in early October, which means this year's pace is over two months ahead of the average.