NASA's Global Precipitation Measurement (GPM) mission captured the rainfall accumulation across Asia– from India to Japan– this monsoon season, from June 1 to July 20, 2020. The data are remotely-sensed estimates that came from the Integrated Multi-Satellite Retrievals for GPM. The rainy season has brought record-breaking downpours, killing at least 550 people and affecting millions across South and East Asia.

The East Asian summer monsoon plays a major role in the region by providing water for crops, generating hydroelectric energy, refilling aquifers, to name a few.

However, the amount of rainfall has been so excessive that it has resulted in widespread flooding, hundreds of fatalities, thousands of properties damaged and millions affected.

NASA's Earth Observatory posted a map showing the rainfall accumulation across the region from the start of the summer monsoon season, June 1, to July 20. The data came from IMERG, a product of the GPM mission.

The darkest reds in the map indicate areas where GPM detected rainfall totals surpassing 1 000 mm (40 inches) during this period. Due to averaging of the satellite data, local rainfall totals may be significantly higher when measured from the ground. 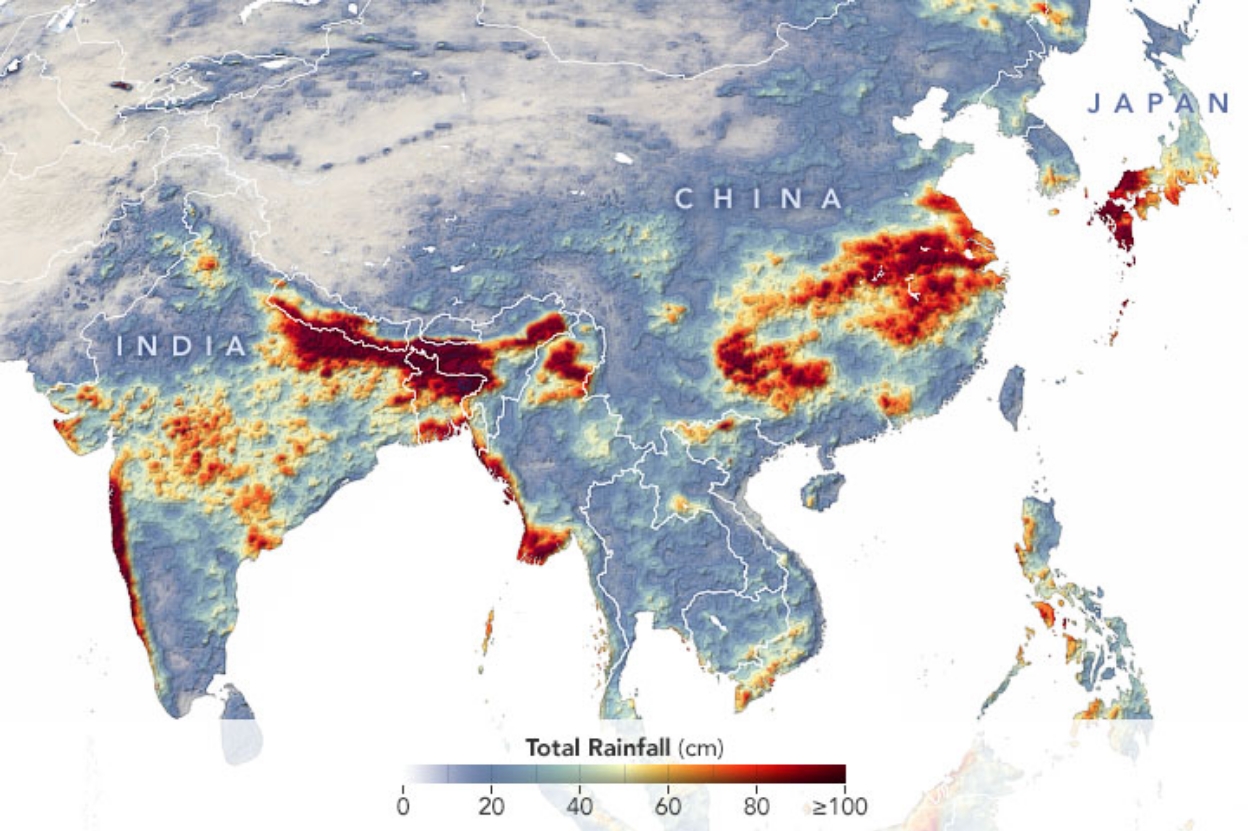 High rainfall amounts were noted across India. According to the World Meteorological Organization (WMO), many parts of the country's north, northeast, and central regions had received 150 mm (6 inches) more rainfall than average by mid-July.

For instance, the northeast state of Assam had recorded a total of 890 mm (35 inches) of rain between June 1 to July 22, which was around 20 percent more than the usual.

The downpours brought severe flooding that cut off villages and displaced thousands of residents. As of July 22, six million people are affected, while 90 000 have been displaced.

The death toll due to rain-related incidents, including flooding and landslides, has reached 470 across nine states. Flooding also drowned hundreds of animals, especially in the Kaziranga National Park, where rare one-horned rhinos perished.

This includes Poyang Lake, which reached a record-high of around 23 m (75 feet) on July 13, surpassing the yearly average maximum of 19 m (62 feet). The lake has also reached its highest since 1998.

In Japan, parts of the western region had received three times the usual amount of rainfall for the entire month– just one week into July. This triggered flooding and landslides, causing the country's highest rain-related death toll in more than 30 years.

This year's low-pressure systems of Asia's summer monsoon have been particularly strong and stationary, allowing them to carry even more moisture from the Indian and Pacific oceans.