A team of geophysicists warned that Wei Mountain in northeast China could be "recharging" for an eruption after two huge magma chambers were discovered under the volcano, which last erupted more than half a million years ago.

The researchers said they discovered two vast magma chambers under Wei in the Wudalianchi volcanic field in Heilongjiang, near the border with North Korea and Russia. The models indicate the chambers dwarf the volcano, which is about 100 m (330 feet) tall and 5 km (3 miles) wide.

The volcano's last eruption was more than 500 000 years ago and was already considered extinct, making the discovery a surprise to the geophysicists.

The researchers have been more focused on Changbai or Paektu Mountain, whose explosion in 946 A.D., was one of the strongest volcanic events in history. But the volcanic fields of Wei and Changbai "would be linked to some degree," the study noted.

For the study, geophysicist Zhang Haijang and a team from the University of Science and Technology of China in Hefei, Anhui, studied almost 100 sites across Wei Mountain.

They used sensors to spot electromagnetic abnormalities underground and found magma, an unusual blip from 15 km (9 miles) underground), and another one at 8 km (5 miles).

The computer modeling suggested there could be two huge magma chambers with a combined depth of more than 9 km (6 miles). The chambers were part of a larger system that could be "linked with the Changbai volcano by secondary mantle convection." 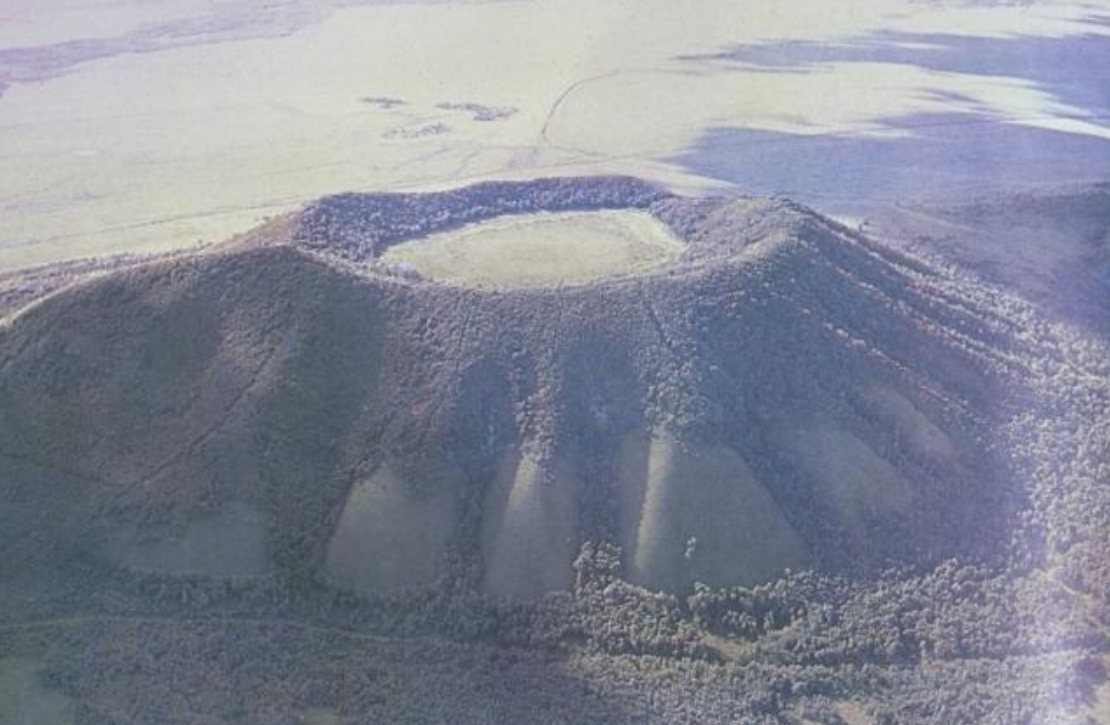 Based on the calculations, 15 percent of the upper chamber was now filled with molten rock. Some studies said a volcanic eruption may occur when a chamber fills to 40 percent magma.

Zhang and the team remarked that seismic activity had increased at Changbai from 2002 to 2005, indicating "magmatic activity beneath the volcano was increased." Its last eruption was in 1903.

"Volcanic activity in northeast China is likely to be in an active stage, and active volcanic monitoring is needed to further understand the magmatic systems in this region," they concluded.

According to Xu Jiandong, director of the volcanic research division at the China Earthquake Administration in Beijing who was not involved in the study, the last eruption at the Wudalianchi field was in the early 18th century, which formed two volcanic mountains, Laohei and Huoshao.

"We have not detected any sign of active magma chambers under Laohei and Huoshao, which is very strange considering the recent eruption event," said Xu.  Seismic stations had been monitoring the volcanoes for decades.

Now, the results of the Wei study added to the mystery. "If there really are huge magma chambers in the area, we should have detected some related seismic activities– when the lower chamber recharges the upper one, there should be some movement," he added.

"But so far, after decades of monitoring on the site, we’ve picked up almost nothing. The whole area has been very, very quiet."

Xu also said that it was too early to say that the chambers even existed. While the abnormal signals detected by Zhang's team appeared to be magma chambers, they could have been caused by other substances with high conductivity, like water or rocks.

"What we know for certain is that the Wudalianchi region is active – it’s like congee boiling in a pot," said Xu.

The last volcanic eruptions at the intraplate Wudalianchi volcanic field in northeast China were ~300 yr ago. Recent ambient noise tomography (ANT) imaged a potential magma chamber beneath one of its volcanoes, the Weishan volcano, which last erupted at ca. 50 ka. To image the spatial distribution of the magmatic system and estimate the melt fractions beneath the Weishan volcano, we use a dense magnetotelluric (MT) network (average site spacing of ~1 km) around the Weishan cone to image a three-dimensional (3-D) resistivity structure beneath the volcano. For the first time, 3-D MT inversion illuminates the high-resolution spatial distribution of a very low-resistivity body of ~0.3–3 Ω·m at depth of ~2–15 km beneath the Weishan volcano. From the 3-D resistivity model, it can be deduced there exists a magma chamber in the upper and middle crust. From both low-velocity anomalies from ANT and low-resistivity anomalies from MT imaging, melt fractions of magma reservoirs are reliably estimated to be >~15%. From the morphology of magma reservoirs and the shallow magma chamber, the Weishan volcano can be best described by the model of transcrustal magmatic system. Considering the significant melt fractions and active earthquakes and tremors occurring around magma reservoirs, the Weishan volcano is likely in an active stage with magma recharging. Therefore, it needs more active monitoring for better forecasting of its potential future eruptions.