Researchers reporting in Nature Communications suggest they've unlocked the secret of explosive volcanism. The team studied samples at Indonesia's Mount Merapi, concluding that explosivity of stratovolcanoes rises when mineral-rich gases seal the pores and microcracks in the uppermost layers of stone.

Geoscientists have typically used seismic measurements that explain underground movements when warning the public of an upcoming eruption. Now, a team of researchers from around the world, including scientists from the Technical University of Munich, has discovered another indicator for an impending eruption in the lava from Merapi's peak. The uppermost layer of the stone, the "plug dome", becomes impassable for underground passes prior to the explosion.

"Our investigations show that the physical properties of the plug dome change over time," said professor H. Albert Gilg from the TUM Professorship for Engineering Geology.

The research findings result in new possibilities when predicting an eruption.

"Following an eruption, the lava is still easily permeable, but this permeability then sinks over time. Gases are trapped, pressure rises and finally the plug dome bursts in a violent explosion," he further explained.

The researchers, using Mount Merapi as a model, took six lava samples– one from an eruption in 2006, and the others from the1902 explosion. Analysis of pore volumes, densities, mineral composition, and structure unveiled that permeability pummeled by four orders of magnitude as stone alteration increased.

It was explained that newly formed minerals were the cause, particularly potassium and sodium aluminum sulfates which seal the fine cracks and pores in the lava.

Computer simulations confirmed that the weakened permeability of the plug dome was responsible for the next eruption.

According to the models, a stratovolcano like Mount Merapi undergoes three phases: First, when the lava is still permeable after an explosion, outgassing may occur. Second, the plug dome becomes impermeable for gases, while the internal pressure continuously increases at the same time. Third, the plug dome bursts due to pressure. 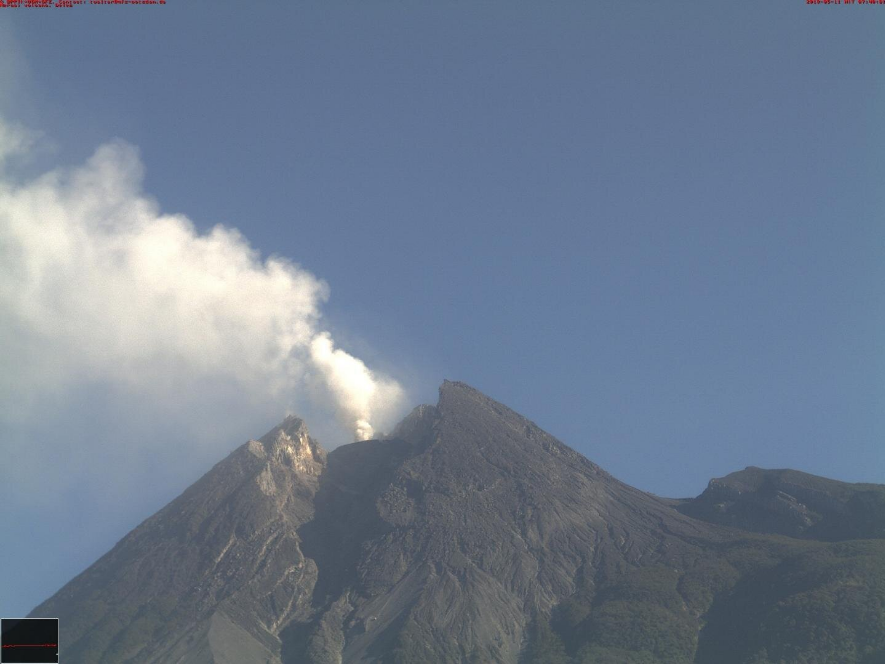 Images of Merapi from the period before and during the eruption of May 11, 2018 show the three-phase model. First, the volcano emitted smoke. Second, it stayed quiet for a while until the gas found an escape, and lastly, it blew a fountain of ashes up into the sky.

"The research results can now be used to more reliably predict eruptions," Gilg said. "A measurable reduction in outgassing is thus an indication of an imminent eruption."

Mount Merapi is not the only volcano whose outgassing measurements can help in the timely forecasting of an upcoming eruption.

Stratovolcanoes are a common source of destruction throughout the Pacific– the most renowned examples are Mount Pinatubo in the Philippines, Mount St. Helens in the western USA, and Mount Fuji in Japan.

Dome-forming volcanoes are among the most hazardous volcanoes on Earth. Magmatic outgassing can be hindered if the permeability of a lava dome is reduced, promoting pore pressure augmentation and explosive behaviour. Laboratory data show that acid-sulphate alteration, common to volcanoes worldwide, can reduce the permeability on the sample lengthscale by up to four orders of magnitude and is the result of pore- and microfracture-filling mineral precipitation. Calculations using these data demonstrate that intense alteration can reduce the equivalent permeability of a dome by two orders of magnitude, which we show using numerical modelling to be sufficient to increase pore pressure. The fragmentation criterion shows that the predicted pore pressure increase is capable of fragmenting the majority of dome-forming materials, thus promoting explosive volcanism. It is crucial that hydrothermal alteration, which develops over months to years, is monitored at dome-forming volcanoes and is incorporated into real-time hazard assessments.