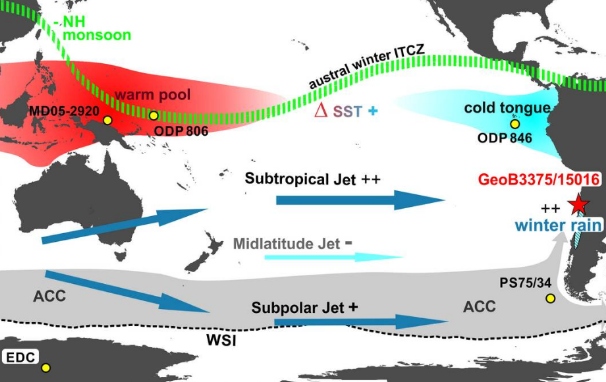 A recently published study showed findings that in the past million years, the high-altitude winds of the southern westerly wind belt – which spans nearly half the Earth – did not behave as uniformly over the Southern Pacific, as initially assumed. The researchers identified what is known as precession cycles – changes triggered by natural variations in the Earth's orbital parameters – in this case, cyclical changes in the rotation of its axis that took place around every 21 000 years.

Dr. Frank Lamy, a geoscientist at the Alfred Wegener Institute, Helmholtz Centre for Polar and Marine Research, authored the study alongside researchers from Chile, the Netherlands, the USA, and Germany.

The findings said changes in the south-westerly wind belt had significant effects on the Antarctic Circumpolar Current's intensity and position. It is where the world's largest ocean current is, and it shapes the circulation of oceans in the world.

One key factor in this regard is the wind-driven upwelling of CO2-rich deep-water masses, which influences both the stability of the West Antarctic ice sheet and the carbon budget of the Southern Ocean.

The team examined precipitation-driven changes in sediment input in the Pacific, off the coast of Chile. After studying the past one million years, the researchers identified what is known as precession cycles – changes triggered by natural variations in the Earth's orbital parameters – in this case, cyclical changes in the rotation of its axis that took place around every 21 000 years. 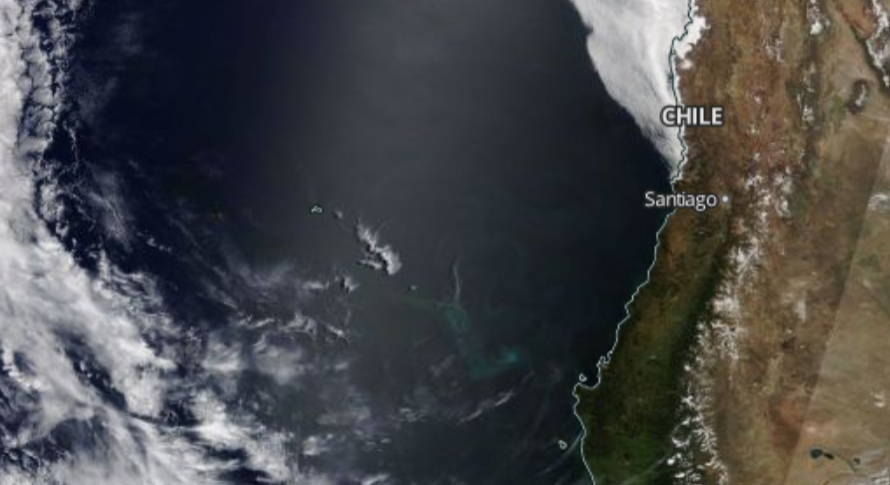 These changes and that of other orbital cycles are considered to be a significant driver for the alternation between extended glacials and interglacials million years ago.

"At first it was hard to explain why the changes in the composition of continental sediments up to the southern margin of the Atacama Desert in northern Chile indicated pronounced precipitation variations over the 21 000 years, but less pronounced variations throughout the longer-term cycles of interglacials and glacials," said sedimentologist Helge Arz of the Leibniz Institute for Baltic Sea Research Warnemunde.

The nature of the phenomenon was decoded with the help of John Chiang, an American climate modeler from the University of California, Berkeley. 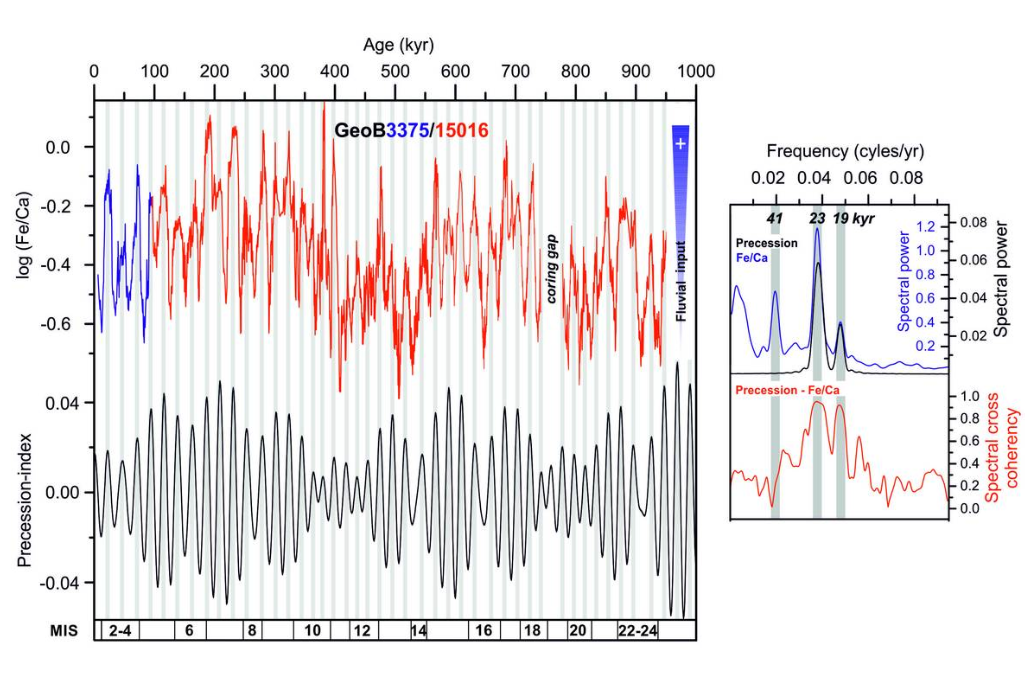 "Our climate models show that the precipitation changes recorded in the sediment cores are connected to the configuration of high-altitude winds over the subtropical Pacific. In this regard, the division of the high-altitude wind changes into a northern, subtropical branch, a middle branch, and a subpolar branch in the course of the 21 000-year cycle."

"The study provides the first evidence of long-term changes in the high-altitude winds of the southern westerly wind belt over the South Pacific," Lamy said.

"Our findings indicate closer atmospheric ties between the tropics and mid to high latitudes than in other sectors of the Southern Hemisphere, with consequences for global overturning circulation and the storage of atmospheric CO2 in the ocean." 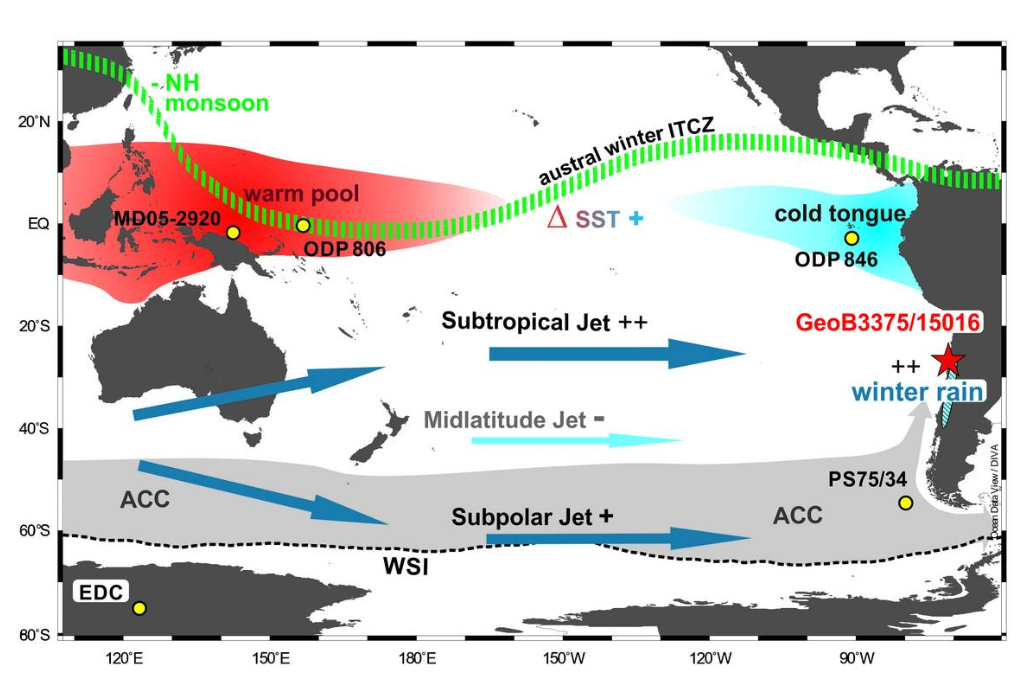 The researchers' findings are necessary to understand the current and future large-scale climate mechanisms in the comparatively under-researched Southern Hemisphere.

One vital aspect is the coupling of the tropical Pacific with the source of the global climate phenomenon, El Niño Southern Oscillation (ENSO) and the West Antarctic.

The information showed that the West Antarctic ice sheet's high sensitivity to ENSO in the Pacific sector is most likely also significant over much longer time scales.

"A change in the high-altitude winds over the South Pacific in response to the increased frequency and intensity of El Niño events that many climate models predict would reduce the stability of the West Antarctic Ice Sheet, while also negatively impacting CO2 storage in the South Pacific," Lamy explained.

"Precession modulation of the South Pacific westerly wind belt over the past million years" – Lamy, F. et al – Proceedings of the National Academy of Sciences of the United States of America – https://doi.org/10.1073/pnas.1905847116

The southern westerly wind belt (SWW) interacts with the Antarctic Circumpolar Current and strongly impacts the Southern Ocean carbon budget, and Antarctic ice-sheet dynamics across glacial-interglacial cycles. We investigated precipitation-driven sediment input changes to the Southeast Pacific off the southern margin of the Atacama Desert over the past one million years, revealing strong precession (19/23-ka) cycles. Our simulations with 2 ocean-atmosphere general circulation models suggest that observed cyclic rainfall changes are linked to meridional shifts in water vapor transport from the tropical Pacific toward the southern Atacama Desert. These changes reflect a precessional modulation of the split in the austral winter South Pacific jet stream. For precession maxima, we infer significantly enhanced rainfall in the southern Atacama Desert due to a stronger South Pacific split jet with enhanced subtropical/subpolar jets, and a weaker midlatitude jet. Conversely, we derive dry conditions in northern Chile related to reduced subtropical/subpolar jets and an enhanced mid-latitude jet for precession minima. The presence of precessional cycles in the Pacific SWW and lack thereof in other basins indicate that orbital-scale changes of the SWW were not zonally homogeneous across the Southern Hemisphere, in contrast to the hemisphere-wide shifts of the SWW suggested for glacial terminations. The strengthening of the jet is unique to the South Pacific realm and might have affected winter-controlled changes in the mixed layer depth, the formation of intermediate water, and the buildup of sea-ice around Antarctica, with implications for the global overturning circulation and the oceanic storage of atmospheric CO2.