Heavy rain and gusty winds produced by a potent, slow-moving ocean storm / nor'easter are expected to linger over southeastern New England into Saturday, October 12, 2019. Meanwhile, an early-season major winter storm continues across the Northern Plains as an anomalously cold air mass drops into the Central U.S. and interacts with a vigorous storm system. Critical to extremely critical fire weather conditions continue across portions of Southern California due to gusty winds and a very dry airmass.

"A significant and potentially dangerous situation is unfolding which may catch some folks off guard as an early-season offshore ocean storm system develops," the NWS Boston office said Wednesday, October 9. "Plan accordingly and take action as necessary toward the protection of life and property." 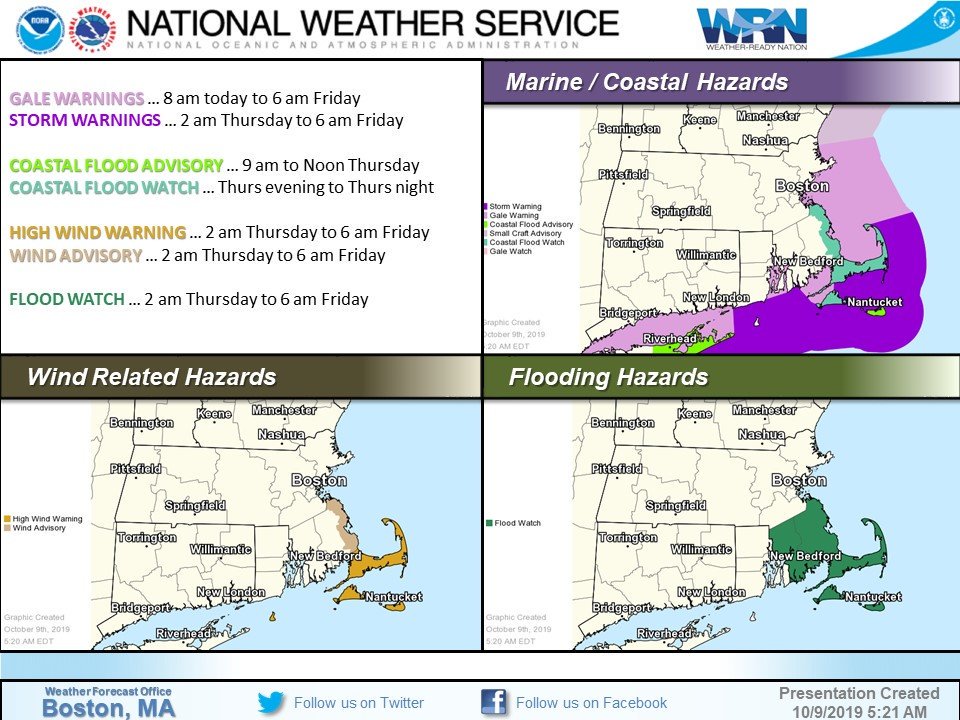 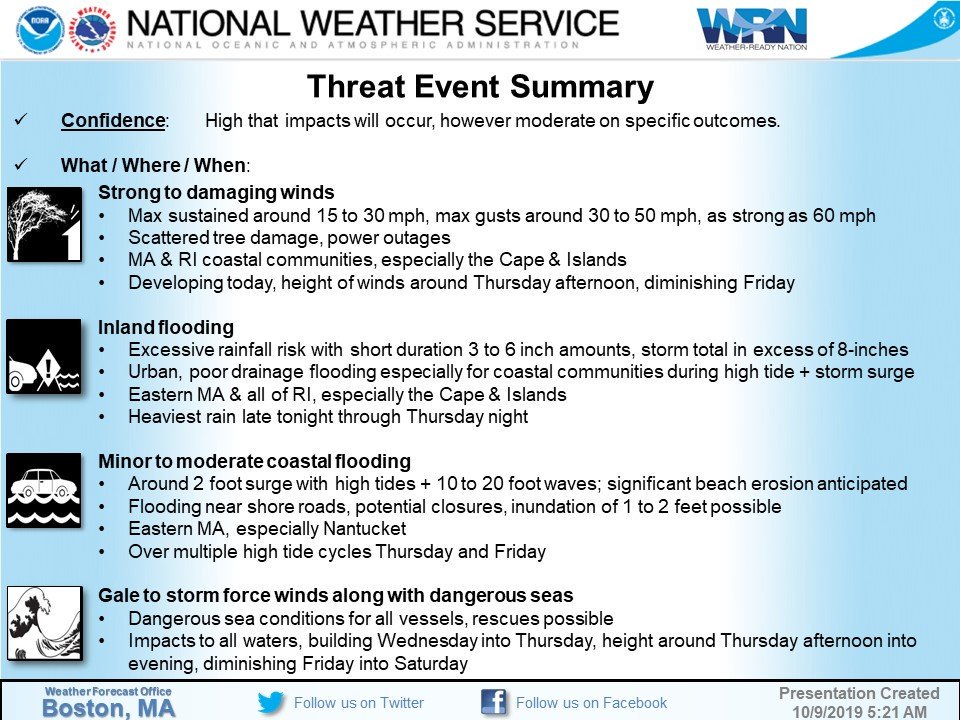 The view of our #Noreaster from #GOES16 satellite. It's the counter clockwise swirl offshore which is strengthening and expanding in size with time. Its circulation impacting #MA #RI #CT with gusty northeast winds, periods of rain and cool temperatures pic.twitter.com/Qa2HLGnE3I

[11p] Looking at observed rainfall totals. Over 1-inch amounts have been observed across E-portions of CT into Central RI.

Additional rainfall to come esp across SE MA w/ the potential of seeing a storm-total of 6-8" of rain across Plymouth Co. MA as well as the Cape & Islands. pic.twitter.com/5btuqHXWA5

Thanks Colleen! High surf & significant beach erosion are the main issues for the eastern MA coast, along with minor coastal flooding from Boston to Cape Cod. https://t.co/bbPlxE31Uf

[#Noreaster] Convection (#thunderstorms – taller clouds) firing on northwest side of ocean storm well south of #Nantucket. Meanwhile on the backside of the storm enough dry air promoting some sunshine across western portions of #MA #CT into #NY pic.twitter.com/hr4yw4uERQ

An additional 25 mm (1 inch) of rainfall is still possible before the rain begins tapering off on Saturday as the low finally drifts away from the coast.

Meanwhile, an early-season major winter storm continues across the Northern Plains as an anomalously cold air mass drops into the Central U.S. and interacts with a vigorous storm system.

Heavy snowfall across the Northern Plains will continue Friday into Saturday as the storm system is slow to exit the region. The heaviest axis should focus across eastern North Dakota where an additional 30 – 60 cm (1 to 2 feet) of snow is expected.

Strong and gusty winds will accompany this system resulting in blowing snow and dangerous travel.

Blizzard warnings are in effect across portions of north-central North Dakota. A very cold air mass has spread across the Western U.S. and into the Plains, and widespread record lows remain likely again on Friday morning for many locations from the Southern/Central Plains to the Great Basin.

Along and ahead of the sharp cold front from the Mississippi Valley to the Ohio Valley, heavy rainfall is possible on Friday, though the front will be progressive enough to limit a widespread flash flood threat.

Critical to extremely critical fire weather conditions will continue on Friday across portions of Southern California due to gusty winds and a very dry airmass. These conditions should subside by the weekend as an upper level trough approaches the region.

The fire jumped a portion of Interstate 5, and is rapidly moving toward the northern portions of Granada Hills, Porter Ranch and Chatsworth, in the vicinity of the 118 freeway.

"Be prepared and ready to evacuate if given the order," LAPD said.