Brazil's National Institute for Space Research (INPE) said the country's Amazon rainforest has seen 72 843 wildfires so far this year. The number represents an 83% increase over the same period of 2018 and a record since 2013 when their record-keeping began.

9 507 wildfires were recorded in the country in the past week, mostly in the rainforest, INPE said.

Wildfires have reportedly increased in the states of Mato Grosso and Para, where Brazil’s agricultural frontier has pushed into the Amazon basin and spurred deforestation.

Environmentalists and international media are emphasizing that the unprecedented surge in wildfires has occurred since president Jair Bolsonaro took over the office in January, vowing to develop the Amazon region for farming and mining.

"I used to be called Captain Chainsaw. Now I am Nero, setting the Amazon aflame. But it is the season of the queimada (wildfires),” Bolsonaro told reporters.

INPE said the large number of wildfires could not be attributed to the dry season or natural phenomena alone. "There is nothing abnormal about the climate this year or the rainfall in the Amazon region, which is just a little below average. The dry season creates the favorable conditions for the use and spread of fire, but starting a fire is the work of humans, either deliberately or by accident," INPE researcher Alberto Setzer said. 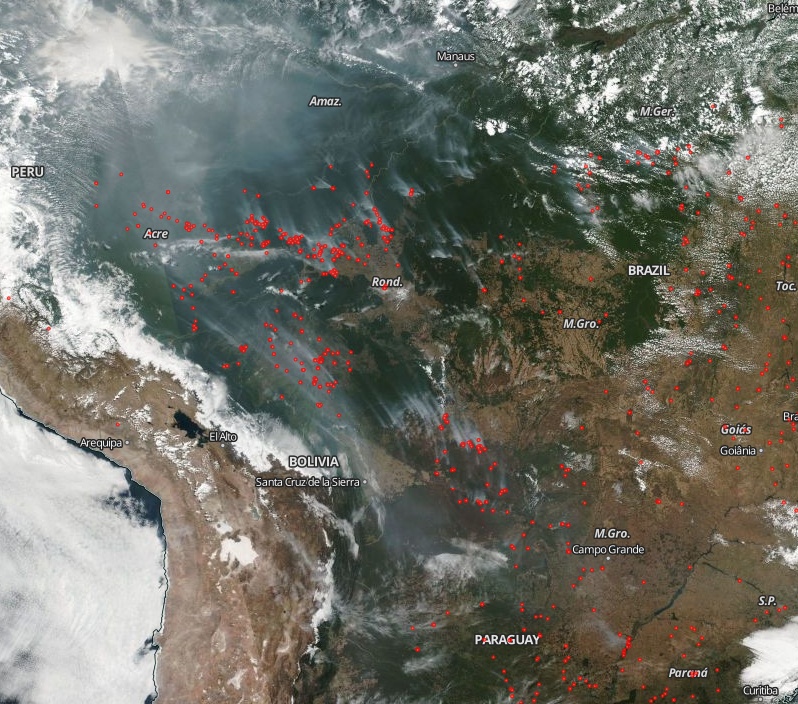 Earlier this month, INPE said they detected the biggest surge in deforestation rates since they adopted its current methodology in 2014. More forest was lost between May and July this year than during the same period in 2018, 2017 and 2016.

In July alone, the rainforest lost 2 254 km2 (870 mi2) of vegetation, between three and five times the surfaces lost the same month in the past four years.