A large landslide caused by heavy monsoon rains hit southern Myanmar on August 9, 2019, burying 10 houses and leaving at least 15 people dead. At least 30 others are missing.

According to Myanmar Fire Services Department, the landslide took place as the mountainside of Ma-lat mountain collapsed in Paung Township, Mon State.

At least 15 people have been killed, 30 are still missing and 27 have been injured. Search and rescue operations are still in progress.

The landslide hit at the base of a mountain just after 08:00 local time, a member of the rescue team said.

"It is difficult to tell detailed figures of casualties as search and rescue operations are still being carried out," Dr. Aung Naing Oo, deputy speaker of Mon state Parliament, told Xinhua. 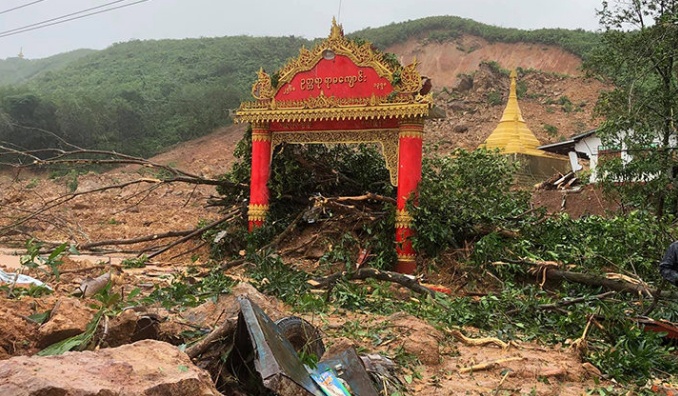 The region was already dealing with heavy flooding, with transportation limited or entirely shut down, according to The Irrawaddy.

Train routes between Rangoon to Ye Township have been canceled and much of the highways, completely submerged in water, have been closed off to cars, especially in Belin Township, where the Mon State government has opened eight camps that are currently housing 1 000 people displaced by flooding.

Authorities said Paung, Mawlamyine, Mudon, Thanbyuzayat, Kyaikmaraw and Ye townships were flooded and some schools were temporarily closed in Paung Township since early hours of Friday.

Some 26 000 people from 14 townships across the state have been displaced since August 3.