Tropical Cyclone "Veronica," now a Category 3 cyclone on the Australian tropical cyclone intensity scale, is slowly moving toward the Pilbara coast on March 23, 2019. A severe coastal impact is expected on Sunday, March 24. Veronica may be traveling slower than a typical system as it crosses the coast, and as a result communities in the path of the cyclone should prepare to shelter from destructive winds for an extended period of 12 hours or more.

Destructive winds have developed just offshore from the Pilbara coast and may extend to coastal areas between Roebourne and Port Hedland within the next 6 hours, TCWC Perth said 15:48 UTC (23:48 WST), March 23.

Very destructive winds near the center of the cyclone may affect coastal communities from as early as Sunday morning (LT) but are more likely in the afternoon. 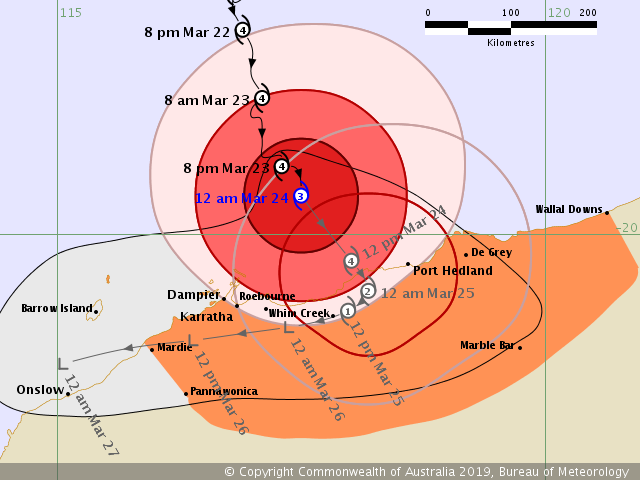 Gales with gusts to 100 km/h (62 mph) have developed between Dampier and Port Hedland, and may extend to other coastal communities between Wallal and Mardie during Sunday, the center said.

Destructive winds with gusts exceeding 125 km/h (78 mph) have developed just offshore from Dampier and are forecast to develop along the coast between De Grey and Roebourne during Sunday morning.

Very destructive winds with gusts in excess of 165 km/h (103 mph) are expected near the center of the cyclone as it approaches the coast during Sunday.

Late on Sunday gales may extend to adjacent inland areas including Pannawonica.

Veronica may be traveling more slowly than a typical system as it crosses the coast during Sunday, and as a result communities in the path of the cyclone should prepare to shelter from the destructive winds for an extended period of 12 hours or more.

Widespread very heavy rainfall conducive to major flooding is likely over the Pilbara coast and adjacent inland areas over the weekend. Heavy rainfall is expected to result in significant river rises areas of flooding and hazardous road conditions. Some roads may become impassable and some communities may become isolated.

People along the Pilbara coast are warned of the potential for a very dangerous storm tide as the cyclone approaches the coast during Sunday. Tides are likely to rise significantly above the normal high tide mark with damaging waves and very dangerous coastal inundation. 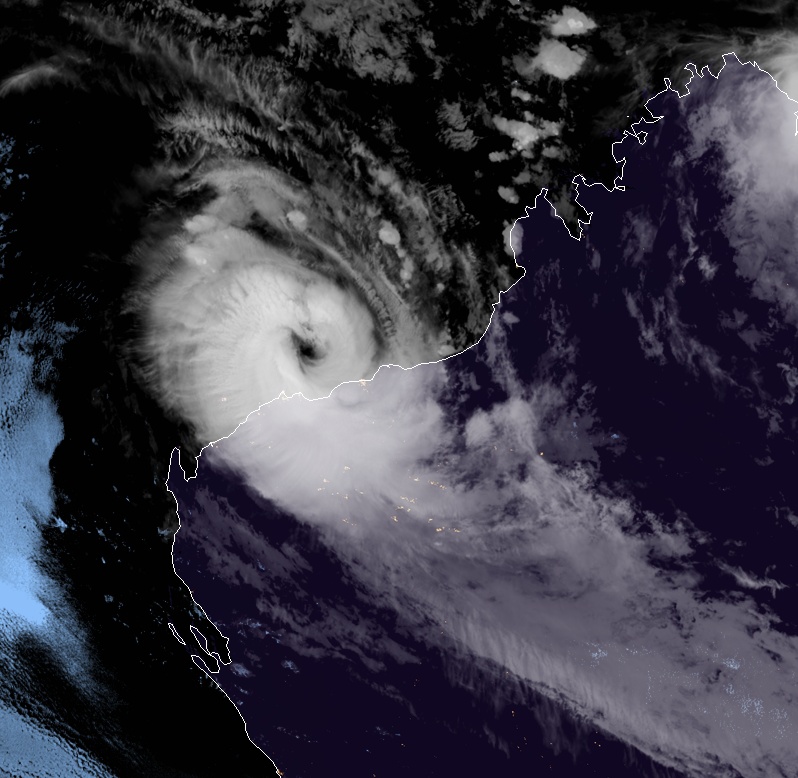 YELLOW ALERT: People in or near remaining communities between Wallal and Pardoo and inland to Marble Bar need to take action and get ready to shelter from a cyclone.

BLUE ALERT: People in or near communities for parts of the inland Pilbara including Pannawonica and Nullagine need to prepare for cyclonic weather and organize an emergency kit including first aid kit, torch, portable radio, spare batteries, food and water.