At least 15 structures were destroyed when a tornado hit Talbotton, Georgia on March 3, 2019, injuring at least 6 people. Another tornado hit Cairo, causing heavy damage just south of downtown. The tornadoes were a part of a series of destructive tornadoes across the South on March 3 in which at least 23 people lost their lives.

The emergency management director for Talbot Country, Leigh Ann Erenheim, said the tornado destroyed at least 15 structures, including multiple homes and at least one apartment building.

At least 6 people were injured, with the most severe being a possible broken leg. Erenheim said crews were checking on residents in the outer areas of town and working to open a shelter for people who have been displaced.

According to Cairo Mayor Booker Gainor, the twister damaged dozens of homes and businesses but there were no immediate reports of deaths or injuries. Several people, however, were trapped in their damaged homes and had to be rescued.

"It’s pretty bad," Gainor said. "We have a lot of trees down, debris and power lines. We have trees completely through houses. You would think a hurricane came after this, the way it looks."

Local reports are that Cairo, GA took a direct hit in the past hour from a tornado. Radar data indicates a chance that it was strong tornado. #gawx pic.twitter.com/3E2QkNCP9P

Per scanner, Cairo, GA is in desperate need of search/rescue volunteers. The city of Cairo likely took a destructive hit from the tornado earlier. #GAwx pic.twitter.com/V6yCbcYQ35

Local media said the entire town is damaged and school for students in Southeast Cairo canceled.

A tornado has been confirmed south of Quincy moving ESE towards Midway! Take shelter NOW if you are under this tornado warning! pic.twitter.com/epNASjwUrm

Another tornado was confirmed just south of Quincy, where numerous trees and power lines were downed. Quincy officials said there were no reports of widespread damage.

Several tornadoes were also reported in North Florida where numerous homes were damaged and at least one person injured. 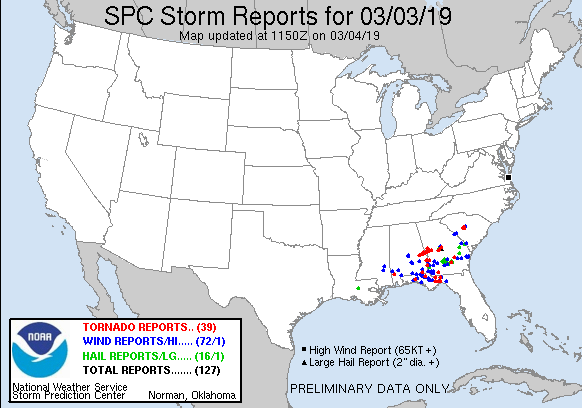 At least 23 people have been killed in Alabama's Lee County after two tornadoes, of which one was estimated as EF-3, hit the region back-to-back within 1 hour.

Authorities said they fear the death toll will rise as some people are still missing.

During the entire 2018, tornadoes in the United States killed 10 people.