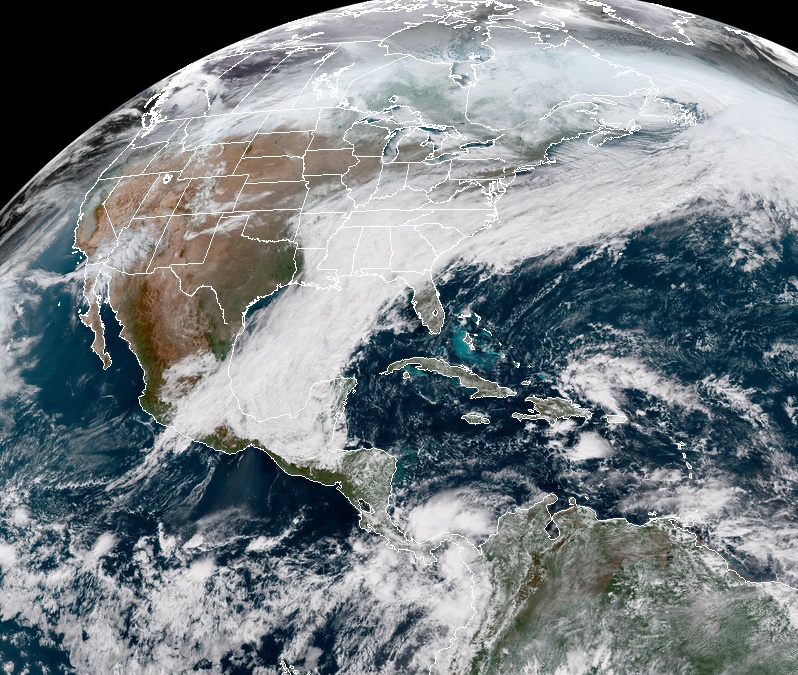 An early-season winter storm is expected to bring freezing rain and snow from Lower/Middle Mississippi Valley eastward to the Southern Appalachians and northward to the Northeast. The Weather Channel named this storm Avery; it is the first named storm of the 2018/19 season. Meanwhile, elevated to critical fire weather threats persist for southern California through Thursday, before hopefully subsiding on Friday.

A complex early winter storm is expected to produce heavy snow from the Mid Mississippi Valley to western Ohio Valley and Interior Northeast over the next couple of days. Potentially significant icing possible in the south-central Appalachians and heavy rain from the Southeast to Mid-Atlantic coast.

As this deep upper-level low moves northeastward, a surface low is expected to develop in the Tennessee Valley, with another surface low pressure system strengthening and moving along the Eastern Seaboard.

Wintry precipitation will begin on Wednesday, November 14 across parts of the Lower and Middle Mississippi Valley, spreading east and north to the Ohio Valley, Appalachians, Mid-Atlantic, and Northeast.

"Both snow and freezing rain are possible with this system," NWS forecaster Tate notes.

The heaviest snow on Wednesday is forecast for parts of the lower Ohio Valley under the upper-level low, with 100 – 200 mm (4 to 8 inches) of snow currently expected in southern Illinois.

More heavy snow is likely for interior portions of the northern Mid-Atlantic and Northeast by Thursday as the Eastern Seaboard surface low strengthens. 4 to 8 inches of snow is forecast there as well, with locally higher amounts.

Cities along the I-95 corridor are not expected to receive too much snow.

In terms of freezing rain, over a quarter of an inch of accumulated ice is likely, mainly in the Southern to Central Appalachians.

Lighter amounts of freezing rain could be seen across much of the Ohio Valley and into the Mid-Atlantic and Northeast.

Farther south, heavy rain will be a threat across the Southeast on Wednesday as moisture streams in ahead of the upper-level low. Generally, 25 – 50 mm (1 to 2 inches) of rain is expected across parts of the Southeast, and a Slight Risk of excessive rainfall/flash flooding is in effect for parts of Georgia and the Carolinas.

On Thursday, November 15 as the surface low moves north, heavy rain is possible across the coastal Mid-Atlantic region, where it will not be cold enough for winter precipitation.

Southern California will once again have a Critical Risk of fire weather on Wednesday, especially in the higher terrain, according to the Storm Prediction Center.

Winds will be particularly strong in the morning, with very low relative humidity and extremely dry ground from ongoing drought.

The death toll from the Camp Fire rose to 48 today and the statewide total to 50. Authorities released names of about 80 people who were still missing, including many in their 80s and 90s.