A lava-fueled thunderstorm over active lava fields in the lower East Rift Zone of Kilauea volcano in Hawaii produced about 1 200 lightning strikes within just 7 hours on July 2, 2018, NWS said.

According to West Hawaii Today, spokeswoman for Mayor Harry Kim said that the county 'got calls galore from people' concerning the intense thunderstorm, which was centered largely over fissure 8 in Leilani Estates, with lightning strikes also occurring along the 13 km long (8 miles) lava channel from the active fissure to the lava ocean entry at Kapoho.

Science and operations officer at the National Weather Service office in Honolulu, meteorologist Robert Ballard, said that the volcano was definitely a major player in Monday's weather.

"Seeing that is really unique for us, and we’re learning about how that’s going to have to change our forecast a little bit for that localized area," he said.

"While lava played a major role in the thundershowers, there were a couple of different things at play," Ballard said.

"The other major player was an upper level low (pressure system) that was about 600 km (370 miles) north of Hilo. And south of the upper level low, it was dragging a pocket of cooler-than-normal air across the Big Island."

"That’s why we had thunderstorms not only over the lava field, we also had a couple of isolated thunderstorms on Maunakea. There was also one on the slopes of Mauna Loa and even a brief one down in Ka‘u, as well," he said. "Another contributing factor was moisture rising from the laze plume at the lava’s ocean entry point in Kapoho." 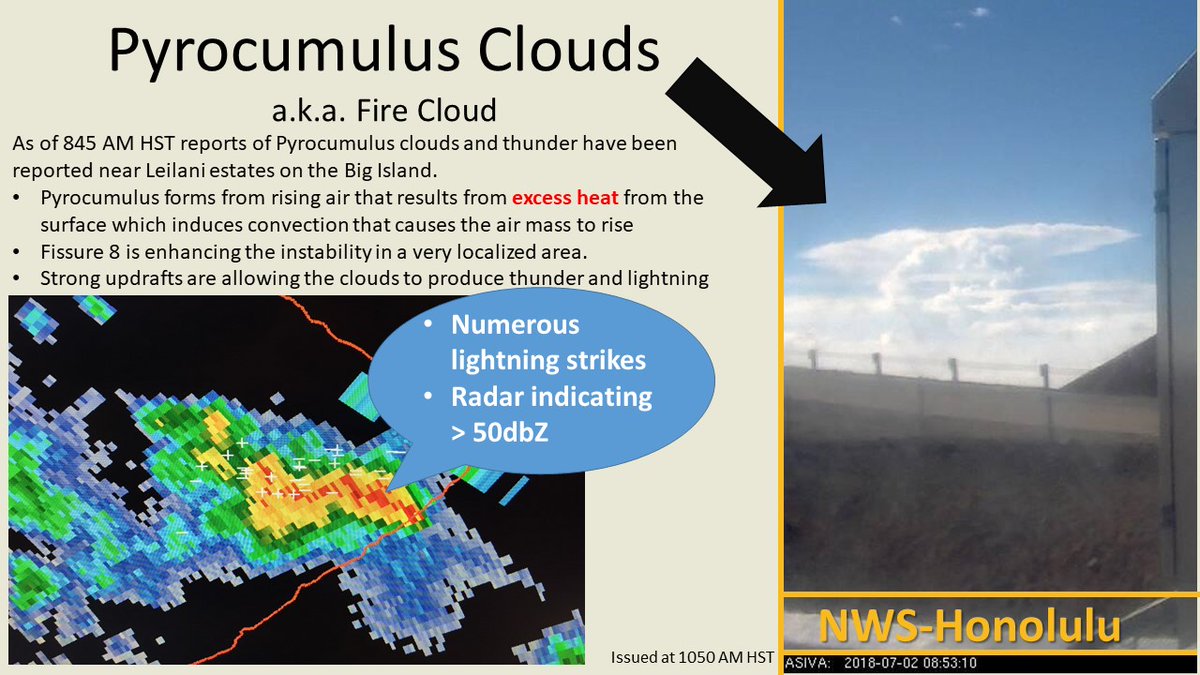 Another lava-related phenomenon that has been documented in videos and photos recently are small whirlwinds that seem to emanate from the lava. "These are not too dissimilar to waterspouts that we see at the base of cumulus clouds," Ballard said.

"Anytime you have a really strong updraft within the cloud, the air below it wants to pull inward. And it pulls inward… in a spiral, because it’s forming a weak, little low pressure area there. That’s how the whirlwind gets started. And once it gets started, it just feeds off the heat energy to sort of keep itself going and sustain itself."