Tropical Cyclone "Iris" re-intensified into a tropical cyclone on Sunday, April 1, 2018 while moving through the Coral Sea toward Queensland, Australia. Iris is now moving parallel to the coast of Queensland, dropping heavy rain on a region that already saw huge amounts of rain over the past weeks. While the system is not expected to make landfall, it will continue intensifying over the next 2 days, dropping heavy rainfall and causing local flooding and river rises from Wednesday. This could result in disruption to transport and isolation of communities, particularly if the system lingers close to the coast for an extended period. This cyclone first formed March 24 as the fourth named storm of the 2017/18 South Pacific ocean cyclone season.

Conditions over the Coral Sea have been favorable for tropical development over the weekend and Iris was renamed a Tropical Cyclone again on April 1. It was edging closer to the coast over the past two days before it made a sharp turn to the SE and intensified into a Category 2 storm on the Australian region tropical cyclone wind scale.

"Rainbands wrapping around the south side of the system have already produced significant rainfall between Mackay and Bowen," the Australian Bureau of Meteorology said. Mount William, for example, received 170 mm (6.7 inches) in the 24 hours to 09:00 local time, April 3.

Periods of sustained gales have been recorded in several locations on Coral Sea coast with Flinders Reef recording a 126 km/h (78.3 mph) wind gust this morning.

BOM forecasters expect Iris to continue moving southeast, parallel to the Queensland coast, for the next two days. "It may reach Severe category 3 intensity on Wednesday, April 4," they said.

On April 5, the cyclone should become slow moving and begin to weaken. However, it may reverse direction and adopt a track to the northwest overnight Thursday or on Friday, but there is high uncertainty in its long-term movement. 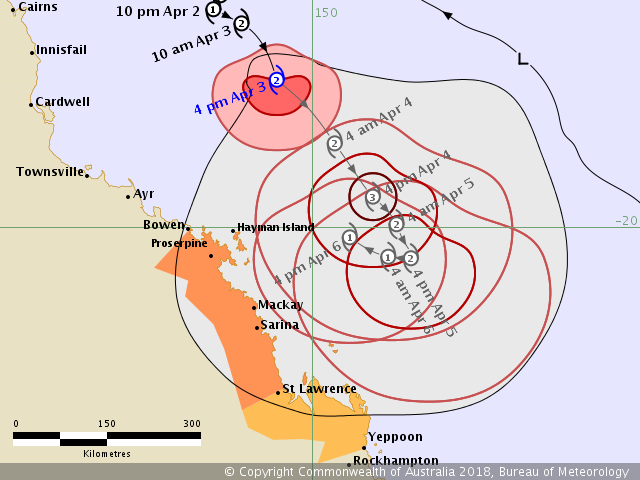 In the short to medium term, the cyclone is not expected to cross the Queensland coast but may still lie close enough to the coast to produce significant impacts.

A Tropical Cyclone Warning covers locations between Ayr and Sarina, including Mackay and the Whitsunday Islands and gales may develop through these areas this evening or early Wednesday morning. Destructive winds are occurring close to the core of the cyclone and could impact the coastal fringe and islands between Bowen and Mackay from early Wednesday morning if the cyclone were to take a more southerly track.

A Tropical Cyclone Watch covers locations from Sarina to St Lawrence and gales may extend to these locations later on Wednesday.

Iris is expected to bring heavy rainfall to coastal catchments this week, particularly on the southern side of the cyclone in this onshore flow, leading to local flooding and river rises from Wednesday.

This could result in disruption to transport and isolation of communities, particularly if the system lingers close to the coast for an extended period. A Flood Watch covers coastal catchments between Ayr and St Lawrence. 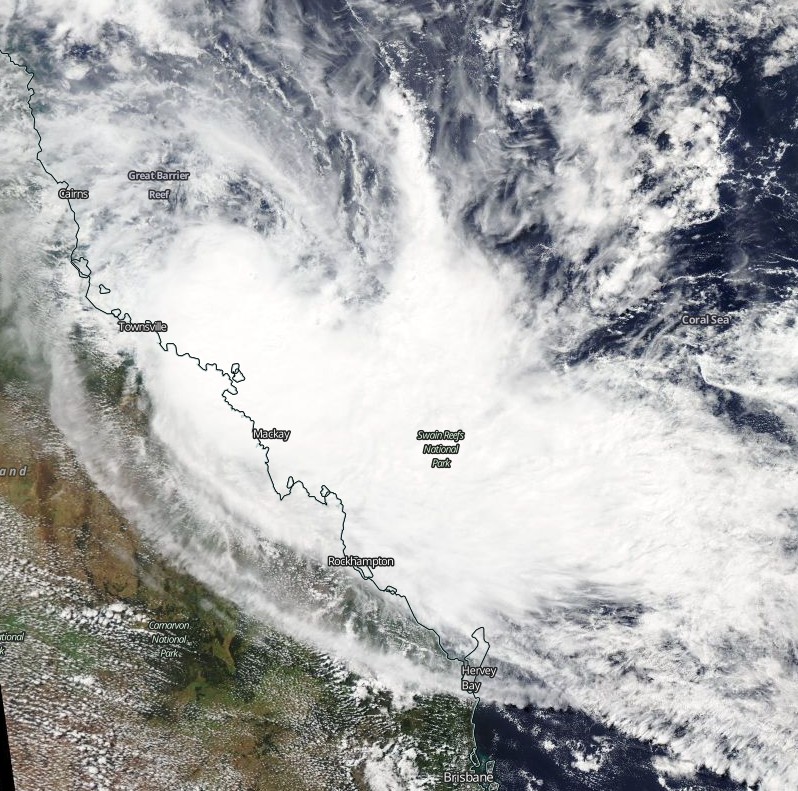 BOM is urging people between Bowen and St Lawrence including Mackay and the Whitsunday Islands, to immediately commence or continue preparations, especially securing boats and property using available daylight hours.