Kawah Ijen volcano located in the Ijen volcano complex at the eastern end of Java, Indonesia, released toxic gases on March 21, 2018, injuring 24 people. The incident started around 19:00 local time and peaked around 21:00.

Authorities said 30 people were exposed to gas and 24 of them sent to local hospitals.

One of the locals said that residents living in 3 hamlets close to the crater (Margahayu Hamlet, Watu Capil and Dusun Curah Macan), have been evacuated to Puskemas Kecamaten Ijen.

The volcanic alert level remains normal at this time but the crater has been closed due to toxic fumes. 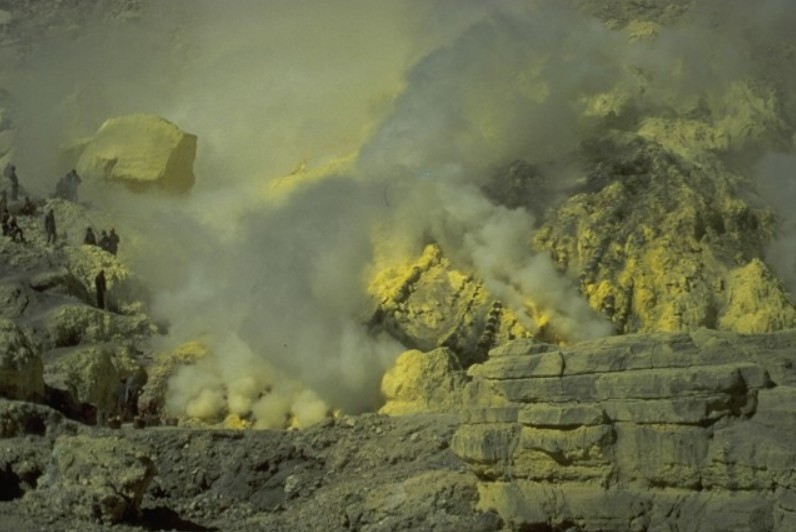 Sulfur miners (left) extract elemental sulfur from the crater walls of Kawah Ijen. Large baskets of sulfur are carried laboriously up to the crater rim and down its flanks. The sulfur factory is located at Jambu, on the SE flank above Banyuwangi. Photo by Tom Casadevall, 1987. Credit: U.S. Geological Survey

The Ijen volcano complex at the eastern end of Java consists of a group of small stratovolcanoes constructed within the large 20-km-wide (12.4 miles) Ijen (Kendeng) caldera.

The north caldera wall forms a prominent arcuate ridge, but elsewhere the caldera rim is buried by post-caldera volcanoes, including Gunung Merapi, which forms the high point of the complex. Immediately west of the Gunung Merapi stratovolcano is the historically active Kawah Ijen crater, which contains a nearly 1-km-wide (0.62 miles), turquoise-colored, acid lake.

Picturesque Kawah Ijen is the world's largest highly acidic lake and is the site of a labor-intensive sulfur mining operation in which sulfur-laden baskets are hand-carried from the crater floor. Many other post-caldera cones and craters are located within the caldera or along its rim.

The largest concentration of cones forms an E-W zone across the southern side of the caldera. Coffee plantations cover much of the caldera floor, and tourists are drawn to its waterfalls, hot springs, and volcanic scenery.