A new seismic swarm started under Cumbre Vieja volcano (La Palma), the Canary Islands on February 10, 2018. Quakes in this latest swarm are stronger than those in the previous swarm in October 2017, the first swarm in this area in 30 years.

In addition, there have been several hundred more which weren't detected due to their magnitude and depth. 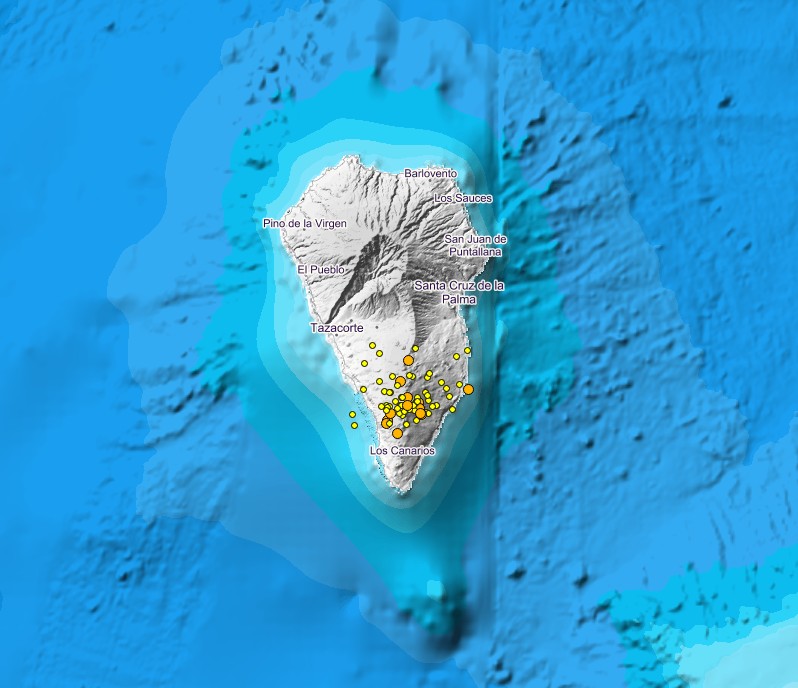 The depth of the quakes decreased during the course of the swarm, suggesting an upward movement of magma towards the surface.

The Canary Government called for an urgent meeting of the Scientific Committee for Evaluation and Monitoring of Volcanic Phenomena to discuss why the quakes are happening again and what might happen in the future. This is the second such meeting in four months.

INVOLCAN said that this new series is something expected based on geochemical measurements made in the Cumbre Vieja volcano.

The younger Cumbre Vieja, the southern volcano, is one of the most active in the Canaries. The elongated volcano dates back to about 125 000 years ago and is oriented N-S. Eruptions during the past 7 000 years have originated from the abundant cinder cones and craters along the axis of Cumbre Vieja, producing fissure-fed lava flows that descend steeply to the sea.

Historical eruptions at La Palma, recorded since the 15th century, have produced mild explosive activity and lava flows that damaged populated areas. The southern tip of the island is mantled by a broad lava field produced during the 1677-1678 eruption. Lava flows also reached the sea in 1585, 1646, 1712, 1949, and 1971. (GVP)