A rare heavy snowfall hit French capital on Tuesday and Wednesday, February 7, 2018, causing record traffic jams, delaying trains and flights and bringing its bus network to a standstill. With temperatures dropping as low as -10 °C (14 °F), weather authorities warned that the snow could turn into extremely dangerous ice sheets. Another round of snow is expected on Friday, followed by another temperature drop on Sunday.

The snow started falling across northern France on Tuesday afternoon and kept falling through early Wednesday. The storm dropped between 12 and 15 cm (4.7 – 5.9 inches) of snow on the city, locally up to 20 cm (7.8 inches), making it the heaviest snowfall the region has seen since 1986.

Nearly 2 000 people were stranded overnight on the N118 highway southeast of Paris, forcing many of them to continue on foot. Evacuations of at least 900 stranded people were underway on Wednesday.

Officials in capital Paris advised residents to leave their vehicles at home and banned traffic for vehicles weighing over 7.5 tonnes. Soon after that, the city's public transportation network collapsed.

The city's bus network was brought to a standstill as well as all school buses in two regions near Paris. SNCF rail service reported they had to slow down trains on several of its high-speed TGV lines, adding that the service was disrupted across much of northern France.

Flights were disrupted at Orly and Charles de Gaulle airports in Paris on Wednesday during de-icing operations. In addition, both airports reported many of their workers were late for work or left trapped on roadways.

The weather event has also forced Eiffel Tower to close its gates on Tuesday evening and is still closed as of Thursday morning. Other tourist attractions across the city were also forced to close or shorten hours.

Interior Ministry spokesman said there were some 2 500 emergency workers including 'police, firefighters, and gendarmes' trying 'to get things back to normal as quickly as possible.' 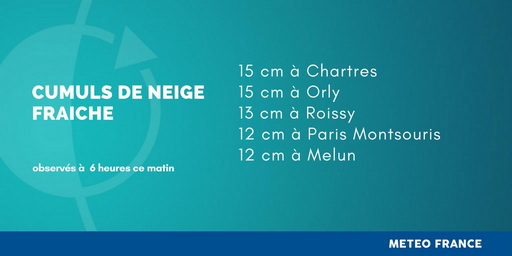 According to Meteo France, snow of this magnitude occurs every 10 to 20 years in Paris Montsouris region and every 20 to 25 years in Orly. "Without reaching records, these values are close to those found during the snow events that occurred in the Paris region in December 2010 or March 2013," the agency said.

Another round of snowfall is expected across much of France on Friday, February 9. With temperatures expected to drop again on Sunday, February 11, untreated roads might experience significant icing again.