A major winter storm developing just off the East Coast of Florida today is expected to move northeastward to the Canadian Maritimes by Friday, January 5, 2018. This powerful nor'easter is expected to bring snow, ice, rain, very strong winds, and rough surf to coastal locations of the Southeast U.S., Middle Atlantic, Northeast, and into New England Wednesday into Thursday, the National Weather Service warns. The Environment Canada has issued a special weather statements for the Maritimes, warning that significant amounts of snow and damaging winds may result in power outages, travel delays and cancellations, and school cancellations.

A rapidly deepening area of low pressure just off the East Coast of Florida will move northeastward to the Canadian Maritimes by Friday, NWS forecaster Paul Ziegenfelder noted 08:23 UTC, January 3.

In addition, by early Thursday morning, snow will begin to develop over parts of New England and expand into Northern New England by Thursday afternoon continuing into Friday morning. It may very heavy at times over New England.

The snow will end over the Mid-Atlantic by Thursday evening. Additionally, some areas of rain and thunderstorms will develop over parts of Southeast Florida on Wednesday into Wednesday evening.

Meanwhile, a front over the Great Lakes to the Middle Mississippi Valley then extending northwestward into the Northern High Plains and move into the Lower Great Lakes/Ohio Valley to the Lower Mississippi Valley by Wednesday evening. The associated area of low pressure will be absorbed into the greater circulation around the rapidly deepening coastal storm over the Northeast by Thursday morning as the associated front dissipates, too.

The system will produce snow over the Great Lakes on Wednesday moving into the Lower Great Lakes by overnight Wednesday.

1. This winter storm is forecast to bring the potential for a mix of freezing rain/sleet/snow from portions of northern Florida to North Carolina, and snowfall northward along portions of the Mid-Atlantic into northern New England. Blizzard conditions are possible across portions of eastern New England late Thursday.

2. If this winter storm tracks closer to the coast, it could mean more snow while a track farther east could mean less snow.

3. This system has the potential to produce strong, damaging winds possibly resulting in downed trees and/or power outages.

4. Minor to moderate coastal flooding/erosion is possible due to a combination of high tides and wave action, especially Thursday afternoon, January 4. 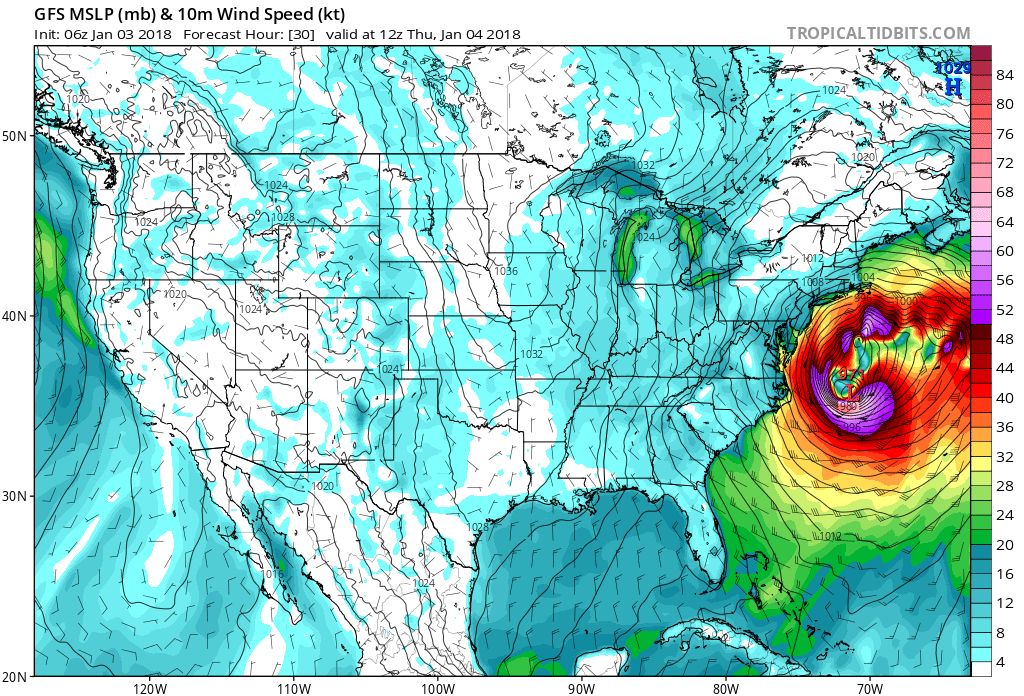 The Weather Channel has named this storm Grayson. Some ice accumulations in north Florida and southeast Georgia will trigger power outages and tree damage, TWC meteorologists warned, adding that Grayson could produce one of the heaviest one-day snowfalls on record in both Savannah, Georgia and Charleston, South Carolina.

The storm system comes as many Nova Scotians have just recovered from a windstorm that swept through the province on December 25, knocking out power to more than 158 000 customers.