Cosmic rays from deep space are increasing almost unabated as the Sun's magnetic field weakens and we head into Solar Minimum.

As reported by Spaceweather.com, the stratospheric balloons they've been flying together with the students of Earth to Sky Calculus since the spring of 2015 show that radiation levels are indeed increasing. This has also been observed on numerous ground-based cosmic ray monitors.

The reason why they are increasing is the solar cycle. Solar activity rises and falls with a period of about 11 years. It rises as we approach Solar Maximum, making it harder for cosmic rays to reach Earth, and falls as we head into Solar Minimum, allowing them to reach and affect our planet and everything on it.

Since we are now on the way toward Solar Minimum, the Sun is becoming increasingly spotless, solar activity is low and the cosmic ray intensity is high and rising.

To show just how much solar activity can affect cosmic radiation on Earth, Earth to Sky Calculus students provided the following graph. Notice a sharp drop at the beginning of September 2017. That's when the Sun surprised many of us with its sudden outburst of explosive activity. 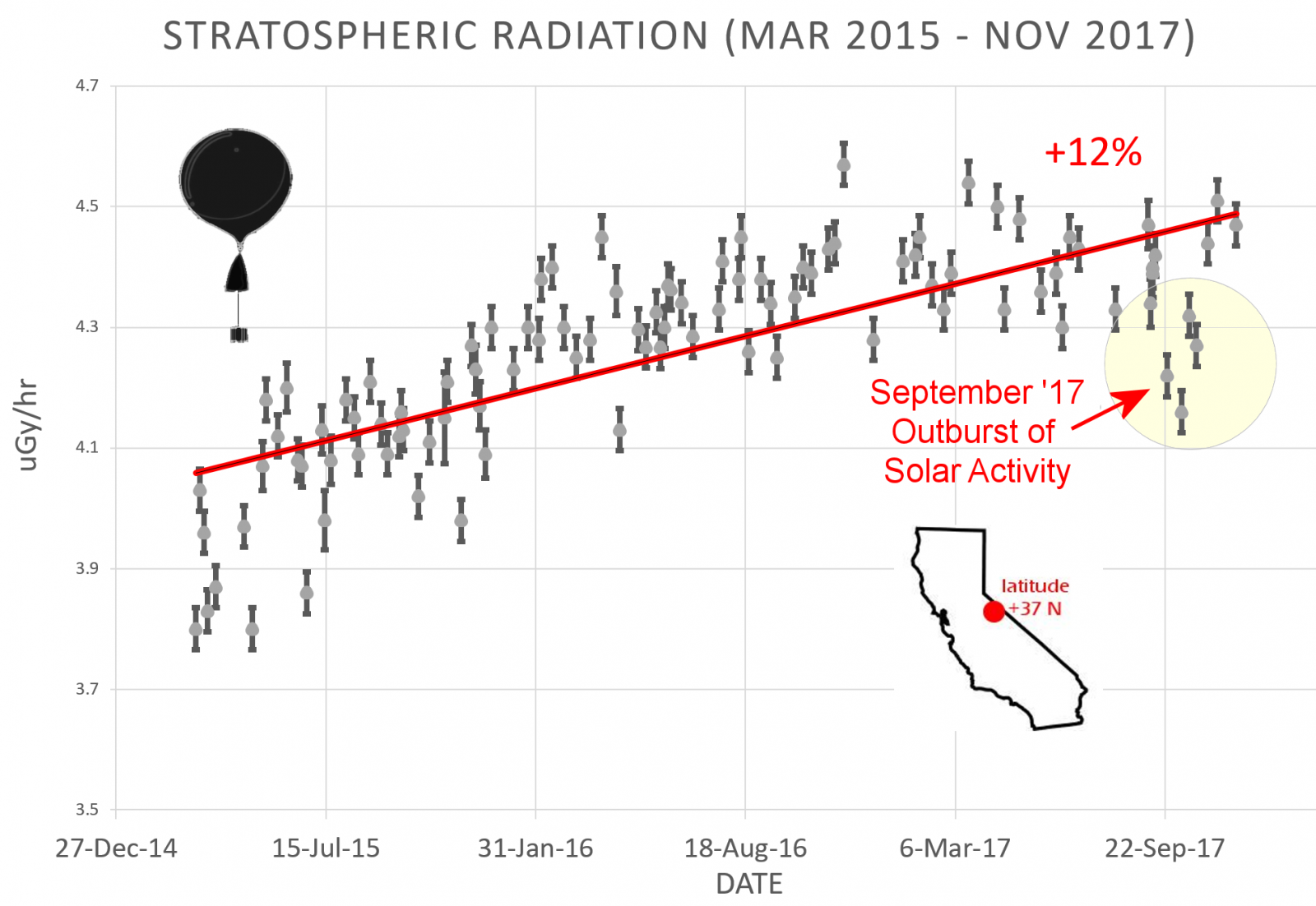 On September 3, 2017, a huge sunspot appeared and in the week that followed, it unleashed the strongest solar flare in more than a decade, hurled a powerful CME toward Earth, and sparked a severe geomagnetic storm (G4-class) with Northern Lights appearing as far south as Arkansas.

"During the [geomagnetic] storm we quickened the pace of balloon launches and found radiation dropping to levels we hadn't seen since 2015. The flurry of solar flares and CMEs actually pushed some cosmic rays away from Earth," Dr. Tony Phillips of Spaceweather.com explains.

"Interestingly, after the Sun's outburst, radiation levels in the stratosphere took more than 2 months to fully rebound. Now they are back on track, increasing steadily as the quiet Sun resumes its progress toward Solar Minimum. The solar cycle is not expected to hit rock bottom until 2019 or 2020, so cosmic rays should continue to increase, significantly, in the months and years ahead."

The radiation sensors onboard their helium balloons detect X-rays and gamma-rays in the energy range 10 keV to 20 MeV. These energies, which span the range of medical X-ray machines and airport security scanners, trace secondary cosmic rays, the spray of debris created when primary cosmic rays from deep space hit the top of Earth's atmosphere.