Strong northwest winds in the vicinity of Katmai and the Valley of Ten Thousand Smokes have picked up loose volcanic ash erupted during the 1912 Novarupta-Katmai eruption and carried it to the southeast over the past couple of days and especially on November 13. Resuspended volcanic ash should be considered hazardous and could be damaging to aircraft and health.

As seen in satellite images, the resulting resuspended ash cloud extends approximately 120 km (72 miles) over Shelikof Strait and Kodiak Island at an altitude of up to 3 km (1.8 miles). 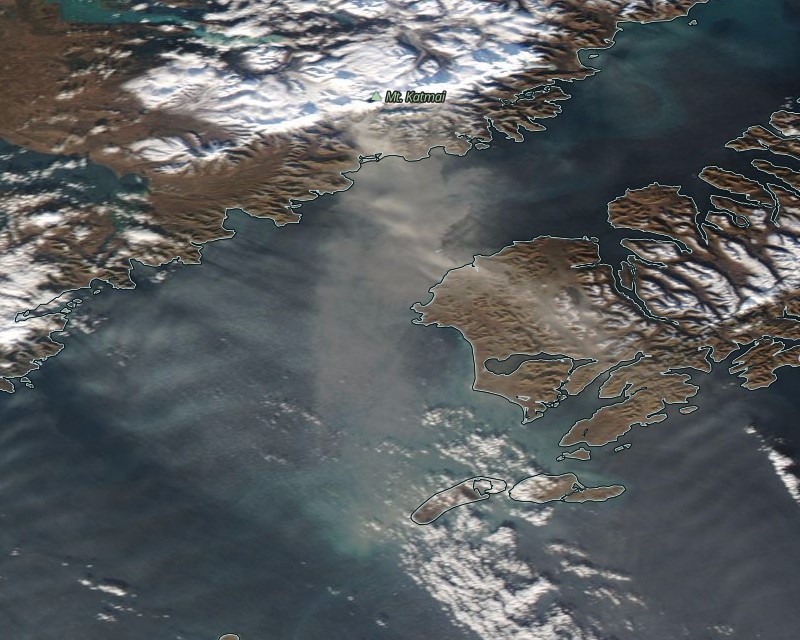 "This phenomenon is not the result of recent volcanic activity and occurs during times of high winds and dry snow-free conditions in the Katmai area and other young volcanic areas of Alaska," the Alaska Volcano Observatory said. "No eruption is in progress. All of the volcanoes of the Katmai area (Snowy, Griggs, Katmai, Novarupta, Trident, Mageik, Martin) remain at color code GREEN."

Resuspended volcanic ash should be considered hazardous and could be damaging to aircraft and health. For more information on volcanic ash and human health, visit the following website: http://volcanoes.usgs.gov/ash/.

The last eruption of this volcano took place in 1912. It lasted from June 6 to July ~21 and had Volcanic Explosivity Index of 3.

Prior to 1912, Mount Katmai was a compound stratovolcano with four NE-SW-trending summits, most of which were truncated by caldera collapse in that year. Two or more large explosive eruptions took place from Mount Katmai during the late Pleistocene. Most of the two overlapping pre-1912 Katmai volcanoes are Pleistocene in age, but Holocene lava flows from a flank vent descend the SE flank of the SW stratovolcano into the Katmai River canyon.

Katmai was initially considered to be the source of the Valley of Ten Thousand Smokes ash flow in 1912. However, the 3 x 4 km (1.8 x  2.5 miles) wide caldera of 1912 is now known to have formed as a result of the voluminous eruption at nearby Novarupta volcano. The steep-walled young caldera has a jagged rim that rises 500 – 1000 m (1 640 – 3 280 feet) above the caldera floor and contains a 250-m-deep (820 feet), still-rising lake. Lake waters have covered a small post-collapse lava dome (Horseshoe Island) that was seen on the caldera floor at the time of the initial ascent to the caldera rim in 1916. Post-1912 glaciers have formed on a bench within Katmai caldera.